The Ebola emergency in West Africa shines a fresh light on the way in which peoples’ everyday actions are critical to maintaining public health.

Trained medical staff and health facilities are of course vital to the response but, in the absence of a vaccine and with few available treatment options, it’s clear that what people do or don’t do really matters. Whether they go for a test and seek treatment if they fall sick; how they look after family members who are ill; and how the dead are mourned and buried - all become matters of life and death. 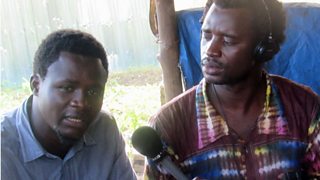 Interviewing people for a programme about Ebola in Sierra Leone.

BBC Media Action has been working on social and behaviour change for over a decade. Responding to the Ebola outbreak is the latest in a series of health interventions that include efforts to improve maternal and child health, and helping people prevent and seek treatment for TB and HIV and AIDS.

Throughout this time we, like many others, have been concerned that we don’t always have sufficiently rigorous evidence about which communication strategies can help shape behaviour and influence social norms, ultimately saving lives. Over recent months, however, two initiatives that we have been closely involved in are helping to change that.

The first was an “evidence summit” led by USAID and UNICEF to investigate what we know about strategies that can encourage practices proven to improve child survival and development. This includes – for instance - childhood vaccination, planning and spacing of pregnancies, breastfeeding and the use of bed nets to prevent malaria.

Findings from the evidence summit have just been published in the Journal of Health Communication and are critical reading for all those interested in improving public health.

The second was a symposium Debates in Change which BBC Media Action held at the Wellcome Trust with the support of the UK’s Department for International Development. It provided a forum for leading thinkers on social and behaviour change from government, practitioner and donor organisations to share learning, discuss different approaches and explore key debates. A summary of the discussions held at the Debates in Change symposium is also available.

At both events, it was refreshing to hear colleagues working across many different disciplines focus on how peoples’ behaviour affects health. Jane Edmondson, head of human development at DFID, for instance told the Debates in Change symposium, that “behaviour and social change is implicit in everything DFID does and tries to achieve”. This is particularly encouraging when so many conversations about improving public health tend to focus on new technologies or on the roll out of health services.

The evidence summit found that we have “passed a tipping point on continuing to question the importance of social and behaviour change to achieve public health outcomes.” In other words, human behaviour and social conventions around gender inequality, stigma and discrimination are of enormous importance when it comes to health.

There is now robust data to support the effectiveness of a number of approaches in improving child survival and development. In different ways and in a number of different contexts, tactics ranging from mass media interventions, interpersonal communication, to cash incentives, transportation vouchers, and mHealth services were found to play a key role in improving health behaviour. The summit organisers argue that today “we can move forward with confidence” to make interventions that will bring about the “behavioral shifts necessary to end preventable child deaths.”

Professor Silvio Waisbord of George Washington University in the US drew another interesting conclusion from the evidence summit – namely that it is important to understand that health challenges that require people to change their behaviour cannot be solved with a one-size-fits-all approach. Recognising this is important given Waisbord’s observation that funders “expect coherent, elegant propositions that generalise and predict that certain stimuli/interventions will consistently lead to certain outcomes.” He doubts that behavioural research will be able to deliver this because of the complex nature of human behaviour.

Instead, bespoke, problem-driven strategies need to be devised to address different behaviours in particular contexts. There is no “formula”, for instance, that can be applied to ensure the kinds of behaviour change that support child survival.

Similar arguments were made by experts at the Debates in Change symposium, who also highlighted the fact that partnerships were key to implementing these tailored approaches. They also noted how rarely those working in different ways to achieve behavioural and social change had the opportunity to come together - as conferences tend to gather together only those who work within media, or only those working in the field of mHealth or only those working with community health workers. One observed that the symposium was helpful because it “demystified different schools of thought on social and behaviour change …. opening up the conversation across traditional silos.”

This feels like a significant moment. These social and behaviour change strategies and partnerships are not always recognised or prioritised in public health strategies in the countries in which BBC Media Action works. They need to be. There are, admittedly, still gaps in our knowledge – for instance we don’t know enough about how changes can be sustained over time. However we do know enough to confidently design and implement programmes that can change behaviour and improve health.

For our part, BBC Media Action is committed to both building the evidence base around effective social and behaviour change strategies and strengthening the community of practice among social and behaviour change practitioners so that stronger partnerships can be formed across the field. These would bring with them potential for greater impact on human behaviour, and more likelihood of saving lives.