The iPhone version of the app is now available from iTunes in the UK and the Android version will follow within the next few weeks.

The main features of the BBC Sport app are explained by the head of Sport Interactive Ben Gallop over on the Sports Editors' Blog. 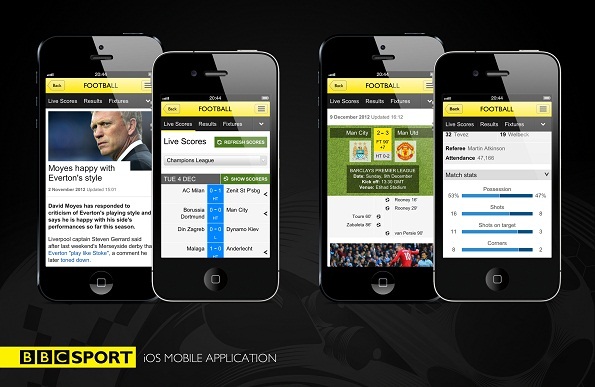 To support the amazing summer of sport in 2012 we focused on delivering a great mobile experience for big events including creating the BBC Olympics app which almost two million people in the UK downloaded.

Like the Olympics app, the Sport app is a hybrid app. It contains the same web-based content as the mobile sport website and adds extra features and functionality using native app technology.

The Sport app allows you to create quick links to your favourite sports using the standard native iOS pattern for adding, removing and re-ordering. We deliberately set out to use patterns that users recognise from others apps and we'll continue to do this in the other native features we'll add to the app over the next year or so.

The Android version still needs some more development work and testing to ensure it works on the wide range of Android devices available and will be live in the next few weeks.

You may notice that some of the links in the app such as the football team pages, stats for other sports and other sport indexes open the old BBC Sport mobile site. The next phase of the app project will update these pages and add this content fully to the app and add football teams to the quick link options.

These updates will be released in the next couple of months. The tutorial screen shown when the app is first downloaded helps explain its key features. This tutorial is always available for reference in the app's Other menu. When updates to the app containing new features are available we'll update the tutorial so that it's clear what is new.

We learned a huge amount from developing, designing and testing the Olympic app and that has helped us hugely while developing the Sport app.

For example we know some Android users were disappointed that the Olympics app wasn't available on larger Android phones and smaller tablets. One of the benefits of building the app around a responsive web product was that it was much easier to build an app that scales to serve larger devices.

As a result the sport app will be available for Android devices with a screen width of seven inches or smaller. We'll also roll it out to the Kindle Fire family too once we've thoroughly tested the app on these devices.

We'll also be adding video to both the iPhone and Android versions of the app in the coming months. The BBC's solution for delivering video to Android devices was recently outlined in a blog post by my colleagues Chris Yanda.

We are developing the app for Apple and Android devices which currently account for approximately 75% of the UK smartphone market. We haven't ruled out developing the app for other platforms but building apps is expensive and as a publicly-funded organisation we have to prioritise the areas where we can reach the most users at the lowest costs.

Users with tablets and other mobile devices will be able to access both the mobile and desktop versions of the BBC Sport website and we will continue to use feedback and usage data to help us prioritise future features and versions.

Over the coming weeks there will be further posts on this blog by key people in the technical and design teams about how they built the app for iPhone and Android devices. Until then we hope you enjoy using this first release of the Sport app and we're keen to hear what other features you'd find useful in future updates.

The BBC Sport app is available for iPhones and iPod touch devices on iOS 5.0 in the UK.

Search for 'BBC Sport' in the iTunes App Store.