Hi my name is Cyrus Saihan and I work as Head of Business Development in the Future Media division of the BBC.

In Business Development we work closely with a range of companies in the digital media and technology space to ensure that the BBC has a high quality presence on consumer devices (TV / mobile / tablet / desktop) and that we are working with third parties to help keep the BBC's digital services as innovative as possible.

Whilst we work closely with many large companies headquartered in the USA and South East Asia, the UK is increasingly becoming a hot-bed of digital innovation.

One of the BBC's six public purposes is "delivering to the public the benefit of emerging communications, technologies and services".

As digital media continues to evolve at an increasingly rapid pace it is important that the BBC keeps up to date with the latest technologies and trends and works with the industry to take advantage of the exciting new advances out there.

We recently reached the 90th anniversary of the first transmission of BBC Radio.

It is interesting to note that it took nearly 38 years for radio to reach an audience of 50 million but it only took Facebook around 2.5 years to reach 50 million subscribers - just one indicator of how technological change is advancing at such a rapid rate. 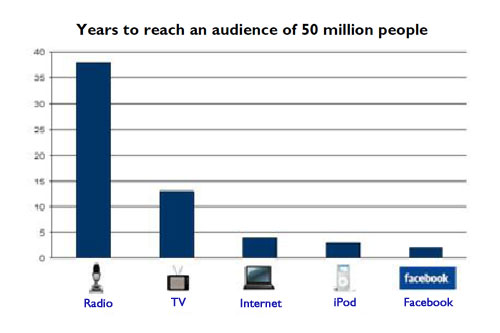 The UK has the chance to play a key part in these exciting changes and the potential of the UK digital and technology industry was highlighted to me a couple of weeks ago when, along with some of my colleagues at BBC Worldwide (the commercial arm of the BBC) and a team of digital specialists from the international agency Ogilvy & Mather, I spent the day hearing from 10 UK based companies about their new digital ventures and ideas.

We based ourselves in the Modern Jago space in the Rochelle School in East London.

Close to London's 'Silicon Roundabout' the Rochelle School is an impressive set of Victorian buildings that are used as a workspace for artists and the creative industries.

We saw for ourselves an example of the 'fruits' of collaboration between art and technology: on the day that we were there a local artist, Dustin O'Hara, had created a game controller that enabled you to play Space Invaders using a pineapple, some bananas and a MaKey MaKey printed circuit board - certainly a different slant on the term 'natural' user interface!

As a sign of the growing importance of the UK technology scene global heavyweights such as Google, Amazon, Intel, Microsoft and Cisco have established a presence in the East London area. 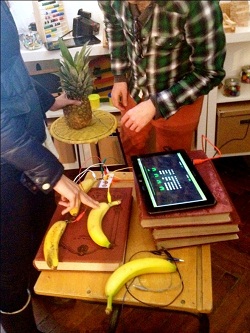 On the day we were there Microsoft were utilising the Modern Jago area to showcase Windows 8 and their recently released Surface device.

As well as some of the largest technology companies in the world East London is also host to a range of exciting start-ups.

We spent the day meeting with a variety of companies who all had very different products and services ranging from social media monitoring and engagement tools to a platform that aims to help storytellers create cross-platform social games and experiences, from an 'Instagram for video' to a 'Twitter for video'.

What struck me was that despite the range of products and services that each company had to offer there were a number of common themes that stood out which all have an impact on how we consume media and communicate with each other.

The importance of mobile and video
According to Ofcom over 40% of UK adults now own a smartphone with the same percentage saying that their phone is the most important device to access the internet.

As a result of the growth in smart phone usage many of the companies that we met with had mobile at the heart of their offer.

Video consumption is also growing at a dramatic rate: YouTube have said that 72 hours of content are uploaded to their platform every minute and Cisco's Visual Networking Index predicts that the total of all forms of video (TV, VOD, Internet and P2P) will be over 85% of global consumer traffic by 2016.

This combination of the increasing popularity of smartphones and the worldwide growth in online video consumption is opening up a number of opportunities for start-ups, new ways for the BBC to reach our audiences and new ways for individuals to communicate with each other.

Information overload
The amount of information that individuals and companies have to deal with on a daily basis continues to dramatically increase: in 2010 Eric Schmidt (Executive Chairman of Google) estimated that every two days we now create as much information as we did from the dawn of civilisation up until 2003.

To help make sense of this a number of companies are developing products and services that help us sift and effectively use the increasing amounts of information out there, extracting simple summaries from the various complex data sets that we are all exposed to.

Sorting information in this way can range from filtering through the 400 million tweets and one billion+ Facebook posts made each day, to the wide range of metrics that a company might need to monitor (website visitors, sales figures etc), to the video clips and images that individuals take and store on their smartphones.

As the amount of information and media that our audiences have access to continues to increase the BBC has to determine how we fulfil our role as a curator of content.

The power of online 'influencers'
As the use and membership of Twitter and other social networks such as Facebook and LinkedIn continues to grow individuals can sometimes wield 'influence' in ways that they might not have previously been able to.

Whilst the number of followers / friends can be an important indicator of influence in the online world (Justen Bieber has over 30 million followers on Twitter and so commands a huge personal audience) the importance of niche and engaged communities is also giving rise to a group of individuals who, whilst they might not have a huge number of followers, are very influential in the areas that they are engaged with.

There are parallels to this with some of our programming output - whilst some programmes, often around niche content areas, might not have huge audiences, the audiences that do follow them can be very passionate indeed.

The companies that we met with were just a small section of the exciting developments in the UK start-up industry and as the themes mentioned above continue to develop I'm sure that we will see further ways for the BBC to deliver on its public purposes and help drive innovation.