We thought the Olympics was the highlight of the year but I’m delighted to tell you that we have broken the 200-million-requests-per-month mark, with 213 million requests for TV and radio programmes last month across all platforms.

This is an increase of +20% year-on-year boosted as usual by the great new autumn TV schedule delivering fantastic stats for iPlayer. 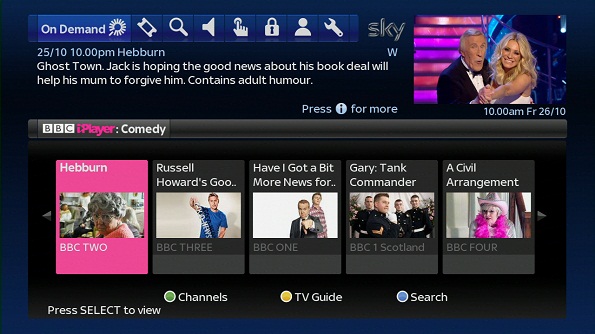 As we also saw during the Olympics, the way people are watching iPlayer on multiple different platforms and devices is changing.

In October 43 million programmes were requested via TV platforms (this includes smart TVs, operator platforms and games consoles) - 20% of all requests - while mobile phones and tablets recorded 28 million and 21 million requests, with year-on-year increases of +168% and +236% respectively, and together now delivering 23% of all requests.

This shows the extent to which internet-connected devices are really starting to penetrate the market and the fact that BBC iPlayer is available on a large range of mobiles and tablets out there.

How this fits with our strategy

One of our key goals for iPlayer in 2012 was to take it beyond the PC and onto a host of different devices, from mobile smartphones and tablets to smart TVs and games consoles.

We want to make it as easy as possible for you to watch and catch up on programmes whenever you want, wherever you want to.

We’re now on over 650 devices and these growth figures really show this strategy is delivering for audiences, making favourite BBC programmes available at a time that suits you.

Last month we launched iPlayer on Sky+ which was a key milestone for us as it means audiences on all major UK TV platforms can watch, listen and catch-up on the best BBC programmes in their living room, whenever and wherever they want.

And earlier this year we launched BBC iPlayer on Xbox - meaning we’re now on all major UK games consoles.

We see internet-connected TVs as the platform of the future.

It’s no big surprise that when at home, audiences like to watch TV on the best screen in the house - the TV. And it’s not just us thinking this.

YouGov recently published the latest wave of its ‘Smart TV’ study which found that the proportion of people who are looking to buy a smart TV is on the rise.

Behind live TV viewing, catch-up TV services like iPlayer are the second most popular activity for smart TV owners, used by a majority of people with these new devices.

So, with this in mind we wanted to let our audiences know that this is exactly what they can do. That’s why we’ve just launched our new BBC iPlayer TV advert - ‘Telly on your Telly’ - talking about just that - watching TV on your TV.

Click here to see the advert for yourself and as always, really keen to hear what you think of it.