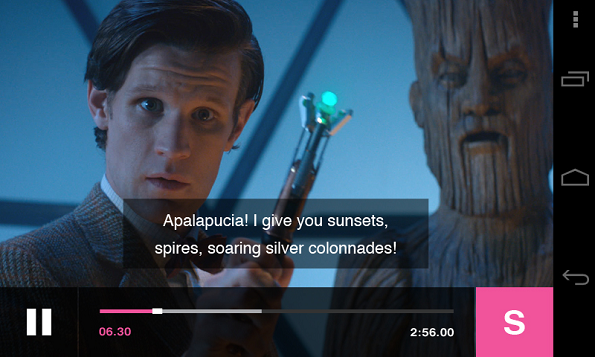 Today the BBC's mobile technical teams have begun rolling out a new way of securely playing video and audio content on Android phones and tablets. It's called BBC Media Player and we are starting to use it with the mobile view of the BBC's iPlayer website. Next week we plan to release a new version of BBC iPlayer on Android which will use this player. Other applications and websites will follow.

We want people to have the best experience possible when they're watching BBC TV programmes or listening to BBC radio programmes. This means, amongst other things, making them available on as many devices as is practical.

I want to reassure you that Android is an important platform for us. And I know (not least from the comments on David Madden's recent post) that this platform is an important one for many of our users. We've supported iPlayer on Android since June 2010 .

The Android operating system is constantly evolving and has been upgraded several times in the last two years. Back then version 2.2 (FroYo) was the latest OS. Today the latest version is 4.1 (JellyBean) and in between we've had Gingerbread, Honeycomb, and Ice Cream Sandwich.

As many of you are aware, we chose Adobe Flash as the media format to stream to Android devices. Doing so provided us with a number of cross platform efficiencies as the same infrastructure can be used for delivery on PCs, Android phones, and set-top boxes.

Adobe's strategic decision to remove support for the Flash Player plug-in meant that we had to change the way that we play back this content.

We looked at a number of solutions, but there were a few key points we had to keep in mind:

1. We needed a solution that would work on the newer Android devices running the JellyBean operating system.

2. We also had to cater for the all the devices which are still on earlier OS versions. The diagram below shows that vast majority of Android users are on Gingerbread and FroYo.

3. We needed a solution which would work both for our websites and for our native Android applications.

4. We needed a solution which would meet the security obligations we had agreed with our rights holders.

5. We needed a solution which would not require a significant and costly change to our current infrastructure.

Platform version information from developer.android.com for the 14 day period prior to 4 September 2012

We looked at a number of different solutions, for example, Http Live Streaming (HLS) which is used to stream BBC media to other platforms. Unfortunately, HLS isn't supported on Android OS versions prior to Honeycomb.

In the end, Flash was still the best choice of media format for us to use. And the only practical technology for us to play this format back on Android is Adobe Air.

We are keenly aware that mobile development is a fast-changing environment and that this approach may have to adapt in the future. We also wanted a generic simple application that would be as transparent as possible, both for users of our websites and users of our native applications like BBC iPlayer.

For these reasons, we decided to go with a separate application that we've called BBC Media player. This approach allows us to focus on solving all of our media playback challenges in one place and in one app. Any improvements that we make will benefit everything in the BBC that uses the Android platform.

We are making this change with our eyes open. No technology is perfect. We've seen some of the challenges that other Adobe Air based apps have had in the marketplace and so we have worked hard, both internally and with our technology partners to build the best application we can.

Adobe have been a long-standing collaborator with the BBC and have been excellent throughout this process, working closely with our teams to ensure continuity and a great experience throughout the London 2012 Olympic Games and then thereafter to support our requirements around this project.

We have put a lot of work into BBC Media Player and we think it will improve your experience of watching BBC TV and listening to BBC Radio on your Android phones and tablets.

We will continue to work on this application and on improving media playback and mobile experience on Android smartphones and tablets. The team and I would love to hear what you think about this approach and how well this new application works on your device.