Digital Olympics: week one in numbers

It's the end of the first week of London 2012, a week that's seen record numbers of people accessing the BBC's Games coverage online and across mobile, tablet, connected TV and Red-Button. As data flows in, my team and I have been looking at exactly how the Olympics is being consumed by audiences across devices.

There are three key insights we observed:

We promised Games coverage that you could access anywhere, any time, and it looks like you've been taking us up on that offer.

So let's have a closer look at the stats.

Overall browsers to the BBC Sport website, and the 24 Olympic Red Button streams, have built to huge numbers across the Games so far. A total of 17 million people have watched the 24 Olympic Red Button streams for at least 15 minutes, and we have recorded 18 million unique browsers to the Sport Olympics webpages - with a daily peak of nearly 8 million (UK) and 10.4 (Global), compared with the previous Sport site record of 5.7m (UK) and 7.4 (Global). 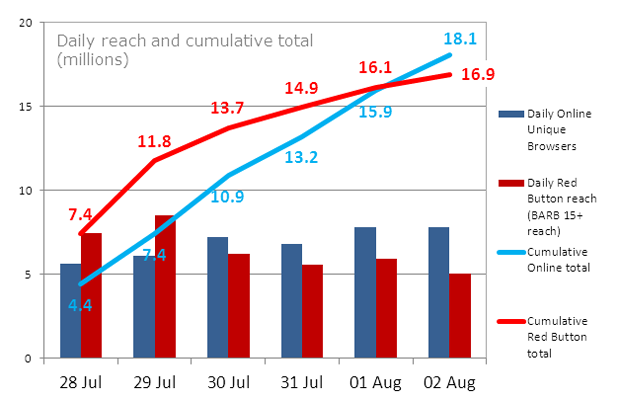 We knew before we started that video would be the heart of our Olympics offering, and the data supports our strategy of ensuring every sport from every venue is available to stream: we've seen 29 million total requests for video content across bbc.co.uk/sport since the start of the Games, and the Sport site has seen an uplift of +80% in daily unique browsers.

Browsers across each of the online "four screens" (PC, mobile, tablet and connected TV) have all seen an uplift in daily unique browsers of +70% or more since the start of the Games. The number of people accessing BBC Olympics content on mobiles is huge - we saw a peak of 2.3m mobile browsers on Wednesday - and as of today over 1.5 million people have downloaded the BBC Olympics smartphone app on Android and iOS. 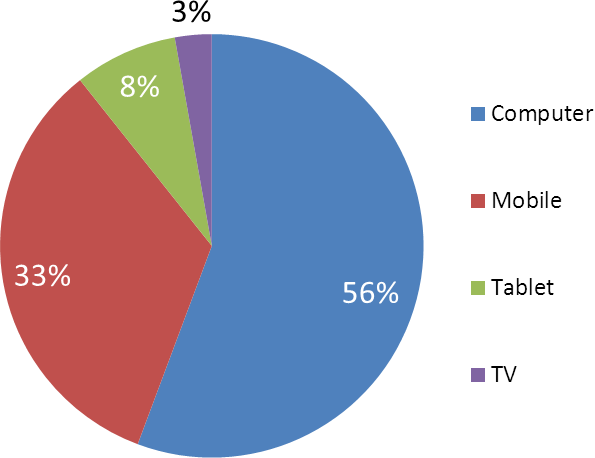 We saw interesting differences in platform usage at different times of the week. Audiences tend to watch more on PC during the week, while accessing coverage across mobile, tablet and connected TV more during the weekend. 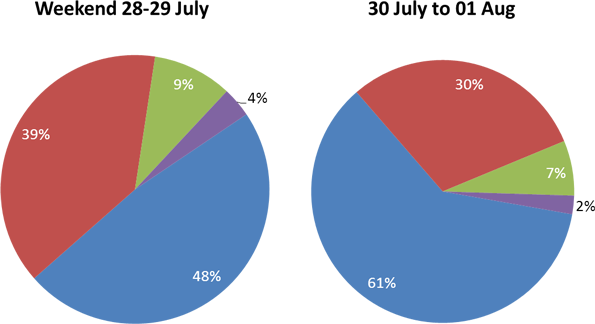 % of Unique Browsers By Device Type, split between Weekend and Weekday (legend as above)

It's been a thrilling week for Team GB, and there have been a number of large peaks in traffic as audiences switched on to watch the medal wins.

Wiggins was popular on Red Button too: we saw a peak of 657,200 people watching him win Gold, rather than on the traditional TV channels. However, we get bigger audiences on Red-Button at the weekend when viewers are at home, so the biggest event so far has been the Men's Road Race with Mark Cavendish which drew an audience of 1.3 million. 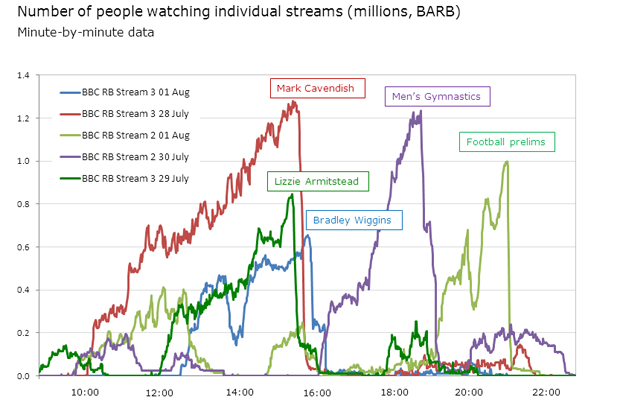 Red Button data has proved particularly fascinating with every single Red Button stream seeing at least 100,000 viewers at some point. The chart below shows the percentage of viewing to each stream. We schedule a variety of sports on all the streams, with the most high-profile on the lower numbered channels. 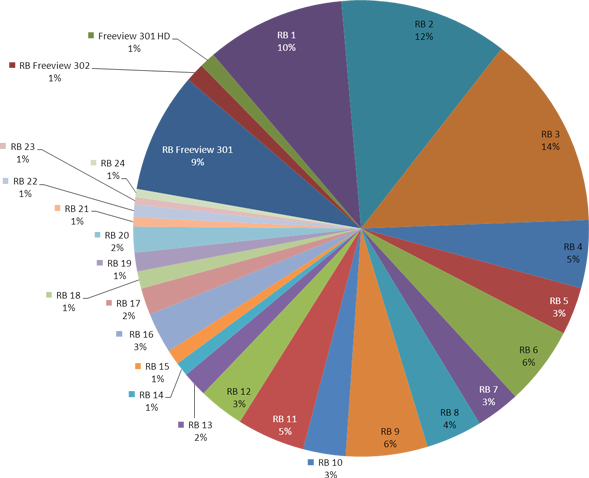 How have you been watching?

We should, of course, put all these stats in perspective: the majority of you are enjoying the Games via flagship coverage on BBC1 and BBC3 on your televisions, especially in the evenings. Our broadcast coverage has been breaking records too: BBC TV viewing of London 2012 has beaten the whole of Beijing in the first 6 days alone. 45.4m have watched at least 15 mins of the Games.

So how have you been watching? There's been an amazing amount of buzz on social media about the BBC's digital coverage, much of it suggesting that we really are in a multi-device world.

Watching @bbcsport on iPad in car on way to London @j_ennis = AMAZING!!! #TeamGB

Realising you can watch the #olympics on your laptop on the bbc website from the comfort of your own bed. Life made.

thanks bbc app! can watch the Olympics on the go! everyone's a winner!

I love the @bbc2012 Olympic App! So much info AND there's a live feed! Just watched @beckadlington swim on the bus back from Hyde Park

So much sport! The @bbcsport coverage is amazing! Job well done @rogermosey! Archery on TV, & Rowing on the app! #MultiTasking

I'd love to find out how you're enjoying our coverage and what devices you have been using - or if you've had any problems with it. Let me know in the comments.

Cait O'Riordan is the Head of Product, BBC Sport and London 2012