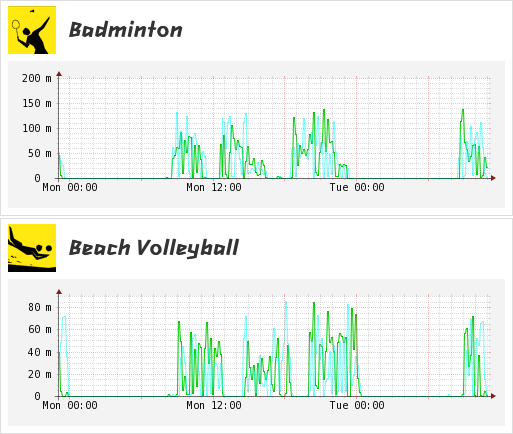 Monitoring data for badmington and volleyball during the 2012 Olympics

Twelve months ago, there were three of us in the new Olympic Data Team: product manager Oliver Bartlett, developer David Norris, and I, David Rogers, as technical lead. We were tasked with providing data for the BBC's Olympics 2012 project: stats, events, results...

Today, we are a team of 20, we have built five applications, provide 174 endpoints, manage 50 message queues and support ten separate BBC Olympic products - from the sport website to the Interactive Video Player.

Over the course of the games, we expect to process over four million messages, such as athlete profiles, diving events from the Aquatic Centre or the latest medal table for Team GB. Throughout the project, there have been two distinct, but closely-linked objectives.

Firstly, we needed to build a high-throughput, low latency message processing system, making sure the facts and figures emerging from the Olympic venues were available, throughout the BBC, quickly and accurately.

Secondly, we wanted this data to be part of a wider story, ensuring the wealth of BBC content, such as news, blogs, galleries, video and live commentary could be seen alongside the live data, and presented to suit a range of audiences. This second objective is best exemplified by the 10,490 athlete pages on the BBC sport website, each offering a dynamic and meaningful aggregation of content, all based around an individual Olympian.

The feed we receive from our data provider, DeltaTre, is a high-throughput XML feed.

We needed to build a system that was capable of receiving and processing thousands of messages every minute.

We needed to be able to prioritise the messages, so that we process the real-time data before the bulk updates. For example, when the triathalon finishes, we receive a detailed statistical update for every competitior. These messages can wait, what we really need is the result. To ensure we receive the most timely information first, we split all messages into a set of 50 queues, we then tune the processing rate for each queue to make sure we can show the most up-to-date view of the Olympics where it really matters.

TRiPOD 2012, DSP and the Triple Store

The second objective of the project was to take the data feed and weave it seamlessly into the rest of the BBC Olympic content, using linked data in our triple store. To achieve this, we have integrated the Olympic data with the BBC’s Dynamic Semantic Publishing platform - developed for the FIFA World Cup 2010 and blogged about by my colleague Jem Rayfield. This approach, in the context of the Olympics, can be summarised by the following 3-step process:

The resulting system fuses these two objectives into a single service, allowing applications to leverage both the real-time XML data, and the richly interconnected semantic data. 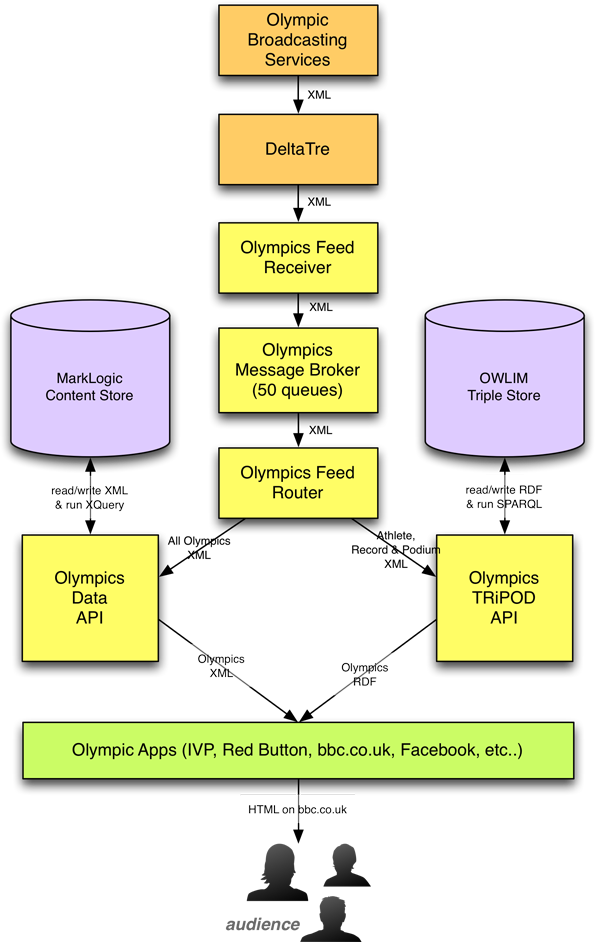 Racing the video into the IVP

The Interactive Video Player is the most complex, but in my opinion, most exciting online offering from the BBC for the 2012 games.

It shows any one of our 24 high-definition video streams, but also provides an interactive panel showing real-time stats about the events taking place in the video. This behaviour represents a significant challenge.

Our AV teams have invested greatly in reducing the latency for our online video output, crucial for live events during an Olympic Games. Unfortunately, the lower the video latency, the less time we have to provide the accompanying stats.

The diagram below shows how we modelled the various latencies, delays and caching layers involved: 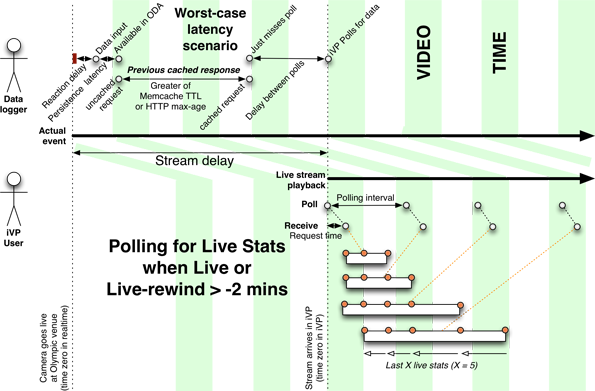 Modelling the dataflow, from the venue to the screen

We explored two competing methods of providing stats to the IVP:

Both methods have been used, the first method for video-on-demand, and the second for live video.

Here, the two methods of obtaining stats are compared.

The trickiest aspect of this two-method approach is to transition between the two methods.

When watching the IVP, it is possible to ‘time-slip’ if the connection is poor. If the user drifts back over two minutes, they will shift from method two to method one. We used a technique of ‘snapshots’ to overcome not just these transitions, but also the times when an audience member moves around the stream, for example, returning to live after watching a goal from 20 minutes ago.

Prior to the games, we did prototype ‘push’ technologies such as long-polling to solve the same problem. Unfortunately, this was too great a technical challenge to solve in time for the games, particularly given our requirement to scale to millions of users.

As the video latency reduces, ‘push’ will become the only viable option for real-time stats.

The domain of Olympic sport is both deep and broad.

We have had to deal with schedules, video logging, statistics, athlete meta-data, photos, medal tables and more.

Within each type of data, there is a huge variety according to sport.

For example, football schedules are arranged into two distinct phase: league and knock-out, with each match comprising two teams, where each team is comprised of a squad of players. Events within a match include red cards, fouls, half-time and goals.

By comparison, this is how Wikipedia describes ‘Individual Archery’ competitions:

“64 archers compete. The competition begins with the ranking round. Each archer shoots 72 arrows (in six ends, or groups, of 12 arrows). They are then ranked by score to determine their seeding for the single-elimination bracket. After this, final rankings for each archer is determined by the archer's score in the round in which the archer was defeated, with the archers defeated in the first round being ranked 33rd through 64th."

This complexity is represented within the XML, where the the schema for each type of XML we receive can be extremely complex, having to represent varieties between sports, events, and even different phases of the same event.

In addition to this, like most software projects, the requirements were subject to frequent change.

Within this context, we needed to build a system to ingest, process and provide this data.

To achieve this, we adopted two approaches, "light-touch" and "best-effort", and relied on an XML Database:

We chose not to validate or model the content of the XML unless absolutely necessary. For example, take the medal table. If possible, we could receive the XML, identify that it represented a medal table by examining a single element, and from this point onwards, ignore the rest of the contents.

In reality, we needed to verify, route, process or enrich most of the data.

Where this was necessary, we only accessed or manipulated a small proportion of the XML. Using this approach, our data provider could make significant changes to the structure of the XML without any changes to our APIs necessary.

Ultimately, our clients - the systems that created visual representations of the data - would need to use the more complex, domain-specific detail. These clients did not, however, have to wait for us to update our models, schema or validation logic.

Closely associated with the approach above was the idea of ‘best-effort’ responses. This was the idea that, whatever the circumstance, it was better to delivery some content, within a known timescale, rather than nothing at all. This would leave the client the option to gracefully degrade the user-facing content as they saw fit.

Behind this principle is the knowledge that we will not have many options for updating and re-releasing our systems during the two-week window of the games.

Given the timescales, this project would not have been achievable using a SQL database, which would have pushed the design towards more complete modelling of the data.

Using MarkLogic, we could write a complete XML document, and retrieve that document either by reference to its location, a URI, or using XQuery to define criteria about its contents.

For example, all documents matching a particular XPath could be obtained.

When building a complex software product, the common sense approach is to get the software in front of your customers as soon as you can. We’ve done this where we could - we had pages-per-athlete, venue and event ready early in the year. We used the Interactive Video Player for Euro 2012 and Wimbledon.

The problem is, without an Olympics Games happening, you have neither realistic data, nor the audience levels, to genuinely put the product to the test.

To get around this problem, we have invested a significant proportion of our efforts to simulate the Olympics. The most obvious manifestation of this was the Olympics Simulator application. This allowed people around the business to set up streams of data which could simulate anything from an athlete registering for the games, live stats for different sports, video logging information or medals being won.

The simple interface provided is shown below. 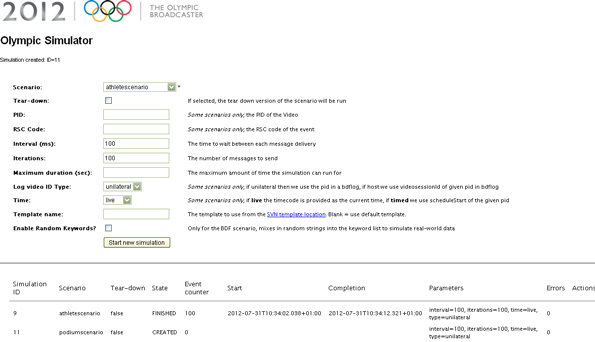 These streams of data could then be synchronised with video to provide a rich and dynamic user experience on bbc.co.uk, or our test environments, without waiting for the Olympics to begin.

There is no dress rehearsal

Whilst simulations, load testing, stress testing and end-to-end testing have built a lot of confidence, we were still facing a ‘big-bang’ on July 27th when two things happened:

To give ourselves flexibility, we have created a number of ‘knobs and levers’ to control our applications in production.

These include the following:

We may discover during the games that the pattern of events is not what we expected; being able to change how we respond to these different events will allow us to fine-tune the user experience in real-time.

Creating systems, libraries and techniques that could be used beyond the games was crucial for this project. We wanted this unprecedented investment in the Olympics to have lasting, tangible benefits for the BBC and its audience.

Here are some of them:

With the Olympics now underway, we’ve had a chance to see these approaches used for real. Whilst we have had to make use of our ‘real-time controls’ to adjust and fine-tune the user experience, I believe we have created something that sets the BBC apart for this first ‘digital Olympics’.

I look forward to reading your comments.