The story of the digital Olympics: streams, browsers, most watched, four screens

The first week of the Olympics ended with some record breaking stats for BBC Online.

Since I posted at the end of the first week of the Games, Team GB have broken records of their own, winning the most medals of any British Olympics team since 1908. The once-in-a-lifetime success of our athletes has driven equally incredible engagement from audiences with our Olympics coverage.

With London 2012 at an end, after a spectacular Closing Ceremony last night, I'd like to take this opportunity to tell the story of how the BBC's audiences enjoyed the first truly digital Olympics.

The Olympics in its entirety

The BBC's promise was to deliver coverage of every sport from every venue, and we certainly achieved this with our digital coverage: from the blue ribbon events like the 100m final all the way to the first taekwondo heats, the multi-faceted entirety of the Olympics was available to watch throughout the day across online and Red Button.

Overall, this comprehensive coverage drove very large amounts of traffic to the Sport website and to Red Button channels. 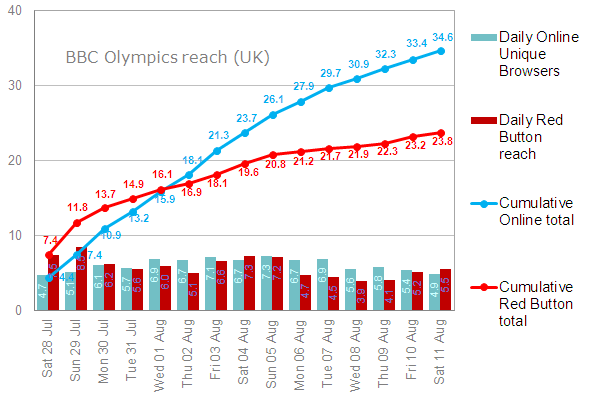 And the peak audiences for Team GB's medal moments were bigger than anything we've ever seen. Over a 24 hour period on the busiest Olympic days, Olympic traffic to bbc.co.uk exceeded that for the entire BBC coverage of FIFA World Cup 2010 games. On the busiest day, the BBC delivered 2.8 petabytes, with the peak traffic moment occurring when Bradley Wiggins won Gold and we shifted 700 Gb/s.

BBC Sport Online's most requested live video stream was of the Tennis Singles Finals, where Andy Murray and Serena Williams were victorious. You can see the rest of the top ten below:

Audiences quickly grew accustomed to being able to switch between up to 24 streams. In between the peaks of Team GB medal moments, our data clearly shows people moving across streams to check out a whole host of different events. For example, around 6pm on Saturday 4th, audiences finished watching GB Gold in Women's Team Pursuit Cycling on stream 7 to take a look at the end of Brazil v Honduras in the football on stream 6, before switching back to stream 7 as the cycling action kicked off again.

And while team GB's medal moments drove huge traffic, at the same time less flagship events were getting attention on other streams: at lunchtime on Monday 30th, while a lot of people were watching swimming on stream 1, more people were concurrently watching weightlifting on stream 12.

Below is a snapshot of the action across a select six Red Button streams on Wednesday 1st August, the day Bradley Wiggins won his record-breaking Gold. 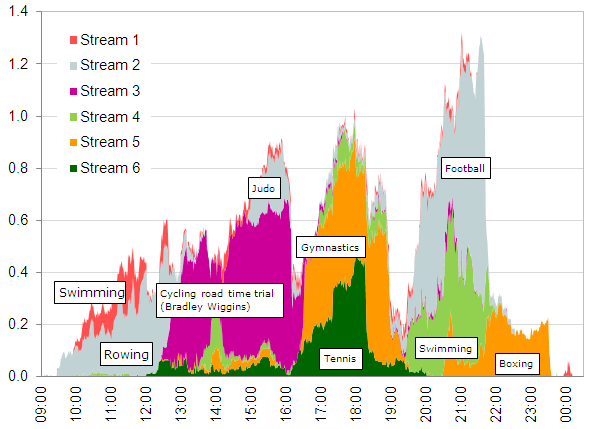 We wanted to offer the whole breadth of the Games to audiences.

It's been hugely gratifying to see from our data that they embraced our comprehensive coverage: we saw over 106 million requests for BBC Olympic video content across all online platforms

The Olympics wherever and whenever you want it

Offering everything isn't enough in the age of multiple devices: our further ambition was to ensure audiences could access our coverage wherever they were, and whenever they wanted it. For a lot of our audience, that place was, of course, on television: overall our Olympics TV coverage (TV channels and Red Button streams) reached 51.9m people.

As I've previously observed, this has really been the multi-platform Games, where audiences have consumed our content across PC, mobile, tablet and connected TV at different times of the day.

Our data below splits out the four screens across 24 hours, to reveal some key insights:

Tablet usage reaches a peak at around 9pm: people using them as a second screen experience as they watch the Games on their TVs, and also as they continue to watch in bed 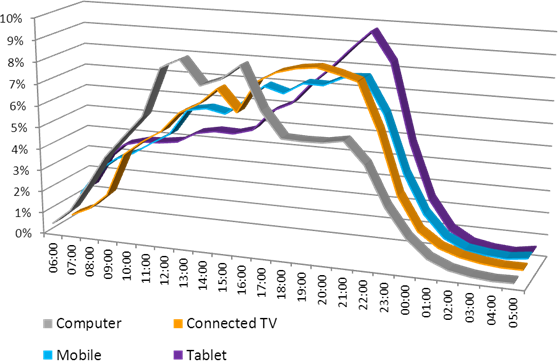 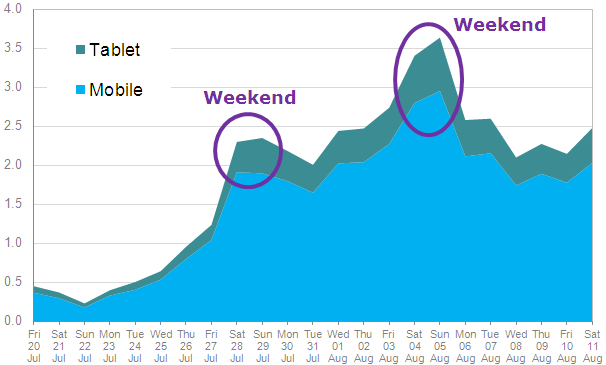 Consumption of video content on mobile has been perhaps the key takeaway from the two weeks: we saw 12 million requests for video on mobile across the whole of the Games.

We've had 9.2 million browsers to our mobile site and Olympics app over the course of the Games (and over 2.3 million browsers on tablet). While PC and tablet usage has generally peaked and dipped at different times of the day, mobile consumption has increased steadily from the morning to a plateau in the early afternoon, before dipping away in conjunction with TV viewing in the evening. It's obvious: people have their mobiles with them 24/7, and have been using our app and mobile site to keep up to date with the action wherever they are.

@arealthomastse Too late, he stole the Gold medal. Skip to Chapter 5, Gold Medal point for the over the top reaction. https://www.bbc.co.uk/sport/olympics/2012/live-video/p00w3151

With so much content available across multiple devices, our final challenge was to ensure that audiences could find the things they wanted to watch. Our aim was to put audiences in control of their Olympics experience, transforming the way they could navigate through the huge breadth of coverage using the extra features of the interactive video player.

The chapter marking feature, enabling audiences to go back to key event moments instantly, received an average 1.5 million clicks per day. The chapter marker for Bolt's 100m Final win was clicked on more than 13,000 times.

We invested in delivering the first truly digital Olympics to ensure that our audience had a fantastic experience during the two weeks of the games.

But we also wanted to ensure that the BBC was in the best position to continue to deliver great experiences for years to come. The infrastructure and video delivery systems we have put in for the games will be used for future coverage for both BBC Sport and the rest of the BBC. And all our Olympics video content will be able to watch online on the BBC Sport website until January 13th.

We also hope to leave a lasting legacy in terms of audiences to BBC online. Over the course of the Olympics we attracted huge numbers of new users to our BBC Sport interactive services and we hope that having enjoyed our digital video coverage they will be back for other events the BBC cover in the future.

The digital development teams in London and Salford as well as our commercial partners have worked incredibly hard for months to ensure that we delivered what we set out to do for 2012. Our editorial colleagues have worked around the clock delivering the video and text coverage that our audience loves. I am so glad all that work has paid off with massive audiences enjoying the games across a multitude of devices. The feedback via email, social networks and on the blogs has been genuinely overwhelming.

But no one has worked harder than the athletes in the Olympic venues. Without them rowing faster, pedalling harder, running quicker and boxing better than their competitors, Team GB wouldn't have delivered so many gold medals. And it is those gold medals that people have come to our digital coverage to watch in their millions.

Cait O'Riordan is Head of Product, BBC Sport and London 2012