As part of my role I run the Children's Future Media Games Stream which is responsible for developing all of the games on CBBC and CBeebies websites - overseeing agency builds as well as making many hugely successful in-house games.

Making games for children demands a huge amount of specific knowledge about how kids use computers, appropriate cognitive load and how to maximise engagement. The most important factor of all is fun, and making sure that fun is at the core of all BBC Children's games.

We spend a lot of time working with children while testing our games to ensure we maximise their input into our development processes. When invited to get involved at Games Britannia we jumped at the chance to let the kids lead on the game development front while we facilitated.

Games Britannia is a schools video game festival featuring 5 days of hands-on interactive workshops and lectures from leading figures in the games industry.

If the UK is to be a hub for the video games industry, more focus needs to be put on how to write software than how to use it. This is at the heart of what Games Britannia is trying to achieve. The great and the good of the UK games industry, from Namco and Sumo to Bafta Games and UKIE, were drawn to such a noble cause.

paper prototyping at the workshop

Most of the kids who signed up for the CBBC game workshop were Key Stage 1 (5 to 7 year olds) with some Key Stage 2 (7 to 10). Our aim was for each team of children to build a working game that they could access online from their home computers after the workshop.

It was felt that programming would be too advanced given the available time. However game design is a discipline that we could cover which would allow a great deal of creative freedom. We wanted the attendees to feel inspired that they could create as well as consume.

To enable this, we developed a two hour workshop session that would allow multiple teams of children to first examine the constraints around a game, develop an idea, frame a game name and description, then to design a lead character, paper prototype and finally construct a scene into a game. 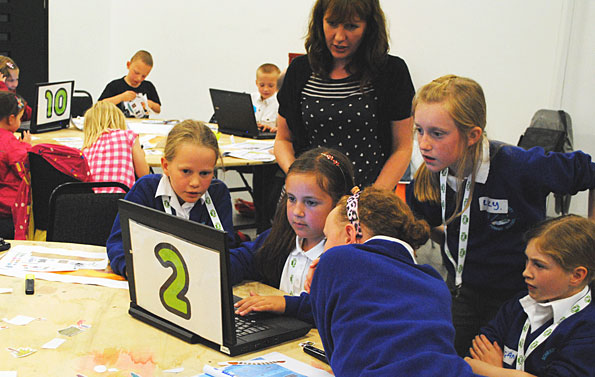 A character animation system was built that would allow a paper template design to be easily transferred and automatically animated into a game.

An optimised line-intersection physics system was developed which plugged into our game engine and level editor.

This gave the kids an environment for easily putting 'platform' games together. Platformers are still hugely popular and the most played game type on the CBBC website.

Into this system we added some great looking characters and themed assets - a wonderful array of digital building blocks. 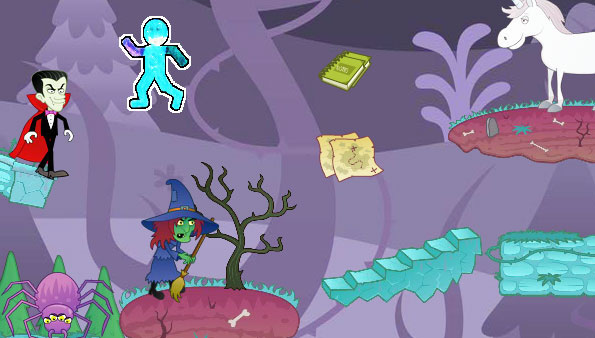 We were able to keep the explanations of how the systems worked to a minimum by keeping the palette of available mechanics simple. All non-player characters had one of just two collision behaviours - either they sent the user back to the start point or the user was flung high into the air. These two behaviours allowed for some very sophisticated challenges to be implemented by the kids. It was amazing how quickly game design techniques were understood by such a young audience. Very advanced conversations quickly sprung up across the different teams about how to construct a puzzle or a problem that would be challenging to the end user.

The unbridled joy on the faces of the participants extended from the kids to the BBC team who came along to help. The team - a discipline mixture covering game developers, designers, producers, project managers, and researchers - all volunteered to take part feeling that here was an opportunity to get at the heart of what makes our core audience tick. The audience insight gained from engaging with kid's creativity in the game space will surely help drive future games on BBC Children's.

It was amazing to observe the wide palette of influences that children draw from in a creative situation. Typically a veteran gamer would have a very parochial view of what makes a game, but here ideas flowed that didn't seem shackled by convention - and that is great to experience.

While at the Games Britannia event, Children's FM and CBBC hosted an expo stand allowing children and teachers to connect first hand with our product and teams. This provided a great opportunity to interface with our audience and talk openly about core ideas, likes and dislikes. 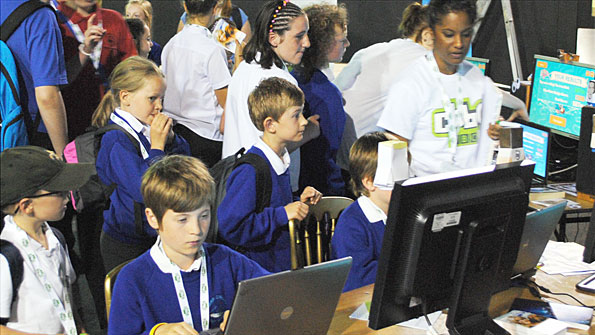 For added fun, we ran a qualifying session for the right to play new Blue Peter game Jet Boat Barney live on the main stage to set a new gaming world record. A hugely successful endeavour - we now have a world record holder!

It needed to be easy and quick to play, require some skill, have gradation for world record separation, and lots of fun. The game is going to be launched online later in the Summer.