I'm delighted to say that we released a News App in Russian for the iPhone yesterday.

You can find the BBC News app (Новости Би-би-си) in the App store and get stories, breaking news, and video in Russian delivered straight to your mobile.

This is the latest step in a long history of Russian output. World Service Radio started broadcasting the occasional show in Russian in 1942 (see slide 11 on the link), and became a full service in 1946.

Since last year the service has been internet only and BBC Russian is a full service news site, with 30+ articles a day along with audio and video content, the best of which is now available in the app.

Unlike the website however, the app allows you to browse offline. This should be very useful for anyone with variable internet access; we also know that some of our audience simply prefer using apps to the browser on their phones.

How we built and tested the app

This is the first foreign language app the BBC has produced and we hope there will be many more. However, building an app for all the World Services's 27 languages on every platform would be hugely expensive. So, we hope we have an innovative solution to this, by using a system called PhoneGap, which allows you to develop apps for a number of operating systems from a single codebase. This should allow us to roll out not only the app code to more of our languages, but also the Russian app to other operating systems such as Android.

We're starting with Russian both because of the elections taking place on March 4, but also because the Cyrillic alphabet is actually less of a problem than may appear. Russian reads left to right, and has a limited number of letters - so although the text takes up slightly more room, the app can follow an English language pattern relatively easily. This is how Vladimir Putin's is written in Latin, Cyrillic, Arabic, and Hindi: 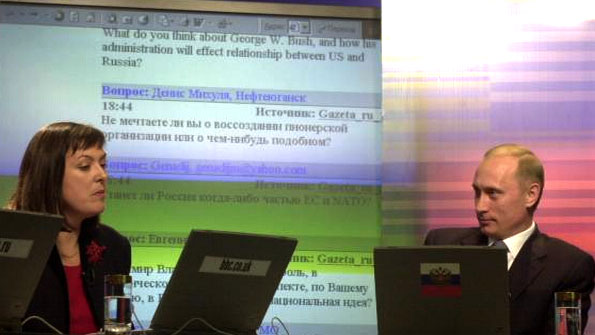 The BBC's Bridget Kendall and Vladimir Putin in a News Online web chat, 2001

Testing however is a proper challenge - even our native speakers in London can't test the performance of the app in Russia itself. So, for this app we have worked with a company called uTest who supplied us with an army of testers across Russia. These guys charge per bug found - so it's obviously worth our while to get as perfect a version as possible before we send it to them; but they found a few obscure bugs which we have now corrected.

As a manager, you are often claiming credit for presenting work other people have actually done - and this is particularly true here as work had started before I joined the World Service team. So I'd like to take this opportunity to thank all who have worked so hard to get this app out. I would be very pleased to hear from any Russian speakers as to their experiences with it.