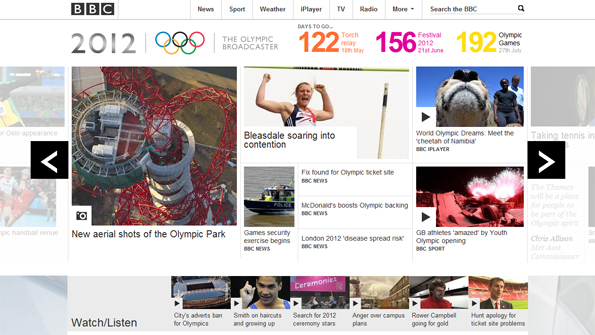 It's been a dark, dank, cold, grimy, drab and frankly 'orrible start to the year.

However there have been some interesting stories about BBC Online. Here are five to tickle your jaded palate.

1. BBC Sport has announced that its website will be relaunced in February. (If you were lucky enough to be at the BBC Online Industry Briefing in November you would have seen a tiny taster).

The new year has brought a new look for the BBC Olympic 2012 site. Roger Mosey has responded to some of the comments raised on his blog post:

@Andrew Yes, this is a portal only. Content is created across bbc.co.uk and manually placed on the portal. Without it, there wouldn't be one single place where you'd see everything we're doing about the Olympics and all things 2012... Where possible, we're inserting text or graphical links back to the portal in every relevant item of content. Providing the user sees the link, they can navigate back in this way.

2. Our very clever colleagues at BBC Research and Development are investigating
"An Affective Interface for Mood-Based Navigation". Or as Rosie Campbell puts it:

The problem of mood subjectivity will need to be addressed; since something I find humorous may not be so funny to you (this became apparent in our user trials where many people rated a serious documentary on 70s fashion as very humorous...)

3. An article in the Guardian "BBC considers charging viewers for archive TV shows online" unleased some speculation and chatter including this from the Register:

...the debate, while in its infancy, is stimulating some fascinating responses. Lifelong freetards who refuse to pay for media content vow to pay for iPlayer shows, because they value the BBC. While BBC supporters baulk at paying twice...

Just to be clear, it's worth quoting the original Guardian article at length:

However, a spokesman for the BBC said that this is not a "two-tier" licence fee system, but a micropayment to cover costs including payments that would have to be made to programme makers for the rights. "We never stop future-gazing at the BBC and there are always a number of new ideas under discussion", said the spokesman. "Any such ideas would need to be developed in conjunction with the industry and with rights-holders and they would certainly not lead to a two-tier licence fee

4. Back at the BBC R&D blog Joanne Moore has reviewed research into how users feel about sharing their data:

When interviewing Facebook users, although concerned about the visibility of their personal information, it was identified that adjusting privacy settings is a one-time action, rarely revised.

5. BBC iPlayer ended the year with a record breaking set of performance figures. The performance packs are no longer published on this blog but you can find them at the BBC's Media Centre.

You can read interesting links about BBC Online on this blog's delicious account. We also gently guide these links into the Twitterverse on the bbccouk_blogged twitter account.