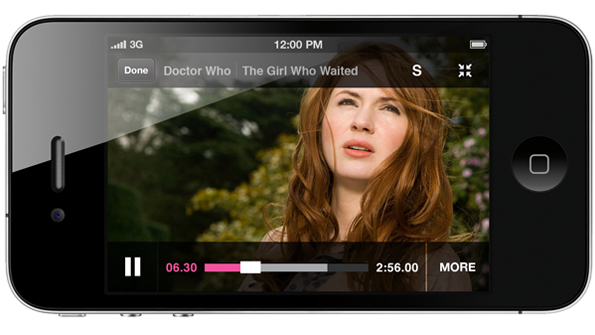 More and more people are choosing to watch their favourite television programmes or listen to the radio on their mobile phone or tablet.

In October 2011 alone 16.5 million programmes were watched on mobile devices and tablets, up by 129% from this time last year.

We want to make it a better and easier experience to catch up on your favourite programmes wherever you are and, today, we’re launching a BBC iPlayer app for the iPhone and iPod touch, and introducing 3G streaming across all mobile networks.

The app is available to download in the Apple App Store now and is compatible with iPod touch or iPhone 3GS and above, running iOS4.3 and above.

The app is compatible with Apple AirPlay. If you are running iOS5, you can connect your iPhone or iPod touch to Apple TV and watch your favourite programme on your television.

You can listen to any of the BBC’s national radio stations in the app. To make this easier, we have enabled background audio so you can do other things on your phone, like check mail or surf the web, while listening to your favourite BBC radio station.

We have worked closely with the network operators to introduce 3G streaming and create a great mobile experience so you can watch your favourite TV programme wherever you are or listen to the radio when you are out and about.

3G streaming is enabled in the iPhone and iPad apps and will shortly be coming to the mobile web version of BBC iPlayer for all supported devices (go to bbc.co.uk/iplayer in your phone’s web browser).

Note that devices older than iPhone 3GS and iPhones and iPod touches that continue to access the mobile web version, will remain a Wi-Fi only service.

We have also done a lot of work to improve the playback experience on portable devices and have rolled out HLS (HTTP Live Streaming) video infrastructure for the apps, which uses adaptive bitrate technologies.

This enables us to detect the strength of your Wi-Fi or 3G connection and serve the appropriate video quality. If you have low internet signal strength then the video stream will adapt down to suit your connection speed; if you move onto a stronger signal then the video stream will automatically improve in quality. The idea is to give you the best possible experience wherever you are.

The BBC iPlayer app for the iPad also receives an update, with iPad users also benefiting from 3G streaming and AirPlay.

This is the first release of the BBC iPlayer app for iPhones and iPod touches and it will, of course, evolve and improve as we refine the interface and add features.

The team would really welcome your comments and feedback on the app. When we Tweet about iPlayer we use a #bbciplayer hashtag so if you would like to use this too that would be great.

I am always keen to know what you think and would love to hear from you.