A New Homepage for BBC Online 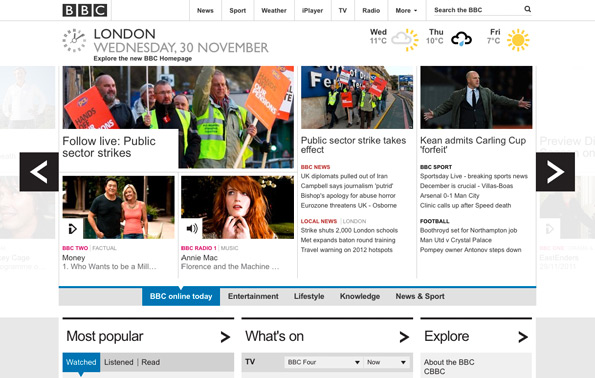 Two months ago the beta version of a new UK homepage for BBC Online was launched, for public use and feedback. My colleague Phil Fearnley published a post at the time to explain the strategic importance of the new homepage and I wrote about the key features in more detail.

Today the homepage that's been running in beta launches in full, and will be the homepage of BBC Online in the UK from now on. For those of you who haven't yet seen it, you can take a look now.

Since the beta launch ten weeks ago we've had three hundred comments on the blogs, over twenty thousand responses to our online survey, and over two and a half thousand direct emails. We have reviewed all your comments, and I'd like to thank those of you who took the time to test the beta and provide feedback. On my previous blog post you can read my responses to some of your comments.

The BBC Homepage occupies a unique position within the BBC Online portfolio as it can showcase the full breadth of the BBC's content.

Audience research told us that users wanted to see the home page do a better job of promoting a greater variety of BBC Online content, to serve a wider range of audience interests.

This isn't easy due to the range of content across BBC Online, but with this redesign we have tried to create a more representative page for the whole service.

But it's important that the homepage continues to meet the needs of the nine million or so users who already visit the page every week, while also extending the page's appeal to the many other licence fee payers who come to BBC Online every month.

Your chosen location has been positioned at the top of the page, alongside the date and time, as a way of indicating the importance of relevant local content. And the weather forecast, always a popular feature, is more prominent as well. Alongside this key information the page also offers a much wider range of the best and most popular content from BBC Online.

Audience research also indicated that the old BBC homepage could be more distinctive: many people who responded confused it with the front page of the BBC News site (bbc.co.uk/news). Many people who only want News or Sport already go straight to the BBC News and BBC Sport homepages, bypassing the BBC Homepage. However, some users get their News and Sport via the BBC homepage.

A significant proportion of traffic is referred to BBC News and BBC Sport from the main BBC homepage - 44% and 35% to each respectively during July of 2011.

So News, Local news and Sport remain clearly signposted and are positioned higher up on the new homepage - getting more headlines 'above the fold'.

The approach we have taken in developing the new homepage is to make it easy to find the content you need every day and, we hope, discover something new from the BBC at the same time.

BBC Director of Future Media Ralph Rivera has talked about his vision of connected storytelling, a sort of 'serendipitous discovery' across the portfolio of BBC Online family of websites.

Results from the beta test site indicate that the majority of BBC websites have received a greater proportion of traffic from the new homepage. The page is performing as intended following the redesign which is the reason we're now launching it for all users.

Some regular users of the BBC Homepage, especially those interested in News and Sport information, were less keen on the Beta Homepage and provided some really useful feedback which we have acted on. We hope that the new Homepage balances their needs with those who want to see the full breadth of BBC content

As well as high- quality news and sport there's award-winning children's content in the recently refreshed CBeebies and CBBC sites, 'Knowledge & Learning' sites such as Your Paintings, Wildlife Finder or Bitesize, and two entertainment services in the shape of BBC iPlayer and an evolving BBC Radio online presence.

Development of the new BBC Homepage doesn't stop here. It introduces a new smart filtering tool (the bar that is labelled BBC online today/entertainment etc) that allows you to see more of the type of content you most want.

In the beta testing some of you told us that you didn't like losing the more detailed customisation that was available in the previous version. My team is working on ways to introduce customisation back into the product for those who want it.

We promised major improvements in our access to content from the nations (based on a user's choice of location) and this will be introduced shortly. In the new year a traffic and travel news module will be launching, again with information based on a user's location preference.

In the meantime, the existing feedback options are still available. You can leave a comment underneath this blog - I read them all - complete the survey, or feedback via email to HomepageBetaFeedback@bbc.co.uk.

Thanks to all of you who engaged with the beta and told us your thoughts - they've been valuable in shaping the launch product.