Partnerships and the Digital Public Space 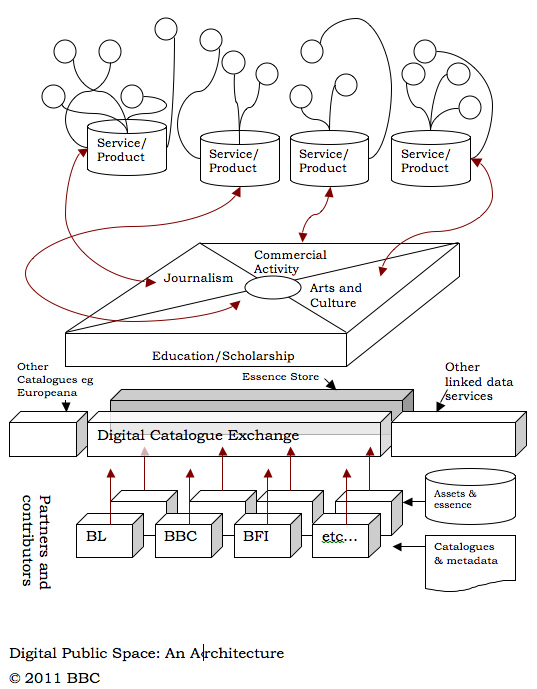 The Digital Public Space isn't a monolithic product like an operating system, or a single-purpose service like GPS. It is large-scale initiative on the part of many different organisations all trying to find the best way to provide the widest possible access to the complete range of digitised material that they create or curate.

The initiative offers the BBC and its partners a way of thinking about how to take material that exists in digital form, from television programmes to scanned texts to 3-D models of objects in museums, and make it available to the wider public in a way that will support the aspirations of many different organisations with many different missions.

Since it concerns digitised data, the technical aspects of the DPS are largely concerned with standards for digitising and storing analogue material like books or videotapes or dealing with 'born digital' assets like documents or video and with making that material searchable by adding appropriate catalogue information, or metadata.

BBC Information and Archives are already world experts in digitising, preserving and indexing television, and we are working with partners including the British Library, the British Museum, the Ulster Museum, Europeana and the BFI to bring in expertise from all different areas, as the DPS is not just about TV.

On top of the storage and indexing mechanism we then need to build search tools and user interfaces that will allow people access both to the data and, where they have permission, the underlying digital material.

In order to explore what this will look like in practice the DPS team at the BBC has developed a prototype data model and website that brings together a small selection of archives and catalogues held by other public bodies in a single catalogue that can describe them all using a consistent set of definitions. These will be described in a post by my colleague Jake Berger later this week.

There is a range of other DPS-shaped projects, all aiming to illuminate different aspects of rich and complex initiative. For example the BBC worked with the British Universities Film and Video Council, the JISC funded Strategic Content Alliance and a number of university partners to launch a project called Chronicle, digitising a selection of television news archive from Northern Ireland during the 1960's and 1970's and using it to explore how it can best be made available for use in further and higher education.

Chronicle makes digitised film and video material available through a set of tools which can be used to search and tag items for research or teaching use, collecting the annotations in a format that allows them to be used internally by the BBC to improve its own cataloguing.

At the moment these partnership projects are modest in ambition and involve relatively few people, but they provide a model for how the digital public space can grow on the basis of a shared approach to the underlying technology and a willingness to explore ways of working that can allow archive material to be made more accessible to more people.