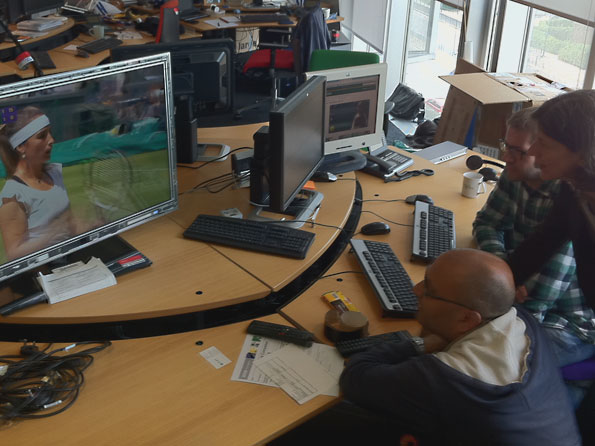 I'm Andy Armstrong, technical architect for Programmes and On Demand here at the BBC. We investigate new technologies for online video and audio delivery looking for ways to enhance existing services, provide new services and streamline the way we handle media content on the internet.

Currently we use multiple approaches to bring video to your computers and other connected devices. The majority of you are using iPlayer in your web browser. That uses RTMP - a protocol developed by Macromedia (now Adobe) specifically for streaming audio and video over the web.

Unfortunately RTMP isn't available on all of the devices we support so we have to use other protocols too - principally HTTP and HTTPS progressive download - the same mechanism that is used for web pages and images.

We're always on the lookout for ways to support a wider range of computers and connected devices. If we can find a way to do that and at the same time serve more of them with a common protocol we will be able to provide a better service and make our infrastructure simpler and more efficient.

One technology that may make that possible is adaptive bit rate HTTP streaming. It works by splitting a video into short chunks (typically between 4 and 10 seconds long). Each chunk is available in a range of bit rates and hence qualities. For each chunk the player decides which bit rate to request based on its estimate of how much bandwidth your internet connection has.

We already use ABR streaming for some sports coverage with a limited range of available bit rates. For the Wimbledon test we will be using Adobe HTTP Dynamic Streaming for the first time and will be supporting bit rates of 416k, 624k, 944k, 1408k, 2112k and 3168k and a maximum resolution of 1280x720 (720p HD).

Until the player has had a chance to assess how much bandwidth it has available it will tend to choose lower bit rates. That means that the first few seconds of the video may be lower quality. Then, if you have enough bandwidth, the player will gradually select higher bit rates until it either detects that it is using as much bandwidth as it can safely sustain or it reaches the highest available quality. To get the highest bit rate the player needs to be displaying full screen video; the embedded version will limit the maximum bit rate to 1408k.

The player maintains a small buffer of downloaded chunks so that it can keep playing without interruption as the available bandwidth varies. At times it may detect that the overall available bandwidth has reduced and switch to a lower bit rate to compensate.

All this should happen smoothly and unobtrusively. Buffering times should be greatly reduced. The fact that the player adapts to the available bandwidth is particularly helpful for live events such as Wimbledon; it allows the player to display the highest possible quality video without lagging too far behind the live action as it struggles to buffer downloaded video.

However - as you might have guessed - if we had all this working properly now we'd be using it for the main web coverage of Wimbledon rather than testing it. This is an extremely promising technology but we don't feel that we know enough about it yet to do that. We know, for example, that the method the player uses to estimate the available bandwidth will need to be adjusted and we need to see how our servers handle this new kind of traffic.

So we certainly can't promise that it will be perfect. In fact we'd be rather surprised if it was. We have been testing it with a small group of BBC staff since February; now we've reached the point at which we need your help to find out how it works for a larger, more representative audience.

For the test we have placed a small icon (see above) in the upper left corner of the video that shows the current bit rate that you are viewing (1 to 5, HD). It will be interesting to hear from you how quickly the player settles to a sustainable quality - that can vary depending on the characteristics of your connection. If you haven't seen it already take a look at the test page.

We are extremely grateful for your help. We expect to run more tests of HTTP streaming over the coming months and it will be particularly valuable for us to have feedback and suggestions from those of you who have been in it from the start.

Andy Armstrong is the Technical Architect for Programmes and On Demand.