Gearing up to deliver Wimbledon 3D

As you've heard by now we are planning to transmit the Wimbledon finals in 3D this year!

It's part of the remit we have to try out and test new technologies where we can and as the main tennis coverage has moved to BBC One HD this year, we have the chance to try something new. For more details of the coverage have a look at Danielle's blog.

The Wimbledon 3D event is a collaboration between the All England Lawn Tennis Club, Sony Professional and the BBC along with many of our partners. After the finals weekend I will do an update with more details of the Outside Broadcast, camera technology and all the bits between SW19, W12 and your screen! I hope to persuade some of my R&D colleagues to write about the other technology we have used and the future of 3D TV.

What are we up to before the big weekend?

The production company working with Sony Professional and BBC Sport are trying to get the best camera positions fitted into Centre Court.

This is a schematic of the 2D and 3D camera positions on Centre Court: 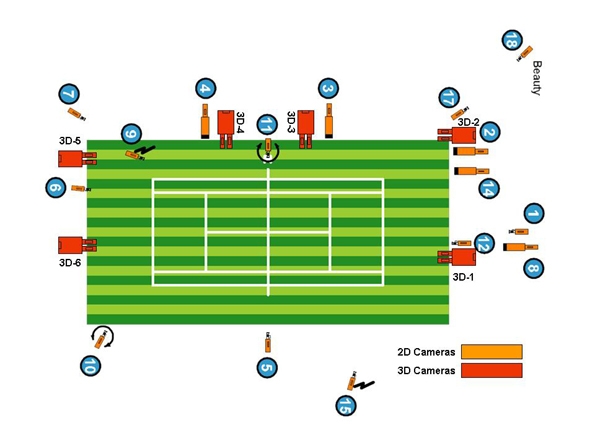 More cameras are used on Centre Court during finals weekend so by the time 5 6 extra 3D camera positions have been added it looks a bit busy! Obviously we try to keep as many cameras out of shot as possible so there may be a few changes to make.

I hope to have some stills so you can see the cameras in situ as well some of the other 3D facilities on site, in time for the next post.

Back in W12, my colleagues in BBC R&D and Distribution who have been working on the satellite encoder's move to S2 and are now working on a further temporary up-date to the BBC HD Channel encoders to get them ready for 3D transmission. When they're happy, all the BBC HD Channel encoders will be updated. As we are transmitting on all platforms (Freeview, Freesat, Sky and Virgin) there's a lot of testing to do!

When the 3D update is complete a modified BBC HD Channel Promo will replace the current version. This has a short 3D clip and a change to the test card to help us check registration.

As we are trying to fit two images into the current BBC HD Channel's signal, one of the temporary changes is change the horizontal resolution from 1440 pixels to 1920 for the trial period.

If all goes to plan, the 3D changes will be made during the morning of 16th 13th June and they will change back to the current settings on 6th July.

What will you see on the BBC HD Channel?

Just like the Sky 3D channel we will transmit a Side by Side (SbyS) image. If you are watching the channel on a 2D TV when a 3D image comes on you will see two squeezed images next to each other. This is the reason we need the1920 horizontal pixels - each image (eye) will be squeezed to 960 pixels wide but will still be 1080 high. 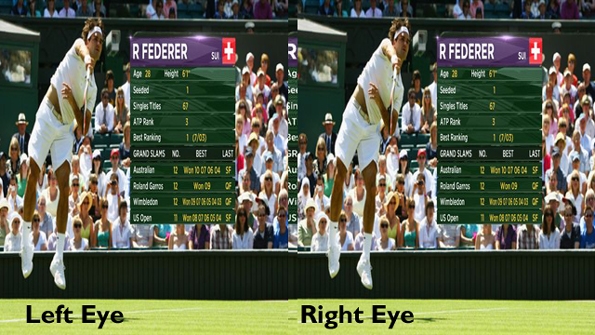 A 3DTV takes the two half-width images and stretches them to fill the screen. How the TV displays them depends on the technology it uses.

The test card will look the same (SbyS) but when displayed on a 3D TV (in 3D mode) the two half width images should line up exactly - there should be no horizontal or vertical shift between left and right eye images. The frequency gratings will give us a good idea of the system filtering and if we are introducing alias components. 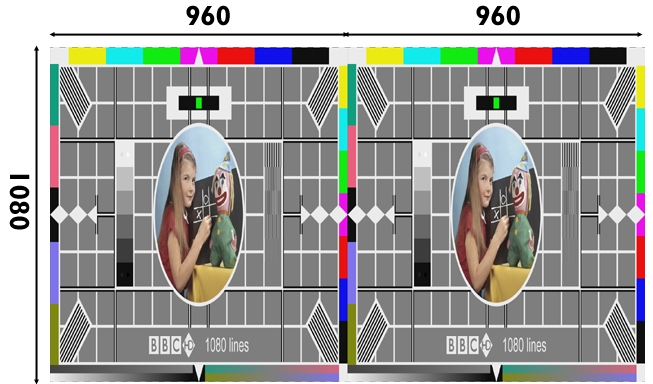 Above: SbyS Test Card as seen on a 2D TV 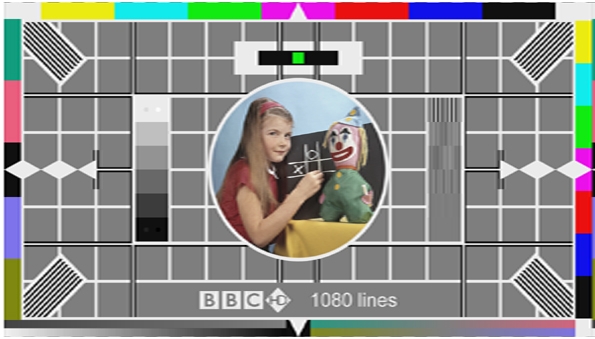 Above: SbyS Test Card as seen on a 3D TV - With or without glasses!

If you want to know more about 3D see my next post.

See also "3D for Wimbledon - the Future of TV" by Danielle Nagler on the About The BBC blog..

N.B. Correction - the date for the encoder change is the 13th June not the 16th. This is corrected in the text above. Apologies for this error. (NR)

N.B. Correction - the previous image of Centre Court cameras was incorrect. The correct one has now been inserted. Apologies. (NR).