When I was lucky enough to get the job of Product Manager for CBBC and CBeebies in June last year, the first thing I did was spend a number of warm summer evenings indoors looking at statistics. What could be the most popular CBBC website? The marvellous wildlife show Deadly 60? The award-winning drama Tracy Beaker? The legendary Blue Peter?

To my amazement, it was none of these: it was the children's news service Newsround. I say amazed as I knew that the site had not been touched for a number of years and was still in an older BBC templating system that was, unlike the rest of CBBC, left aligned and small in size. 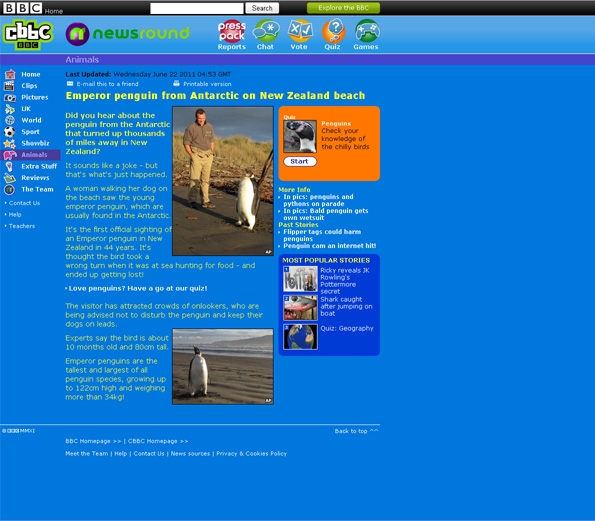 So, I did more research by looking into our search logs - and of all the brands we had, Newsround was the most searched for.

Children were also searching for news stories and people directly - certainly celebrity searches such as 'alicia keys' were in there, but also things in the news that children wanted to understand: in June 2010, there were more searches for 'oil spill', and 'animal testing' than for 'justin bieber'.

Recently Ralph Fiennes (who plays Voldemort in the Harry Potter films) and Nicola Roberts were among our top searches, but 'earthquakes' and 'waves' performed strongly too. Over this period we have also helped children on topics such as 'unicef' 'ice melting', 'refugees', and even 'what to do if you are struck by lightning'.

The headline I took from this - apart from The Kids Are All Right - was that Newsround was performing a huge role in helping children understand the world and that this was highly valued - both for their homework and for their general interest.

So I am delighted to say that the neck muscles of the children of Britain will no longer be cramped by turning to one side: today we are relaunching the Newsround website, and it is now the same width as the rest of the CBBC site and other BBC sites, in another move towards making BBC Online feel like a more cohesive whole. 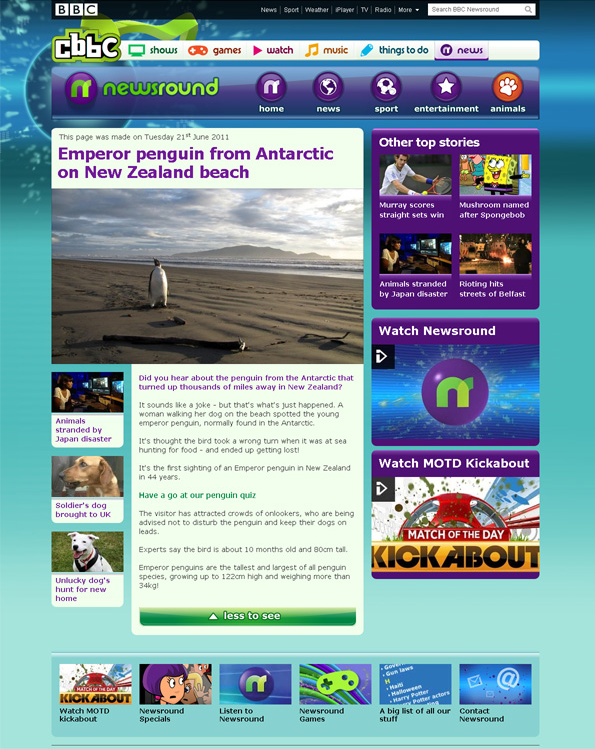 In the relaunch the key has not been to extend the functionality greatly but instead to improve what was already a valued service.

Articles will still come with pictures, but the pictures are bigger, of higher quality. The articles are easier to read and have interactions to engage children as they go down the page.

We have also added some fantastic galleries to show off this photographic content more. Finally we have also cleaned up the architecture greatly: in our user testing it turned out that some news categories meant little to children so we have simplified our indexing to News, Sport, Entertainment, and Animals. My friend and colleague Daniel Clarke talks about the editorial drivers to refreshing Newsround here.

However, we have made a big effort to integrate Newsround more with the rest of the CBBC website. The top navigation now contains a pretty complete picture of what CBBC offers: shows, games, watch [clips and episodes], music, things to do, and news. This I hope gives a good picture of what the CBBC product is: a hub for primary school children whether it is time to play, to laugh, to be creative, or to learn about what is happening in the world.

Earlier this year I blogged about the "(Hopefully) no more tears" approach which we used to release the rest of the website. It has been much harder to step out changes with Newsround: the technology was too old and the designs too different. We have introduced children to parts of this by bringing Newsround more to the fore on the CBBC homepage, and adding News to our top navigation in advance of the relaunch; but my hope is that the site refresh is so obviously an improvement that children will come with us on this.

Now: I come on here, set the blog editor some formatting problems and crack some jokes. The actual work is done by a very talented team who deserve all the credit, and I would like to express my thanks to them. As with the rest of the CBBC site, I hope this is a good example of highly skilled people from editorial, technical, and design backgrounds, working together to create a product that really delivers what our audiences need.