A lot of people have been asking when the BBC News app will be made available on Android devices, which is understandable given the platform's growing popularity.

So, I'm delighted to announce that from today the BBC News app will be available to download from Android Market in the UK. BBC Worldwide will soon be launching an international version of the app for audiences around the world.

At Mobile World Congress this year, BBC Director of Future Media Ralph Rivera reiterated our ongoing commitment to repurpose core, distinctive BBC Online services for a range of mobile devices. The BBC News app was launched on iPhone and iPad in the UK last July and has proved hugely popular, with nearly 3 million UK downloads and a further 3 million internationally to date. Its arrival within Android Market brings immediate access to breaking news and broadcast content to a wider 'on-the-move' audience. 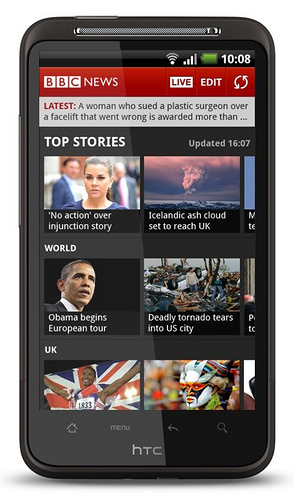 Nowhere is immediacy and accessibility of content more important than with news. We witnessed a 78% increase in users of our mobile browser service on the day news broke of the death of Osama Bin Laden.

An increasing proportion of our audiences now access BBC News via mobile devices. This trend isn't new - licence-fee payers have been able to access BBC News on mobile phones through their browsers for around nine years - but it's increasing. We have responded by delivering BBC News Online to devices via apps to ensure a simple, intuitive user experience, with opportunities for personalisation.

The app achieved around 57,000 downloads in the week commencing 2 May driven by the Osama Bin Laden story - a clear testimony to audiences' appetite for a higher quality, on-the-move experience. And, the app is a trusted bookmark during moments of national and international significance, attracting a record 540,000 UK users around the Bin Laden story, and 376,000 UK users on the day of the Royal Wedding.

Key features of the BBC News app on Android are:

• Simple design with scroll functionality to enable efficient browsing;
• Tap action to reveal full-screen article and in-story video;
• Sideways 'swipe' functionality to move between stories;
• Sharing tools to post stories to a range of social networks, email or send via SMS to a friend;
• Rapid news stories refresh and latest and breaking news 'ticker';
• Neat personalisation features, allowing you to personalise the home screen by adding and removing categories;
• Font controls to increase or decrease the story text size.

The BBC News Android app is available on all Android phones and tablets running software versions 1.6 and above, but we're not yet supporting Honeycomb tablets (Android software version 3.0). The app's video experience is accessible to both Flash and non-Flash enabled devices, over wi-fi and 3G connections. In-story video is supported on Android devices versions 1.6 and above, and live streaming of the BBC News channel is possible on versions 2.2 and above which run Flash.

As the range of devices in the market widens, we plan to offer an optimised BBC News experience to the widest mobile audience possible. With this in mind, we'll be working with manufacturers to look at ways of reversioning the service in the most efficient way. We'll also be working hard on improving the experience across our mobile services.

In the meantime, I'd like to hear your feedback on the BBC News app on Android. We've started to use the #bbcapps hash tag on Twitter this morning so join the conversation there, or post a comment below this blog post now.