There's been a lot of speculation over the last 24 hours about BBC iPlayer apps for mobile, so I wanted to clarify our plans. 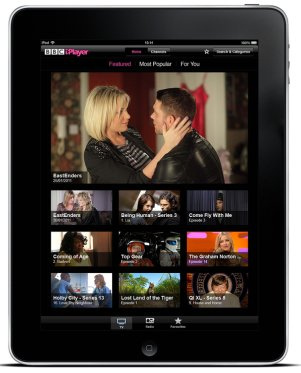 BBC iPlayer app on an iPad

As Erik Huggers announced at Mobile World Congress last year, apps are a big part of our plans to make BBC Online more easily accessible on mobile devices. The BBC News app has been a success for us since launching last year and BBC iPlayer will be next off the production line. These apps are coming at a time when we're really beginning to see massive growth of people using BBC iPlayer on mobile devices. Over Christmas, growth in mobile use of BBC iPlayer outpaced PC growth by more than 2-to-1, and BBC iPlayer growth on tablets outpaced PCs by more than 20-to-1. We're just applying the finishing touches to the apps as we speak, and all things being well we plan to have Android and iPad apps in stores by the end of the week.

Having stuck our toe in the water last year with the iPad (initially, we quickly repurposed our big screen version), this new native app is a significant improvement on the existing experience and it's great to be on the Android platform too. Our intention is to be on as many devices and platforms as possible.

Here are the key features on Android and iPad:

So this is about getting the basics right, simple apps that makes best use of the portable touch-screen experience. We'll be looking to build in more features throughout the year.

For iPad it's straightforward, but for technical reasons we can't bring the app to every single Android device. To download and use the app you'll need a device that uses Android version 2.2 and has Adobe Flash 10.1 Player installed. Our Flash streams need a powerful mobile phone processor and a Wi-Fi connection to ensure a smooth viewing experience, which means that only newer, more powerful Android 2.2 devices connected via Wi-Fi can support the Flash 10.1 streaming experience.

If you have an older version of the Android platform, you may be able to upgrade, so please check with your device manufacturer and/or mobile network provider for information about Android system updates. We'll make an official announcement when the apps are live, but we will be interested in any feedback.

Daniel Danker is the General Manager of Future Media & Technology