As many of you know, if you have both broadband and a Freesat HD set top box, you can connect your box to the Internet with an Ethernet cable. This allows your Freesat box to receive content both via broadcast, and the internet! Recently we upgraded the BBC Red Button Homepage to link to Internet services such as BBC iPlayer on Freesat and we would love to hear what you think of it.

Why was this required?
The Freesat TV and Red Button service is, as the name implies, broadcast to your TV via a satellite. It's broadcast to every Freesat user in the UK simultaneously, which means we can't show video to different people at different times. With the satellite infrastructure, any video we transmit has to be on a continual loop - it's not possible for you to just pick a video to view from the start.

In the current world of Video On Demand and BBC iPlayer, this just won't do. BBC iPlayer for example, is streamed to Freesat IP-enabled devices so you can pick and choose which video to watch, whenever you want it to start playing. We wanted to offer more of these services to Freesat users but first we had to provide a gateway, hence we re-designed the Red Button Homepage.

If your box is connected to the internet and you press red from a BBC channel you'll now be taken to our new Homepage, with links to BBC iPlayer Beta and other recently launched video based services such as the World Cup, Glastonbury and Comedy.

We've changed the Homepage to include an On Now tab, as well as an Index for all our Freesat content. 'On Now' will focus on highlighting our scheduled video based services, or for pointing you in the direction of our most popular permanently available content. We've also included room here for a short description of the service, as opposed to an ambiguous one word title. 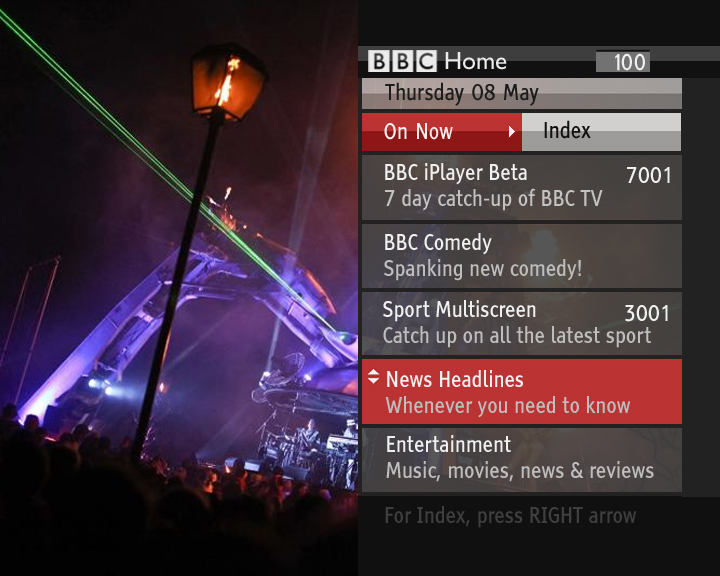 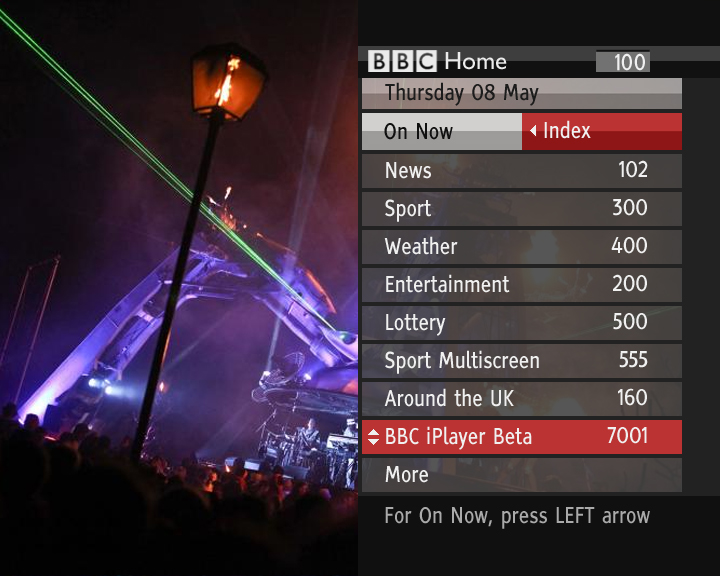 We're also beginning to develop the Connected Homepage for the Freeview HD set top boxes which are able to work with an internet connection. We aim to have this available in early 2011.

Meanwhile we'd love to hear what you think of the new look homepage, so if you have any problems or suggestions for future improvements, please leave a comment below.