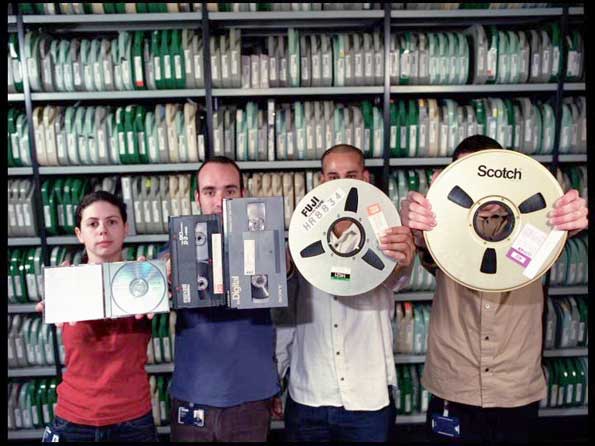 The BBC's legacy Radio and Television programme collections have resided at the Windmill Road Archive in Brentford, West London, for 42 years. There are almost five million items held on a wide variety formats including film, dating back to 1936, videotape, first introduced into the BBC in the late sixties and numerous audio tape and disc including a small collection of wax cylinders which date back to the early 1900s.

Despite the age of some of the components it is very much a working collection with over one million items loaned, to production departments for repeat or re-use within new programmes, every year.

The collection is made up of 650,000 film components, 2.4 million videotapes and 2 million Radio sound items. 75% of the holdings reside in London with the rest deposited around the BBC's Nations and Regions in smaller local collections.

This year will see us begin the re-location from our 42 year old Windmill Road home to a newly built Archive Centre three miles up the road in Perivale. The move will take 7 months to complete but once there our programmes will live in especially tailored storage and environmental conditions designed to prolong the lifespan and integrity of the material. You will be able to read more about Windmill Road and our move to Perivale tomorrow courtesy of a post from my colleague Peter Skinner Head of Archive Operations Information & Archive over on the About the BBC Blog.

Archive activity is not solely around storing, conserving and delivering back to production and play-out, it is also about preserving and digitising for future use and persisted retention. We started a digitisation work programme for the Radio Archive ten years back and have so far migrated (or as we say 'ingested') over 280,000 Radio items to digital media.

The Television programmes presented us with a much tougher nut to crack but with the help of BBC Research & Development we came up with innovative and cost efficient factory processes which have so far digitised 50,000 news items held on Hi Band U-Matic (a news gathering video format used throughout the 1980s) and over 60,000 from the first digital broadcast format used by the BBC, D3. There are over 340,000 tapes in the D3 collection and it was used throughout 1990s up to 2005 as the analogue terrestrial delivery format. It is no longer mechanically supported by the manufacturer so 100,000 tapes were selected for digitisation.

Technology development has to have a bi-directional approach when dealing with legacy archive collections. Looking back at old formats and technologies to inform processes for extracting as much, or more information from the original carriers and looking forwards at ways of future proofing, storing efficiently and releasing back to digital production over the network.

You can hear more about the BBC Archive in this week's Guardian Tech Podcast after their recent visit to Windmill Road.

Finally, we are always interested in your feedback so if you are Tweeting about us please use the #BBCArchive hashtag so we can join in. You can also leave a comment below.