Today the BBC Red Button team is pleased to announce the open source release of the MHEG+ toolkit under the Apache 2.0 licence.

MHEG+ (pronounced: em-heg plus) is both a programming language and a suite of tools developed by the BBC for building interactive television services. If you have ever used the Freeview or Freesat Red Button services such as the interactive news & weather and even the CBeebies games and Formula 1 alternate commentary, you might be surprised to learn that you were using an MHEG+ application.

MHEG+ started its life in 2005 as a BBC Research & Development project aimed at creating a programming language more palatable and modern than its predecessor, MHEG-5. The '+' suffix in the MHEG+ name is meant to suggest it is a superior language to MHEG-5, often referred to as simply "MHEG".

Today MHEG+ is not just a programming language but also a comprehensive suite of tools for developing interactive television applications. The toolkit includes a compiler, debugger, emulator, automated testing tools and also a code editor that integrates with the Eclipse IDE.

The toolkit's emulator, named MHEG Player, emulates both Freeview and Freesat set-top boxes. It features an MHEG graphics engine, a virtual tuner (so users can 'virtually' switch from BBC One to BBC Radio 5 Live, say) and even a virtual remote control that doesn't get lost down the side of the sofa! The integrated debugger too is feature rich and can be used to debug both MHEG-5 and MHEG+ code. 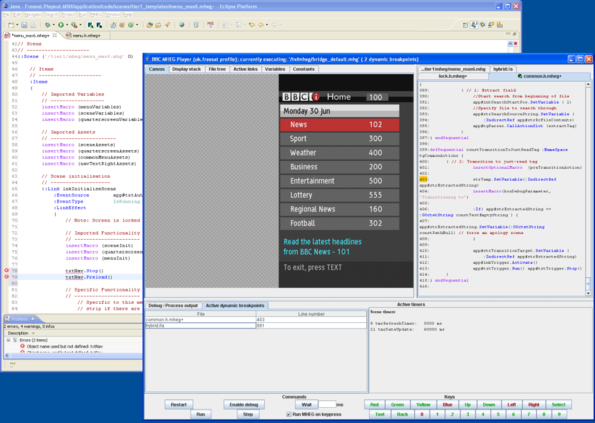 Until today, MHEG+ was only available for use by BBC staff for the benefit of our own interactive television applications. But we think MHEG+ is too useful a tool to keep just to ourselves. Open sourcing MHEG+ is another example of the BBC's drive toward openness and demonstrates our eagerness to give something back to the technical community.

Further, we hope to encourage the community to get involved in MHEG+ and make it better. There are many ways to participate, from simply developing interactive applications (and possibly reporting bugs), to documentation writing and code contributions.

The MHEG+ source code can be browsed and downloaded at the MHEG+ SourceForge project page. Here you can also find a forum for discussing MHEG+ and getting help.

Mark Hatton is a Senior Software Engineer working in the TV Platforms Group.