As many of you know I contacted Paul a while ago to ask if he and a group of his choosing would like to visit me, Danielle and others involved with the BBC HD Channel. The debate about picture quality had met an impasse and we thought this might be a way to move it on and, for me at least, be a way of discussing quality as a whole and not just as a bit rate issue.

It took some time to arrange the meeting, mainly due to the move of all the test equipment from its old home in Surrey to a building in London W12. Have a look at the BBC R&D web site for some of the history of the buildings.

As soon as the new test room (even though it hadn't been re painted) and transmission test chain were ready and running, Paul and I set a date and the group duly arrived.

This is their blog, the content is Paul's and the rest of the group's. Just like the Hitch Hiker's Guide blog, it comes in episodes, this time over three days not five!

I will make comments where appropriate as posts and answer any other question I can in the usual way.

Just to keep you up to date, we had to stop all work as soon as the election was called. We don't allow any changes to hardware or software that's already in place and working in the run up to a major broadcast. We are also making some changes to the audio circuits in the playout chain to cope with the DTT HD service and these have caused a few bumps and mutes on the DTT output and to make sure we keep the sound running properly, I have had the channel locked in 5.1 mode. This means (for those who like to use pro-logic for stereo programmes) your AV systems will stay in surround mode with stereo on the front Left and Right only. We will revert back to switched mode as soon as possible. We obviously need to have the work finished and fully tested in time for the World Cup.

Stop Press (Thursday 3 June): We have just got the go-ahead to install the next software upgrade to the satellite service. This will include the first part of the mix-fade fix and a configuration change that means we will not need to add noise reduction as we have found a better way to handle noisy pictures. We will take the opportunity to change the way the Freeview encoders handle noise and remove the noise reduction we have been trying on the DTT service. The change went in this afternoon in time for the first programme. Unfortunately I couldn't get in touch with Paul in time as I wanted to let him (and the group) know as soon as possible. Other stages of the upgrade will go live as soon as we are sure they will not disrupt the output.

So I can now pass you to Paul and the group's HD Blog...

"Since August 2009, I have experienced noticeably worse picture quality (PQ) from the BBC HD channel. Well, after months of campaigning about this issue on BBC blogs and elsewhere I find myself in the rather strange position of being given my own series of blogs on the BBC Internet blog to write about it. For those who don't know, I made an appeal to the BBC Trust last year about the HD channel's PQ. Following this Andy Quested invited me to gather a small group of other concerned viewers to visit Television Centre for discussions and demos. That visit took place on 30 April 2010 and he has now asked me to put something together for these blogs to let you all know what we found out from the visit.

The first thing I'd like to say is a big thank you to Andy and the rest of the BBC staff for giving us the opportunity to visit them, for being so open with us, and for entering into such enthusiastic debate during our day. I'd also like to thank all those I took with me, and a few others who weren't able to make it on the day, for their help and assistance in preparing for the visit and compiling our thoughts after the event. I'm also grateful to many of you who will have known about this event from these Blogs, and from my own website and correspondence, for your patience while I put these thoughts together.

One of the key tenets in my appeal was that the 40% reduction in bit-rate, made by the BBC on 5 Aug 2009 (from 16 Mbps down to 9.7 Mbps), has had an adverse effect on the channel's PQ. Consequently a large part of the visit was spent with the BBC's Research and Development (R&D) team dealing with this issue. Because it is such a major one I'd like to discuss that aspect in detail in my next blog, which will be published tomorrow. For today, I intend to cover other aspects of the visit. Finally, since I get to write three, the last blog in the series will cover the group's conclusions from the whole visit and also give the BBC some recommendations from us, as discerning viewers, which they may wish to consider when developing their strategy for HD broadcasting.

So, onto Television Centre, and on a bright spring morning I found myself heading for reception with the rest of the group to meet Danielle and Andy and other BBC staff. What follows is a summary prepared by the group of what we did, and what we were told, during the day. 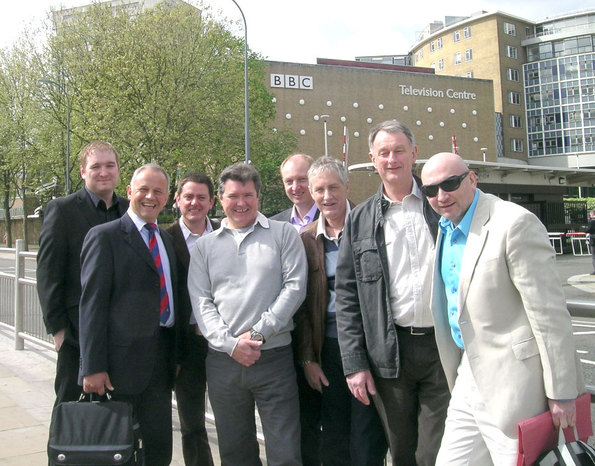 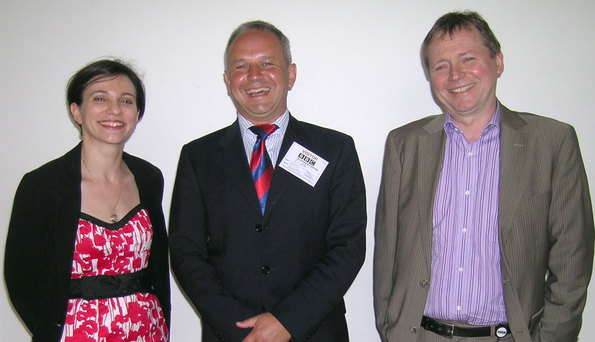 First off, we were all welcomed to the BBC by Danielle Nagler who, as Head of BBC HD, gave us the opportunity to ask some of our more strategic questions regarding the channel. During this time she told us that:

Some examples of production problems she (and Andy) mentioned included:

After our time with Danielle, we were quickly whisked off to BBC R&D - a visit which deserves covering in detail so more of that tomorrow. On our return to TVC, our next destination was:

Lunch was served in the Blue Room, which contains examples of the diverse range of devices on which BBC programming can be received and viewed, ranging from 65" plasma displays to mobile phones, and various set-top boxes and computers.
This was followed by an opportunity to discuss issues surrounding bit-rates, and also the freesat HD and Freeview HD services.
Present were: Andy Quested; Ian Potts; Stephen Baily (Acting Head of Distribution Technology) and Jo Gardiner (Project Manager for Freeview HD -and, previously, for freesat HD) from Distribution. 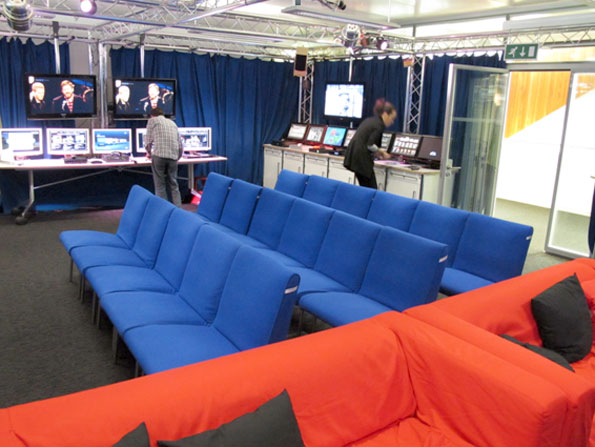 Stephen informed us that: Andy claimed that:

Our time in the Blue Room was interspersed with a tour of the Red Bee playout suite accompanied by Andy Quested and Paul Murphy (Editor of the Internet blog) and given by Huw Hitchin, Playout Editor. Red Bee has a contract with the BBC and other broadcasters to "play out" live or recorded programmes, and the playout suite is where this is all controlled.

Though this was of little relevance to the real subject of the group's meeting with the BBC, as playout has no impact on BBC HD PQ, it was very interesting to see.

Comparison with Other Channels

For the final session of the day we returned to the Blue Room, where Andy Quested showed a series of clips from other HD channels which he believed highlighted similar problems to those the group has raised with regard to BBC HD. Examples included lack of definition, poor colour, or poor source material. These were viewed on a large 65" plasma display.

This was the most controversial aspect of the day for most of the group and, generally, we felt it fell short of achieving the effect that Andy had desired since the problems highlighted were primarily in the source material, not in the transmission. We all knew that other HD channels can suffer from poor source quality too, before being shown it.

Amongst those in the group who have access to subscription HD channels, the general feeling was that those which offer their viewers consistently superior PQ do so principally because of their higher bit-rate and, in some cases, their better source material.

Andy also made the point that some other channels use artificial means to enhance perceived PQ. Overall though, the group again felt such measures would be less significant contributors to perceived PQ than the basics of better source material and higher bit-rate.

At this point in our day we rounded-up and all adjourned to a nearby bar for a drink. This is an appropriate point to end today's blog on our visit to Television Centre. Tomorrow's will be about the visit to R&D, the PQ tests and what we learned from the highly qualified, skilled, personable and enthusiastic team of people we met there."