BBC iPlayer on the iPad 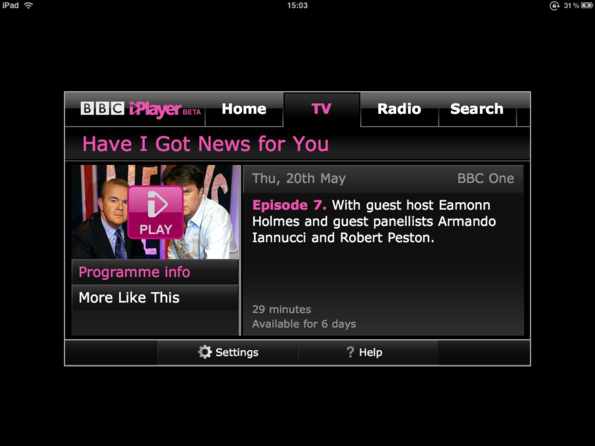 So, it's finally here. The iPad. And one of the frequent questions over the last few weeks has been if and when the BBC iPlayer will arrive on it. Most of you will be aware of the recent discussions around Flash not being available on the iPad and whether html5 be the answer.

This has led in turn to questions about whether we're going to support Adobe or Apple. But we don't back any one technical horse. We care about making our services available as widely as possible: for our audiences.

In the past we have optimised iPlayer to work on a range of devices, and the iPad (exciting as it is) is just another device we are adding to the ever growing iPlayer device portfolio.

The iPlayer site you are seeing on the iPad is what we call the iPlayer Bigscreen site where a small team build browser based applications to deliver content. The same iPlayer destination being used for iPad also works for PS3, Sony BluDisc players, Cello TVs, and in the near future, multiple other browser based CE devices.

So, back to the iPad.  How did it all come together?

Well, when the FM&T division looked at the functionality of the iPad we saw that there were two key aspects that we needed to consider: suitability of the app to touch screen and (critically) high quality video delivery.  In this particular case, the Bigscreen site was decided as the best solution. It had already been in use for quite some time, so as a core solution it was easy to see that it was a good starting point.

Just four short weeks ago, the project kicked off with the Bigscreen team.

Knowing where we wanted to be by the time iPad was to be released in the UK, the main challenges Bigscreen faced were not only how to overcome the technical difficulties (e.g. optimising a site built for pointer or remote control driven navigation to iPad, utilising gestures and touch style navigation) but also how to deliver it very, very quickly with a team that contained just 2 developers.

So, we concentrated immediately on creating a continuous rapid delivery process which could turnaround the most business value in the shortest period of time.  Drawing from the Agile Manifesto, Lean concepts and a Kanban inspired framework, we developed a variation of a daily board which tracked dependencies, tasks and features in real time.  Instead of a daily standup, we had four very short status updates per day where rapid prioritisation and block removal was agreed and actioned according to the aims of delivery for that day, which then was tied directly into the aims for each week and realistically connected the team to the overall goal.

Luckily, this gave us rapid, real time agility that allowed us to quickly produce results and feedback continuously, working around and within limited technologies - discovering quickly what worked and what didn't and guiding us to realistic, useful solutions.

Within this process framework, the technical implementation initially progressed well. For example, the iPad gestures came together quite easily; however the playback solution was much more complicated and required changes in several backend systems.

We decided that the best route to implement our video and audio player was playback using the html5 video tag. This allows us to integrate the native player into our site, where we serve two H.264 flavours, one 1500kbps for the high quality video (default), and a lower 800kbps you can use if you are bandwidth constrained.

In any case, the result is the Beta version you can see right now - we really hope you like it - delivered by a small team of 5 within just 4 weeks and with the generous support of our FM&T colleagues despite being already busy with the UK election, iPlayer V3, and now the World Cup.

And don't forget, soon we will embark on incorporating the iPlayer V3 features for Bigscreen.

But that is chapter two.