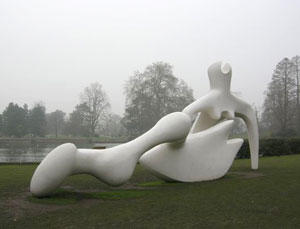 Last week's announcement in Barcelona that the Beeb are going to be producing mobile apps was greeted in equal measure as both a good thing (by smart phone owners) and a bad thing (by newspaper barons). In case you missed it there's a demo of what a BBC news iPhone app might look like on the Internet blog.

Art lovers can find a wealth of cultural goodies about the great British sculptor Henry Moore on BBC Archive including 5live's Richard Bacon, then of Blue Peter, helping to move a Moore sculpture.

Over at BBC News Have your Say has migrated over to BBC iD, the sign in system used across blogs on the BBC. Alex Gubbay, BBC News's social media editor, writes that:

"the switchover will address the most frequent complaint we get about Have Your Say: that comments take too long to appear."

The Register reports on unhappy developers who have been made unhappy by recent changes to iPlayer:

The BBC has quietly updated its hugely popular iPlayer with a verification layer that closes the door on open source implementations of RTMP (real-time messaging protocol) streaming...

So what does this mean?

The tweak means that free RTMP plugins offered by the likes of the XBMC community - whose code is based on the GNU General Public Licence v2 - can no longer stream iPlayer content. The latest iteration of XBMC's plugin was created in May last year and was being used by UK viewers to play TV and radio catch-up content from the BBC's iPlayer service.

Now, it seems, the BBC has once again picked a fight with openistas by closing the door on freely developed RTMP plugins for the iPlayer, and in so doing has forced users to download Flash if they wish to view and listen to the Beeb's telly and radio shows.


Read the full story at The Register and have a look at the xbmc iPlayer thread on the iPlayer messageboard.
*

The BBC R&D website has been revamped which should make finding things like White Paper 173 The Challenges of Three-Dimensional Television much easier. You can find out more about this on the R&D blog.

As we were discussing the changing nature of the hub - it is increasingly looking to engage with users beyond the core BBC audience - it became apparent that there is a paradox at the heart of what the BBC does here - and by extension, any UGC effort. And it's a paradox around objectivity and neutrality.

There's video and audio of the visit linked to from Paul's post.

Paul Murphy is the Editor of the Internet blog. The picture is of a Henry Moore sculpture.