Case study: Use of Semantic Web Technologies on the BBC Web Sites 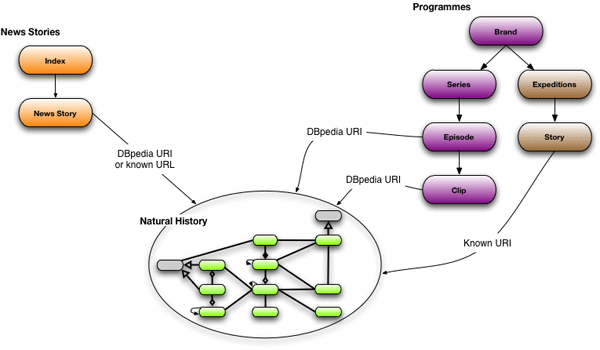 The BBC has long been an advocate of Linked Data, an approach to using the Web to connect related data, or as Wikipedia puts it "a term used to describe a recommended best practice for exposing, sharing, and connecting pieces of data, information, and knowledge on the Semantic Web using URIs and RDF."

Anyway W3C has just published a Case Study: Use of Semantic Web Technologies on the BBC Web Sites.

Or the subsequent work to make BBC Music available as linked data, quite a lot has been written. Both Matthew Shorter and I blogged about it at it's launch (The all new BBC music site where programmes meet music and the semantic web and BBC Music Artist Pages Beta) and ReadWriteWeb recently featured it here.

Patrick Sinclair's also gave a great presentation of our work to date at last years 1st W3C Brazil Web Conference and I spoke at the 20th anniversary of the Web celebrations at CERN on making computers human literate.

Finally if you would like to develop your own site along similar principles a good place to start is Michael Smethurst post 'how we make websites' which details the process we've used to deliver bbc.co.uk/programmes, bbc.co.uk/music and bbc.co.uk/wildlifefinder.

Caption: "By using DBpedia as a controlled vocabulary we are able to tag our programmes (or clips from them) and news stories with DBpedia URIs so that we can mesh-up content across the BBC to create new journeys across bbc.co.uk," writes Tom Scott.