As Director of Future Media and Technology, I'm responsible for future-proofing the BBC in many respects - delivering technologies to serve the public in a fragmented digital age and keeping our output online and on air.

Today I gave a keynote address at Mobile World Congress in Barcelona. This event brings together the mobile industry, and I shared our plans to make BBC Online even more accessible on mobiles, and what the industry can do collectively to further open up the huge potential of mobile for the benefit of the audience. I've given an outline of my presentation below, and would be keen to hear any feedback.

The BBC's R&D division has been at the heart of the global broadcast engineering industry for more than sixty years. From the Home Service, one service on one platform, to the multiple services on multiple platforms we run today, we've both innovated in technology to enable us to deliver public services free at the point of use, and innovated in content creation accordingly.

Evolution takes time. Early TV programmes were essentially visual recordings of radio programmes, but programme makers grew to understand the medium and TV took its rightful place alongside radio as a second platform.

We are at a similar turning point in the internet age. We still, in the most part, define our digital agenda through the lens of broadcast output, and rightly so. But times are changing, and the internet is taking its place alongside TV and radio as a third platform in its own right. 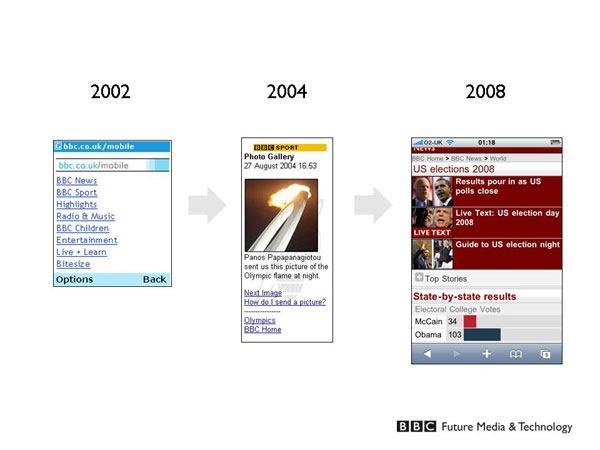 BBC Online has evolved throughout its 12 year history. The service licence allows us offer mobile access to BBC Online, bringing increased public value to audiences. Ten years ago, we launched BBC Online's first WAP site. Later, we added graphics and after that audio/ video. This has helped BBC Online to establish itself as the second most-visited mobile website in the UK. 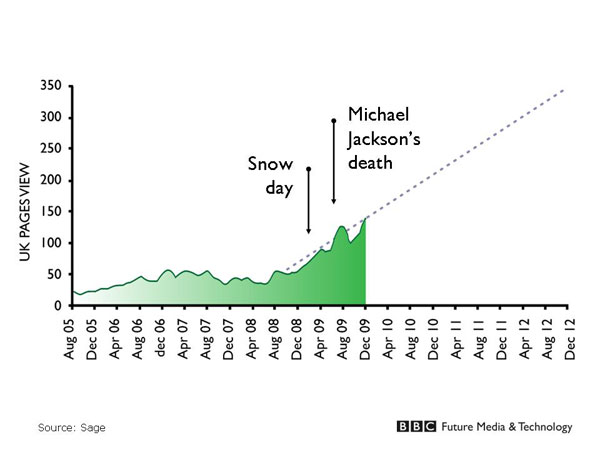 Usage grew fast in mid-2008, as this graph shows - driven by the uptake in smartphones, and developments to user-experience. We expect growth to continue.

Major events create usage spikes. The UK's heavy snowfall in early 2009 and the shock death of Michael Jackson promoted spikes in traffic across all our digital platforms - but particularly mobile. With 2.5 million users on the day of Michael Jackson's death, this was more than twice the previous record level of traffic. Traffic peaks too on Saturday afternoons, as people looking up sports results - particularly football.

Of course, it's the immediacy and accessibility of mobile that delivers real value to our audience. 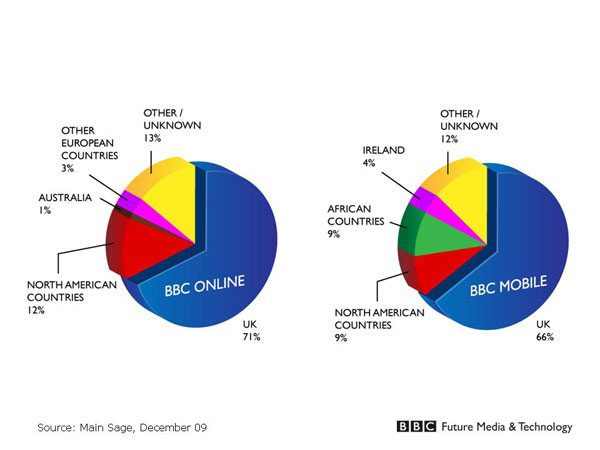 The geographical distribution is interesting too. Usage, by location for BBC Online on the web (on the left), and BBC Online on the mobile (on the right) differs most strongly because of the popularity of our services in Africa, with Nigeria accounting for 5% of all usage. African countries often have higher internet access via mobile than on fixed lines.

With more languages than any other service, BBC World Service has made good use of mobile.

This slide shows a BBC World Service project in Northern Nigeria. Six villages were given mobile phones, to access our Hausa service. The man in the middle is the village's "mobile keeper" - giving them a window on the world and the ability to report on community life. 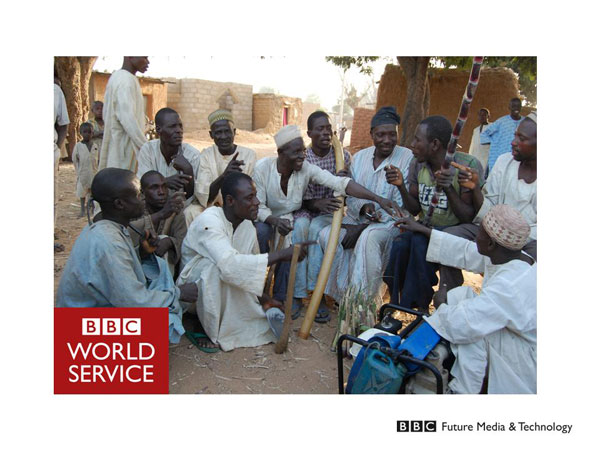 I find this mix of social, interactive and location-based services incredibly compelling - and a strong sign of how content you'd receive on your computer - or the TV for that matter - can be reversioned for mobiles and add real value to people's lives in the process.

So back to the UK, who accesses our services over mobiles? Long term, mobile could become the primary point of internet access for the majority. The potential is stronger for the younger digital natives of today who become the licence payers of tomorrow.

But today's mobile audience primarily falls into four groups. "Mobile first" - people who use mobile as their primary access point to the internet. "Mobile lifestyle" - those who love the convenience of mobile services when they're on the move. "Addicted devotees" - the gadget lovers on their phones all the time, even in the internet connected home, and "social animals" - people particularly driven by social networking.

It's with these people in mind we focus on today's mobile propositions. 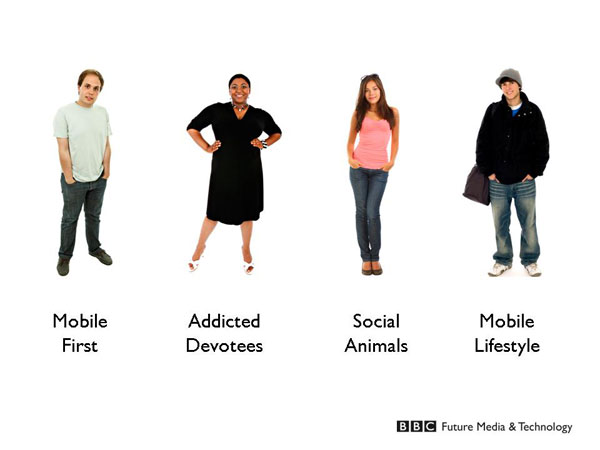 This year, we intend to move mobile forward by repurposing our core, distinctive BBC Online services for a range of mobiles and smartphones over coming months.

BBC News and BBC Sport applications are already planned, starting with BBC News on the iPhone in April. 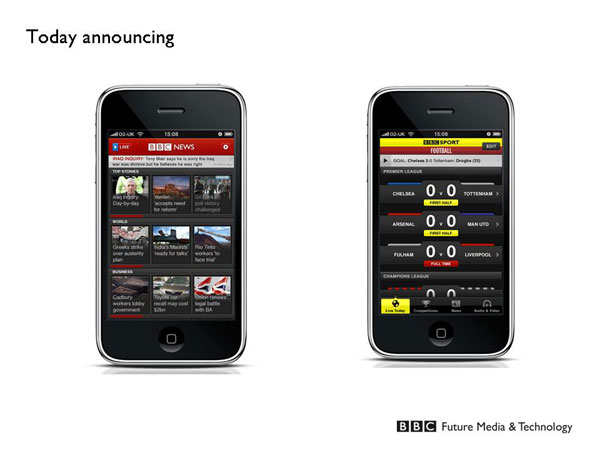 The BBC Sport application will follow shortly after, in time for the 2010 World Cup, again across a wide range of platforms and devices. (Ed's note: Read about the Sport app on the 5live blog (PM))

I gave a short demonstration of how we expect the News and Sport applications to work - each is designed specifically to focus on what the audience most wants from the mobile device, taking the BBC's audio-visual content to audiences on the move.

My colleagues Pete Clifton in BBC News and David Madden from the BBC Mobile team go into more details on the product features on the News Editors blog and BBC Internet blog. There's also a flash demo of the BBC News application within David's blog.

These applications of course will complement our existing presence on web-based platforms. The news and sport applications will initially be made on iPhone and will follow on Blackberry and Android platforms and a range of other devices later in the year: of course the BBC will work with all companies in this market. 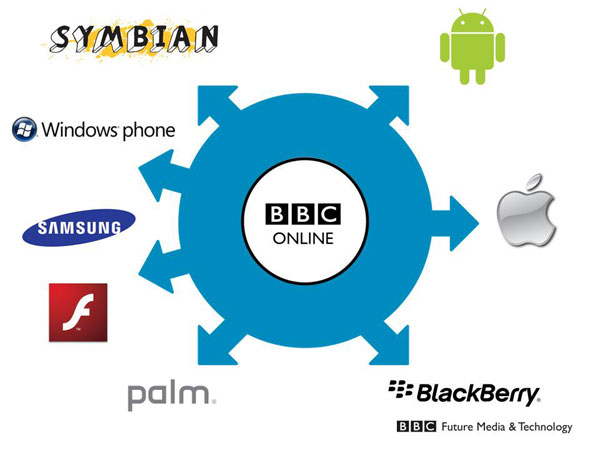 But of course, mobile is one part of a bigger picture. With a service like BBC Online, we can deliver rich, interactive content to the web, to mobile and to TVs - with a user-experience tailored to the platform that carries it to the device.

For mobile, read location-based, simple and personalised user experiences. The web, a rich experience that navigates through the breadth of content. And TV, augmenting a passive experience with the power of on-demand services. 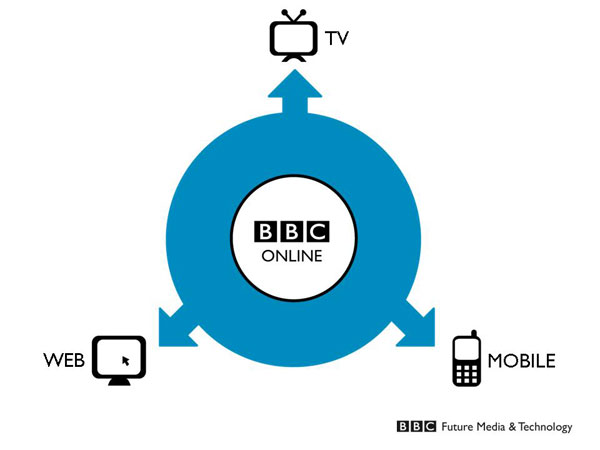 By adding social functionality and the seamless integration of your BBC experience across all your devices, we start to imagine what BBC Online can be. But that's the future.

So how do we get there? We have a real opportunity to improve what we offer younger audiences in particular, those traditionally underserved by the BBC but often use mobile devices to access the internet. Today's audiences expect us to go to them, not come to us.

For us, the 2012 Olympics in London will be the most connected, most digital event we've ever been involved in - and the potential is huge. But the industry needs to change if we are to deliver on this potential. 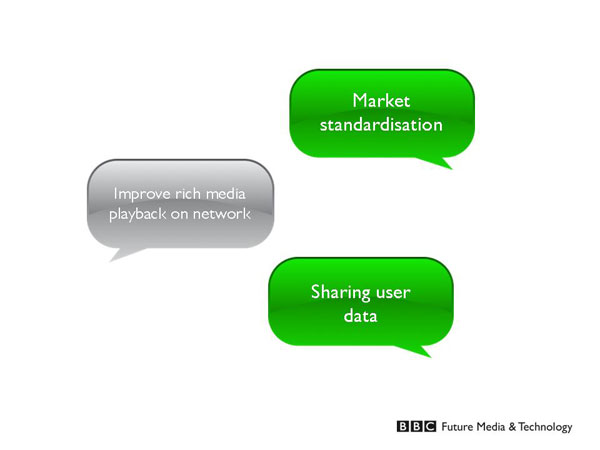 First, we exist in a fragmented market, that's not easy for content providers and developers to operate in and we must embrace common standardisation of platforms, handset features, and performance.

Second, increased usage and higher quality content puts increased pressure on the networks we rely on for delivery to audiences.. Compression solutions won't be enough and investment in mobile networks will continue to be necessary.

I was very pleased to hear news at the start of the week that two of these issues are beginning to be addressed. The announcement that 24 of the world's largest mobile operators have joined forces to launch an open international applications platform is a great move toward standardisation. In addition AT&T CTO John Donovan's interview with Mobile World Congress Daily suggests that they are taking steps to upgrade their networks to reduce congestion and ease data traffic which is also an excellent step forward.

And finally, network operators and content providers need to overcome location problems. If a network reports a UK customer as being in Canada or Germany, because that's where the traffic is routed, we can't the deliver that content to the consumer - no good for either of us.

I don't pretend these problems are easy to fix, or look to any one sector of this industry to solve them. But I do believe the opportunity is there, and by working in partnership we can go a long way toward unlocking mobile's vast potential - and I hope that this is the first step on this journey.