Erik Huggers at C21: "This is not the BBC entering into Social Networks." 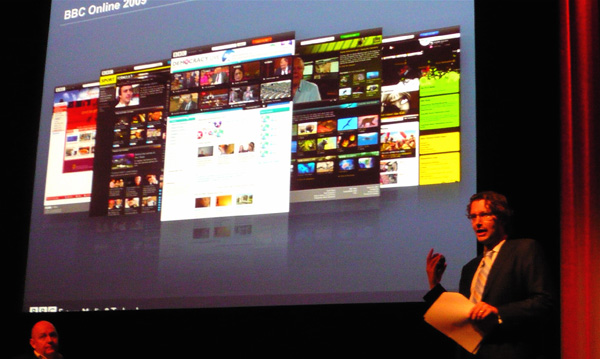 I'm in the cinema at BAFTA's London venue at the C21 Future Media conference waiting for the keynote speech from BBC online boss Erik Huggers. (Pictured above: On the right Erik Huggers, BBC and on the left David Jenkinson, C21 MD)

Erik's keynote is titled "Future Media the next wave of innovation" and (so the programme says) addresses questions like "What is the future of digital entertainment at the BBC? From the challenge of Canvas to the Corporation's role in Digital Britain..."

The moderator David Jenkinson announces we're going to start late due to delays on the tube. What ever happened to video conferencing, working from home and while we're at it where's my jet pack?

BTW, the conference organisers are filming today and will be making them available "over the coming weeks". When they do we'll link to them. In the meantime you'll have to do with my notes.

Erik gets on the platform. He has a slide presentation and some notes. (NB: Quotes are as accurate as my typing allows. I'll update the post and add additional links and some photos later today.)

Slide: Some background to the last year and great promise for 2010.
Erik's key things currently:
Social media: Facebook no. 3 most visited UK website
Microblogging: Twitter 3000% growth;
Social gaming:
On demand media: no longer a growing thing but has reached critical mass - not just iPlayer also C4, ITV, Sky, Hulu, Blinkbox. In that on demand space it's getting confusing for consumers: plus we have Arqiva and Google entering marketing on demand market. On demand is everywhere on all platforms.

Mobile is the next big thing as Mary Meeker said at Web 2.0. iPhone "as game changer" with over 1m handsets in consumer hands.

"It's all going to be about the battle for the attention of the consumer. Web 2.0 has lowered the barriers to entry."

Amazon webservices and a credit card is all you need for a start up.

"We willl continue to push forward on multi-platform for iPlayer"

Consumers love to watch telly in their living room. Points to a bright future for Canvas and other IPTV plays that want to get into the living-room. PS3 community almost as big as Mac.

Erik tells an anecdote about PC and Mac users: how different are they? PC users favour EastEnders and the soaps and Mac users like the comedy. Admittedly Mac sample is a smaller group.

Slide: iPlayer - The Next Wave Blurry pic on Flickr

iPlayer v3. Based on feedback from users:

iPlayer already on Wii. Has been clumsy. Soon we'll be launching a dedicated Nintendo Wii application, built by the team here (London) in partnership with the Manchester team. Wii has 6m boxes in this country so making iPlayer available will help users enjoy BBC programmes. Pic on Flickr

Slide: Search +
Allowing users to find more BBC content more easily. A new service called Search +. A one stop shop on things you might be interested in. "It'll pull together all info across news, audio, video, knowledge around a topic or personality in one place.

Slide: Social Discovery Pic on Flickr
Not about social networking. About using the fact that your friends are likely to use BBC services to read, watch, listen to stuff - the lens is through your friends. "We believe people discover great things through their friends."

Slide: Canvas
Working w. industry driving standards through DTG. "We believe Canvas will be a game changer. It still needs approval by BBC Trust. If it gets it what will it mean? Democratise access to the living-room. Much more than TV and access to the internet - about allowing developers to build apps to reach users. The beauty is that it's all based on internet technology standards."

Erik: 2012 will have 5000+ hours of video. Not enough hours to broadcast on linear, web is where it'll all be made available.

(Demo: Message from friends alerting to stuff that's going on)

Erik calls for industry to work together w. DTG once Trust approves to drive this forward.

Final slide: Next Wave
Partnership is key in fragmented market. "We have to work together". British companies and consumers will get clobbered with foreign stuff if we don't.
Innovation: value for money - iPlayer on new platforms gives access to licence fee payers.
Next wave dependent on next wave of talent. We need to step up on education and skill sets. We're having a hard time finding talented engineers and we need a skilled set of developers, project managers, etc - in danger of missing out on promise of Digital Britain.

There was a short Q&A
(Missed question)
Erik: Because CC said no to Kangaroo, Trust said no to Open iPlayer many British companies have no choice but to partner with foreign companies.

Question: What will happen if Canvas doesn't go ahead?
Erik: Internet will come to TV whatever happens. If Canvas doesn't happen it'll be a fragmented market. For start ups there'll be the additional costs of reformatting for each different platform versus an open standard.

Question from man from Digital rights group: Bandwidth needed for services like Canvas in demo?
Erik: Requirements minimal, app small, audio and video large but not dissimilar to what we do now on services like iPlayer. There will be a crunch point in the future when the UK must step up to sort out network. South Korea story has 100mb planning upgrade. We have 2mb in this country set too low. Why should we invest? Dutch harbour story at start of century: Rotterdam. Same story for network - if we build it people will build stuff for it.