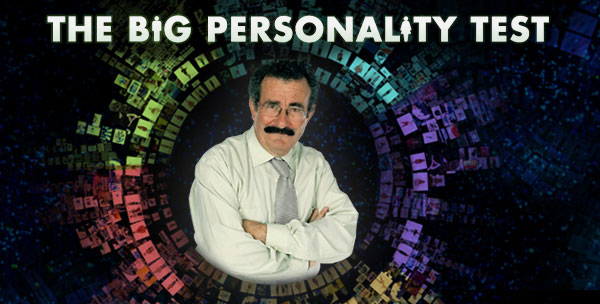 The Big Personality Test, launched on Mon 23 November, is the second major experiment from the BBC's Lab UK website. I'm pleased to say that we didn't get it wrong when we called it Big. More than 100,000 people completed the test in the first two days and the deluge shows no sign of abating.

The Big Personality Test is the second in a trilogy of experiments being delivered by the Lab UK team between September 2009 and February 2010. The first was Brain Test Britain, a full-scale clinical trial that will hopefully tell us whether or not brain training actually works. This is still underway. The third experiment is still being defined, but will be looking at what the internet is doing to our brains.

Despite the development of Lab UK taking place at a truly break-neck speed over the last eight months, we've had to make very few adjustments to our ambitions for the project. And as the Big Personality Test has shown, even where we've not yet delivered the full package to the users, the users are showing a great willingness to fill in the blanks.

For example, we've yet to formally 'socialise' Lab UK with the likes of Facebook, Twitter et al, but this hasn't been a barrier to users who have been furiously tweeting their Big Five personality traits ("Just took the BBC Big Personality Test and scored high on neuroticism! I wonder if this is common across wedding planners...?!") and screengrabbing their results graphs for blogs and profiles.

Needless to say, we have plans to actively facilitate the viral spread of future Lab UK experiments through social networks, as well as delivering experiments for under 18s and looking at some interesting data visualisation ideas for user feedback and experiment results. Then there's the rack of exciting experiment ideas we're developing for 2010 onwards, looking at everything from risky business to the science of sound.

Lab UK started out with two big ideas about how to engage the public in mass-participation experiments online. First, we wanted to use science to tell people something meaningful about themselves. Second, we wanted to tap into a more altruistic motive, by asking people to contribute to the greater good by participating in groundbreaking experiments. As any scientist will tell you, nothing is ever proved beyond all doubt, but the initial results are very encouraging.

Richard Cable is part of the BBC Lab UK team.