People watch natural history programmes for different reasons - sometimes it's for educational reasons, sometimes to be amazed by the beauty of the natural world, sometimes it's as simple as a love of animals and wildlife in general.

The BBC is, and has been for a very long time, at the forefront of wildlife film making from early programmes such as Zoo quest through to blue chip programmes like Life and Radio 4's Life Stories with David Attenborough. However, despite this wealth of content access to it has been limited to broadcasts.

Over the last few months we've been digitising and segmenting the best of the BBC's natural history archive and putting it online. You can now watch clips from Planet Earth, Wild Africa, Land of the Tiger, Realms of the Russian Bear, Lost Land of the Volcano and many more.

These clips are, I believe, wonderful in their own right - if you want to watch the best bits of your favourite programme you can. But we wanted to go further, to help people discover new programmes from the archive and to gain a better understanding of the natural world; and to do this we built Wildlife Finder. 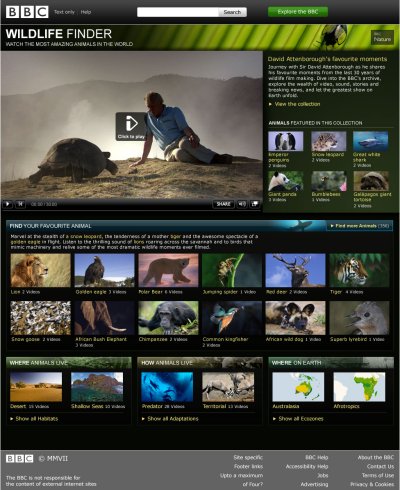 Wildlife Finder uses programme clips, combines them with other sources of information from around the web and within the BBC to let you find out more about the world's wildlife, its animals, their behaviours and adaptations, and habitats. It does this by providing a page - a URI - for every species, habitat and adaptation the BBC has content on (OK not every species quite yet but we're working on it) and aggregating the information around that link.

We've then provided lots of horizontal navigation around those concepts so that you can, for example, browse from information about an animal directly to another page about its habitat, and from there to a programme or news story. My aim is to provide the 'semantic aspic' for natural history content within the BBC - providing journeys between our programmes, news stories and expeditions and in doing so hopefully help people gain a greater understanding of the world around them.

In addition to opening up the BBC's natural history archive we have also launched a dedicated wildlife news service Earth News and a new site Earth Explorers which provides a more personal insight from crews on location. But none of this means that the BBC has everything covered. For example, we don't have information on the conservation status of a species, nor its distribution - indeed there is lots we don't know, but thankfully there are lots of other really great resources elsewhere on the web.

When we publish new content we seek to provide distinctive content - whether that's an Earth News articles or Earth Explorers stories or whether it's information on a species in Wildlife Finder.

But adding new content doesn't mean that we should necessarily add it directly to bbc.co.uk. As I've mentioned we are using Wikipedia to provide background information, but sometime we find errors, sometimes the information isn't good enough and sometimes it's missing (I should point out the these are exceptions - generally the quality is very good).

Rather than fixing this locally within a BBC CMS we instead fix the problem on Wikipedia - creating new pages where needed, or editing those that aren't up to standard. Doing this means that the BBC's website gets better because we transclude the Wikipedia content on our pages, but so does Wikipedia and the wider Web because the content within Wikipedia is licensed under permissive terms so anyone can reuse it.

What next? Well we have a lot of ideas on how to improve the service, we make fortnightly functional updates so hopefully you will see things evolve and improve over time, but there's one thing I did want to touch on which might not be immediately obvious.

In the same way that we are making use of other people's data so we want to make our data available for other to mesh-up. Right now we're only publishing one representation - HTML - but we've designed everything following the Linked Data principles (it's just a really good way of building large, coherent websites) - so for example every resource, not just every page is addressable. For example, here's the URI for the sounds a Common Chimpanzee makes, or the news stories about Giant Pandas.

We will be providing RDF/XML and JSON representation for these URIs in addition to the HTML - the web site thus becomes the API. This means that not only can we link content across bbc.co.uk but others can more easily mesh-up content across the Web. To make that a little bit easier we've reused the Wikipedia URL slugs - the bit at the end of the URL - or as Michael puts it reusing web-scale identifiers.