(This blog post is about a web-based version of BBC iPlayer launched in 2009. You may also be interested in the BBC iPlayer application for PS3, designed for the remote control in the living room, that was launched August 8th 2011 - inserted Ian McDonald 12 Aug 2011)

We first released a version of iPlayer for PS3 about a year ago. It worked pretty well, but back then the PS3 used an older version of Flash that didn't support H.264 playback and didn't support full-screen mode, which somewhat limited the playback experience we could provide.

A few months ago Sony released an updated version of Flash that provided support for H.264 content. However, that version of Flash was still unable to play back our higher quality streams at the full frame rate of 25fps.

Since then, Sony have done a great job of enhancing the PS3's Flash playback experience, and the latest V3.0 firmware update now includes hardware acceleration in full-screen mode, allowing for a substantial improvement in the playback experience.

Over the past year, we've also done a lot of tuning and enhancements to our iPlayer video encoding, including adding a new 1500Kbps "SD quality" format. Put the two together and the result is an iPlayer on PS3 with brilliant video quality - almost as good as broadcast television!

As part of the V3.0 firmware update, Sony have added a big iPlayer icon to the PS3's cross-media bar, giving easy one-click access to iPlayer:

As well as optimising the video quality, we've also optimised our "designed for TV viewing" BigScreen interface in a new larger size to take advantage of the extra real estate offered on high-def displays: 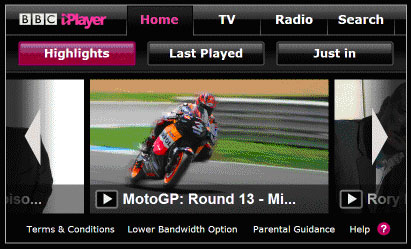 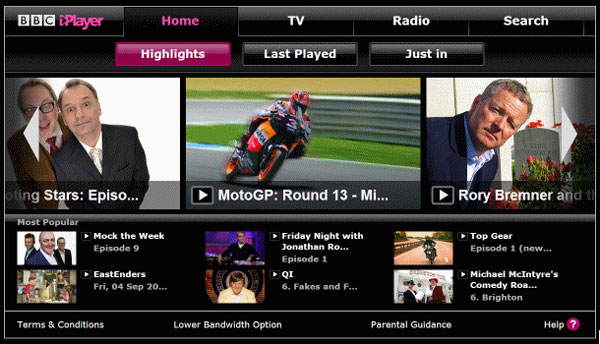 By the way, you can experience our BigScreen version of iPlayer on your PC as well - just head over to https://www.bbc.co.uk/iplayer/bigscreen on any computer. Connect your computer's video out to your TV set and use our BigScreen interface to play your favourite programmes on demand from the comfort of your couch.

Finally, some iPlayer on PS3 tips and tricks:

Over the coming weeks we'll be adding some extra functionality and fixing a few glitches in the UI.

User response to our new iPlayer for PS3 has been amazing. Although it's less than a week since we launched, iPlayer on PS3 now accounts for a massive ~10% of all iPlayer viewing, overtaking Mac (8.5%) to be our 2nd most popular platform for IP-delivered content. We'll have to wait and see whether this holds up in the coming weeks, but this enthusiastic reception makes it clear that users do want iPlayer on their TV - something that bodes well for Canvas and other IPTV propositions.