One of my favourite quotes from some focus groups that we did with blind and visually impaired people last year was:

"audio description is great... they are saying they are working on putting it on iPlayer, but I don't really believe them".

This, to me, summed up the frustration of a lot of our visually-impaired BBC iPlayer users - if iPlayer has subtitles and signed content, why doesn't it have audio description?

We've always been committed to high standards of accessibility across all of our sites and services, especially those new services like iPlayer which strive to deliver the benefits of emerging technologies to all our audiences. But it always helps to hear from our audiences exactly what they expect from us. 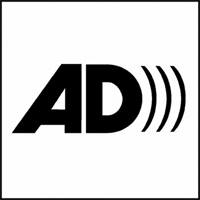 So I'm delighted to say that we have now given visually-impaired people what they've been asking for - approximately 25 hours per week of the BBC's audio described programmes, across many genres including Childrens', are now available on iPlayer.
We also have plans to extend the coverage of the service to include more of the BBC's weekly broadcast audio described programmes in the future. 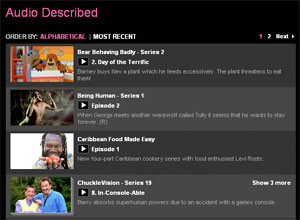 Now, if you already have a computer which is able to use iPlayer (and pretty much all computers do), together with whatever Screenreader or magnification software you use, you've already got all the technology you need.

All you have to do is to go to the "Audio described" category in iPlayer (or Children's iPlayer), look at the listing of the audio described programmes available from the last 7 days, and select the programme you'd like to play.
It's as simple as that. Give it a try.

Why has this taken us so long?

The BBC is the first broadcaster in the world to include audio described TV programmes in our video-on-demand service. Because of that, we have not been able to use existing technology from within the BBC or elsewhere to help us bring audio description to iPlayer. Our technology team (with our partner, Red Bee) have had to research and develop all of the technology and infrastructure to make it work ourselves.

And that takes time...

After investigating several delivery models and doing a lot of custom R&D to make this happen, we're delighted to be able to offer a solution which should not only work well now, but also be able to cope with any technology changes required by the ongoing advances in picture and sound quality which the iPlayer team are constantly working to achieve.

So what do you think? - send us your views

We hope you'll agree the wait has been worth it, and that the addition of audio described programmes to iPlayer will open up more of the BBC's TV programmes to our visually-impaired audiences, whenever you want to watch them.

Initial feedback that we've received from people in the blind and visually-impaired community is very positive, as this quote from someone on the blind support group TAFN shows:

"iPlayer does have audio description because I have just watched all the weeks episodes and I am impressed. There is a pause, stop button which is easy to locate and you can even restart the episode. If you go back again it will take you to the same place where it was if you listened last time. I find it very accessible and easy to work and I am very pleased with it. Only problem, it has made me start watching Eastenders again"

Now that sounds like a good problem to have...

If you have any comments or suggestions about how the accessibility of iPlayer could be further improved, we in the BBC Audience Accessibility Team would love to hear your views.