Today sees the launch of Shownar; a new prototype from BBC Vision which aims to track online buzz around BBC TV and radio programmes and reflect it back in useful and interesting ways, aiding programme discovery and providing onward journeys to discussion about those programmes on the wider web.

For as long as the BBC has been making programmes, audiences have been talking about them and we have done our best to showcase some of those conversations on-air, via programmes like Feedback and Points of View. However, it is only with the advent of the internet that those conversations have become accessible to a much wider audience. Here on bbc.co.uk we have a range of blogs, messageboards and other commenting tools, which enable users to talk about our output. However, much of the conversation about BBC programming inevitably happens away from bbc.co.uk on people's personal blogs or microblogging services such as Twitter. 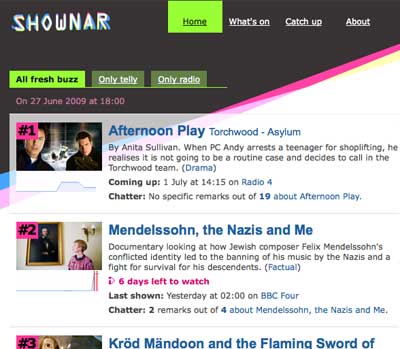 Shownar aims to track the wealth of activity that takes place around BBC progammes online and work out which are currently gaining the most attention. So why do it? To borrow from the site's About pages: "First, it will help you find shows that others have not only watched, but are talking about. Hopefully it'll throw up a few hidden gems. People's interest, attention and engagement with shows are more important to Shownar than viewing figures; the audience size of a documentary on BBC FOUR, for instance, will never approach that of EastEnders, but if that documentary sparks a lot of interest and comment - even discussion - we want to highlight it. And second, when you've found a show of interest, we want to assist your onward journey by generating links to related discussions elsewhere on the web. In the same way news stories are improved by linking out to the same story on other news sites, we believe shows are improved by connecting them to the wider discussion and their audience."

So, how does it work? In the first instance, we decided to focus on tracking in-bound links to programme-related pages on bbc.co.uk, so we could be confident that the discussions were actually about a BBC programme, rather than a different usage of, say, 'archers' or 'apprentice' (although intelligent keyword matching remains a future aspiration). Rather than develop technology to crawl the web ourselves, we decided to partner with data providers who were already doing that, and who could supply us with good, clean data. We took a look at a range of possible suppliers, and for this initial prototype chose data provided by Yahoo! Search BOSS, Nielson Online's BlogPulse (which indexes over 100 million blogs), and Twingly (which searches microblogging services like Twitter, Jaiku and Identi.ca for links, even when they are shortened using URL shortening services such as TinyURL and bit.ly). We are also ingesting data from LiveStats, the BBC's own real-time indicator of traffic. Once ingested, this data is processed according to a specially created algorithm to calculate the 'buzz measure' for every BBC programme - more detail on the algorithm can be found on Shownar's Technical information page.

The front-end interface offers a range of different ways into the data, from the 'fresh buzz' chart on the homepage, to the schedule heatmap which shades the 'hottest' programmes on each of the BBC's TV channels / radio stations (which also have their own pages). There is also a Catch up on iPlayer page, enabling you to filter programmes available to watch on demand by channel, genre and time of day. The genre cuts are particularly compelling, enabling you to see, for example, which Comedy programmes are generating the most buzz. There's also the blueprint, which provides full access to all of the data, including permalinks, so I can tell you that the most buzzed about factual TV programme at midday on Monday 22nd June was BBC Two's James May on the Moon.

The site has been live as an internal BBC beta for a few weeks now and it's already started to have a real impact on my consumption habits, introducing me to programmes I had missed in the schedules such as Radio 2's Back from the Dead: The Return of Spinal Tap, BBC One's Famous, Rich and Homeless and BBC Two's NASA: Triumph and Tragedy. It's also doing the job I hoped it would do in terms of onward journeys, with particularly rich discussion around Radio 4's The Reith Lectures. To find out how your blog links and microblog updates can end up on Shownar (and for information about moderation) visit the Get involved page.

We're keen to hear your feedback on Shownar, so please leave a comment below or send us your thoughts by email. If the prototype proves successful, we are hoping to integrate the functionality of Shownar into bbc.co.uk. Possible future developments include additional data sources and a full API.

Shownar was designed and built by Schulze & Webb, with input from a small BBC project team: Katherine Sommers, Mark Simpkins, Catherine Wingate, Yuri Kang, Andrew Barron, Chris Sizemore and myself. We hope you enjoy using it.