Last week I found myself in a lively editorial policy meeting discussing the BBC's use of Twitter and other micro-blogging services.

Filling the White City conference room to capacity, we were there to discuss the implications of micro-blogging on the BBC's editorial guidelines and what, if anything, we should do about it.

Rory Cellan-Jones, a technology correspondent who has been using Twitter for a couple of years, came along to tell us why, and how, he habitually shares his thoughts and ideas online. 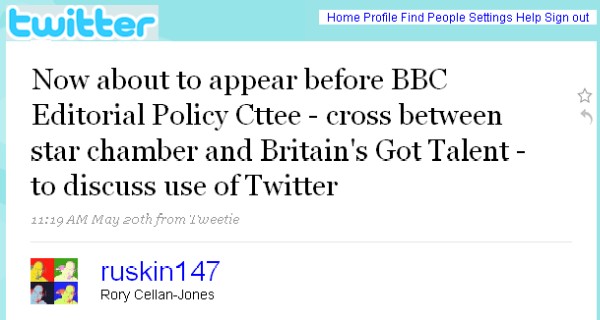 Rory's beat is technology, and he told us he'd started investigating social networking sites for The Today Programme. Rory initially decided that he was too old for social networking but didn't take long to change his mind and soon realised that he was hooked on Twitter. He joked that one reason he uses it is for "ruthless self promotion" but went on to say building a reputation (and a few thousand followers) had involved telling people what he's thinking about, getting ideas and leads for stories as well as handling responses to his journalistic output.

How far can you trust something you read on Twitter? "You wouldn't go to air with it any more than you would with something your mate told you", Rory reminded us. It's one research tool, but journalists are careful about how they use the leads they get, regardless of the source.

Steve Bowbrick, who regular readers of this blog will remember as the blogger in residence and an advocate for openness in the BBC, talked about how he uses Twitter to see what people there are saying about Radio 4, as well as joining the conversation using a Radio 4 Blog account on Twitter.

That's a good example of a BBC branded account. BBC Click and Big Cat Live are other examples. There are also plenty of individuals at the BBC making personal use of Twitter and other micro-blogging tools though, in the same way that there are plenty of us with personal blogs.

When the BBC created its blogging guidelines they were written collaboratively, with input from people who were already blogging, and shared as part of a set of editorial guidelines for personal use of the web. They contain specific advice for news and current affairs staff as well as guidance for managers on how they 'should not adopt an unnecessarily restrictive approach to their staff blogging'.

Although the guidelines are just as valid for a micro-blogs as they are for a traditional blogs, there has been a fair bit of discussion about the need to update them to provide clearer advice about micro-blogging tools, which is why we were meeting. Steve Bowbrick suggested that this was an opportunity for us to publish a package not of rules, but of 'principles and guidance', in which provide useful encouragement and support. Someone else pointed out that it would need to include helping people understand the dangers and the risks too. Rory agreed, and "Education rather than regulation" seemed to resonate with the room.

Rory summed up by saying that we should always want to be where the conversation is taking place.

"If there's a conversation going on, it can't be bad for us to be involved, but we have to be aware of the rules of that community"

Which was a great point with which to close the meeting; wherever we go to join in a discussion online, we always need to consider the norms and conventions of the communities we are joining.

The editorial guidelines will receive an update to give clearer advice on micro-blogging, but it won't be a clampdown. The guidelines will continue to grow and evolve as new ways to interact with our users are discovered, constantly building on a foundation of the BBC's values and helping people apply a healthy dose of common sense.