BBC iPlayer is now available on so many devices that we thought... what next?

We've ported iPlayer to iPhone, Wii, PS3, Nokia N96, Sony Walkman, Virgin Cable and all the other gadgets and devices at "where to get iplayer" - what's the next big thing?

Our marketing team identified breakfast television as an emerging market segment for on-demand viewing and asked the iPlayer team to see if we could come up with something new in this space.

After months of top-secret development and testing, and many burned developers, we're finally ready to bring iPlayer Toaster Edition out of labs.

The iPlayer Toaster Edition looks at first glance like a regular toaster, but with the front panel sporting a 7" 1280x800 OLED display. 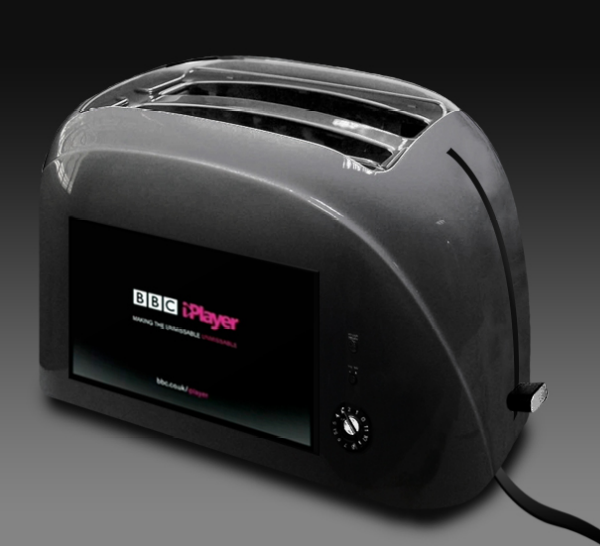 The touch-sensitive display is protected from the heat by special thermal insulation located behind the front panel. Device power consumption is a very eco-friendly 2 watts... until you hit the Toast button, when it rises swiftly to 2000.

The iPlayer Toaster Edition features built-in wi-fi, allowing you to stream your favourite BBC iPlayer TV and radio programmes direct to the toaster front panel. Audio is provided by two heat-proof speakers cunningly concealed within the toaster slots, which has the added advantage of shaking the crumbs off the toast - this feature can also be triggered either by the Shake link in the UI.

In keeping with the small form factor and 7" display, the UI makes use of our so-called "bigscreen" display, which is ironically optimised for small screens: 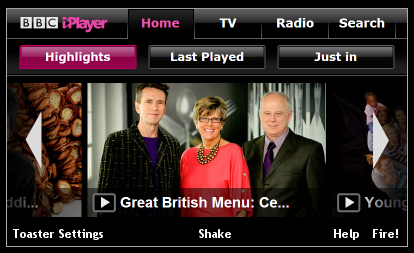 The built-in USB port is compatible with most portable media players, allowing you to transfer downloaded BBC programmes to your media player while your bread is toasting. As soon as your toast is ready, butter it, unplug your media player, and you're good to go with food and media on the move.

Our marketing team keep telling us about the importance of branding, so the iPlayer Toaster Edition can optionally burn the iPlayer play button logo into the toast using our new HD (High Darkness) rendering mode:

Another cool feature is the Digital Retraction Mechanism (DRM) which automatically withdraws and shreds any uneaten toast after 7 days. Initially the retraction mechanism was only compatible with some types of bread, but after criticism from organic bread consumers we managed to develop a full cross-comestible DRM.

Developing the iPlayer Toaster Edition has been hot and demanding work and our test team is glad it's done - frankly they've had it eating burnt toast, even though they did manage to catch up on the entire MasterChef series.

N.B. Editor's note - readers may be interested in other significant developments in media and technology today.