On Tuesday evening Steve Bowbrick -- our now former blogger-in-residence - gave his final thoughts on openness at the BBC.

Over a period of six months, Steve has been assessing how the BBC has embraced openness in its day-to-day operations.

Describing what openness means is, at the very best of times, rather tricky. 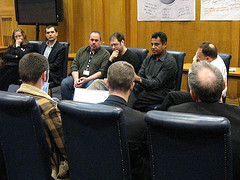 To begin the session, Steve produced his findings in a short speech (which you can read at the bottom of this post, or by clicking here). Roo Reynolds has a good break down of some of Steve's key points on his blog. (Photo by Rain Rabbit on flickr).

After his speech, Steve's thoughts were challenged, dissected and bounced around. For a blow-by-blow account, you can check out the discussion on Twitter. The BBC Internet Blog posts as @bbccouk.

Chris Vallance, from iPM, spoke with Steve after the debate -- listen to the interview over on Chris' blog.

Rain Rabbit has lots of pictures of the event on flickr.

As ever, we're intrigued to hear your thoughts on how the BBC should be 'open'. What would an open BBC mean to you?

What's openness? It's the uncomplicated, generous use of licence fee funding to produce content, code and other assets in forms that can be shared. It's a readiness to share the way we work and it's a commitment to do more of it in future, to steadily increase the amount of open-model media that we buy and create such that, ultimately, the only closed-model media left is that which simply can't be created in an open way.

Openness is not an end in itself. In fact the extreme version of openness imagined by some of the BBC's more nutty critics from the geek fringe implies a kind of dissolution of value by draining away proprietary value all together - a kind of heat death of economic value.

I like and advance the idea of openness because it's self-evidently productive of what the BBC calls 'public value'.

Open organisations make more efficient use of resources because they don't have to observe the complicated protections that apply in profit-making organisations.

The bounded organisations we call businesses are fantastically good at concentrating capital and talent but inefficient at distributing public value to the widest possible group.

The BBC inherited the shape of a business (although these concerns about institutional form were evident in the early change from Company to Corporation) but it's not a business. It's a machine for the production of 'public value'.

So I think there's huge potential public value - content, code, talent, laws and policies - locked up at the BBC - trapped in inappropriate structures, frameworks for ownership and exploitation that close off potential and reduce the value that can be applied in the public interest.

The broadcast era is coming to an end. The network era is well under way. Only openness can keep the BBC relevant through the transition.

So I want the BBC to be more open.

I want it to open up to the people who fund it and - more important - the people who underwrite its legitimacy (that's you and me). The closed, broadcast-era BBC sells me a licence to view the stuff it makes. In the open, network era it's the other way round - I licence the BBC to represent me and my aspirations in its output.

I want the BBC to set out its plans for the post-broadcast era (which is here now, in case you hadn't noticed). I want the clever people who work here to show us how they plan to replace old-man Reith's monolithic, centralised 'consent machine' with something more distributed, more open - something adapted to the network era.

I want to hear how the BBC can adapt to the shift from the creation of linear content to the creation of a library of tools and resources, open source code and rich, reusable content (some of which will still feature Bruce Forsyth) that will make things possible and create real opportunities for generations of British people.

I want to learn how the BBC will adapt its magnificent, industrial-era guiding principles - Inform, Educate and Entertain - to the manufacture of tools that support learning (formal and informal), creation (for love, for fun, for profit), enterprise (encouraging entrepreneurship), participation (in the democratic process, in society and institutions) and community (linking people, finding common ground, social coherence).

I want to see evidence that the BBC can create content and processes in a web-like way, that loyalty to arbitrary broadcast-era concepts and structures - channels and series and genres and so on - won't hold back the transition to new forms and ways of working.

I want to see that the BBC believes in all this, that there's an acceptance that fortress BBC is indefensible and that a retreat to 'what we do best' (the defence of existing brands and practices) can only make things worse. This is not about change for its own sake or about imposing trendy Internet novelties: it's about the survival of the Corporation and about its continued relevance for Britain.

And I'd like the BBC to do all this with real confidence and optimism and with a sense that the benefits of getting this epic transition right are incalculable. If the Corporation can tackle two or three really big, really ambitious open projects - liberating the archive for the nation's benefit, creating an identity platform that gives ownership of user data back to the users or pulling off some kind of Wikipedia mind-meld to blend the BBC's awesome editorial resource with the net's fastest growing library, for instance - the support and enthusiasm of the licence fee-payers will be much easier to secure and the whole task will seem much less daunting.

I have seen evidence that the BBC can create wonderful open assets, resources that can and will unlock extraordinary value out there in the network: software tools like Kamaelian and Glow (which are published under open source licences - Glow has a fully worked business case too), information architectures that are case studies for the open linked web of data. Dozens of individual projects, most of which are software but some of which live in departments that have historically produced linear content.

I have also seen evidence of resistance: real push-back against the idea that openness is a viable strategy for a PSB. Senior executives who see their principle job as protecting the income streams of creators, for instance.

But I've also seen evidence that the real barriers to opening up access to BBC content may not be as serious as we thought: a learning project, for instance, that wanted access to an edition of Panorama but were initially denied it because of rights issues. When they looked into it, though, they found that the programme could be made available for use at a cost of £175. The cost of running out a new tape without the music. This is common.

I've seen real, open-minded interaction with the outside world and with open assets like Wikipedia (Topics pages, /music, Tom Scott's /earth project) and, of course, the BBC's flagship openness project, Backstage (although I'm very worried that investment in Backstage may have stalled and that the team that runs it needs more love and a bigger budget).

I've also seen - post Ross/Brand - the arrival of the catastrophic caution that threatens even the most timid of exercises in openness. I'm editing a blog - the Radio 4 blog - and it's a great example of the way the instinctive generosity and openness of an organisation like the BBC can be translated into something lovely and useful. Mark Damazer's blog posts are simple and informal and genuinely open. But if you could see the number of names in the CC field for every new post as it's readied for the blog you'd be stunned by the BBC's caution and reticence about its own primary assets.

And to finish, my time here is more-or-less done but I expect that I'll be able to carry forward one or two of the projects that are currently in development: the Map of Openness (MoOp), which is going to be the 'GO TO' directory of open assets at the BBC. Rights Lab, an effort to invent and trial some new frameworks for the creation and sharing of content.

And an idea that I hope Nick will be able to take forward: the appointment of an 'open media editor' to work with Wikipedia and other open content and data sources. I'm also trying to identify a better use for the empty page that currently lives at open.bbc.co.uk.