Last week, the BBC iPlayer team put out an update which allows Scottish users to use the site in the Gaelic language.

This is the latest in a series of things we've done to build on the iPlayer's contribution to the BBC's role as a public service broadcaster.

One of the key themes of public service broadcasting is meeting the needs of audiences that tend to be neglected by commercially-driven broadcasters. Simply put, commercial broadcasters rely more heavily on a broad base of appeal for their programmes, so you get more 'middle ground' in their output.

The BBC on the other hand, is able to offer a more diverse mix of content.

Although many people think of the BBC as One Great Big Organisation, in fact the BBC is organised along more federalist lines. Aside from the 'corporate body' bit, where the BBC iPlayer team work, there are a whole host of regional divisions - such as BBC Scotland, BBC Wales/Cymru and the many local English outlets. (And not forgetting Northern Ireland.--Ed (with thanks to our Twitter following for pointing out the omission!)

Each of these divisions is empowered with the editorial autonomy they need to ensure we end up with a mix of content which is authentically local in flavour. The opportunity for BBC iPlayer is to reflect this diversity in the content we carry. At the same time, the sheer physical dislocation of these divisions means that they have evolved distinct production and distribution systems. The challenge is stitching these elements together so we don't expose our seams to the audience.

From the launch of BBC iPlayer 10% of the TV programmes scheduled for the service have been ring-fenced for regional programming - this is typically about 40 hours each week. A good start perhaps, but we felt this didn't reach far enough into what the BBC has to offer.

Over the summer, working with BBC Cymru, the team developed a new platform that allowed the Welsh teams to publish their programmes directly into the infrastructure that sits behind BBC iPlayer. This allowed us to make the 2008 Eisteddfod festival available to viewers and you can now catch up on Welsh-language shows like Mosgito and CF99. 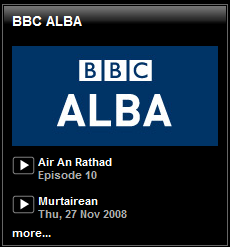 More recently we've extended our publishing capacity to provide a solid base of support for the newly launched BBC Alba channel which serves the needs of the Gaelic-speaking community in Scotland. This is a really useful complement to the broadcast service, particularly as digital broadcast services are not available in some of the more remote areas.

To state the obvious, what BBC Alba and BBC Cymru have in common is that the programmes are in the respective local languages. In a parallel stream of development, we've been working to bring the BBC iPlayer experience to these audiences in their own tongue.

First off the blocks was Welsh mode, again developed in partnership with the folks from BBC Cymru. You just select the Welsh-language ("Cymraeg") in the toolbar at the bottom of every page...

...and the site flips into Welsh mode.

Of course sites that have already established that users want to interact in Welsh can link users directly in to Welsh mode and save users from manually switching it on. Also, in a few weeks we'll be moving this selection into the user's preference settings in the BBC's Identity login system which will mean it is 'sticky' between visits.

As I mentioned above, we've just extended all this to provide a similar level of support for the Gaelic language. The basic concept is very much consistent with the other language modes and it looks like this: 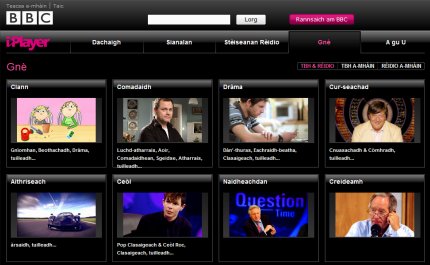 Of course, BBC iPlayer is a fast-moving service with new features coming along every few weeks, so please tell us if you notice any quirks with the site in Welsh or Gaelic mode - since our development teams are mostly English speakers, errors can be trickier to pick up in our test processes.

Up until this week, local radio stations were only part-integrated into the iPlayer experience. This meant that finding a programme was hived off separately and the playback experience was inconsistent with that for national radio. Last week's release changed all of that and we now have a fully joined-up experience across the entire radio portfolio. John O'Donovan's will be posting soon explaining this in full.

What's coming up next?

So we've now got pretty good coverage of both the local content and the languages people use, but what's in the pipeline for BBC iPlayer with a local flavour? First up, since the radio audience consistently tell us that they appreciate the ease of use and sound quality you get with the MP3 listening experience, we're broadening out the coverage of MP3 material across all the stations. Expect to see substantial progress on this starting now and continuing into early 2009.

Meanwhile, in television we're looking hard at our media management platform to identify the bits that don't work as efficiently as they could. By making more of the computing capacity, and reducing the need for unnecessary human intervention we'll be able to increase the number of hours of material we can deliver each week. Since the greatest opportunities for growth in coverage are around regional programming, this is the area where you'll see the biggest impacts of this work over the coming months.