Six months ago, we made BBC iPlayer available on Nintendo Wii.

This was our first foray into TV-connected gaming devices. We didn't know what the uptake would be, so we adopted a "keep it simple, get it out fast" approach. This meant encoding our content in a format compatible with the Wii's Flash 7 video playback capabilities, but playing back within the standard BBC iPlayer website, which is really too big for the Wii screen.

In other words, we made a new video stream for Wii, but we didn't optimise the user interface for the Wii's screen resolution or Wiimote remote control.

Strategically, this Wii release was extremely important, signalling the arrival of internet-delivered on-demand services direct to your TV set rather than to your computer.

However, as a user proposition, it was very much a first-pass product, something we knew and recognised at the time. In fact, one of the reasons why we didn't create a custom Wii interface was because our user interface team was hard at work on the new-look BBC iPlayer 2.0 site, which was to launch in June.

Back then, people also wondered why we made BBC iPlayer available on Wii but not PS3. The reason is simple: there are twice as many Wii units in the UK than PS3s, plus the PS3 browser had some odd quirks which have increased development time.

Good news: we have an all-new BBC iPlayer user interface designed for the Nintendo Wii.

This release is important for us because it adds to our list of BBC iPlayer user interfaces, which now comprises:

We hope, in time, to make suitable modifications which enable users of other gaming consoles and set-top boxes to use this user interface.

The new Wii version has a simplified user interface that presents just a few options on screen at a time and nice big chunky controls - easy to aim at with a Wiimote. 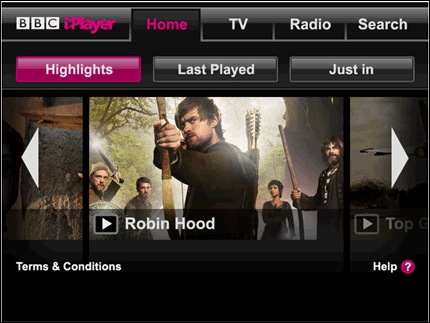 The new interface gives access to both TV and radio programmes: 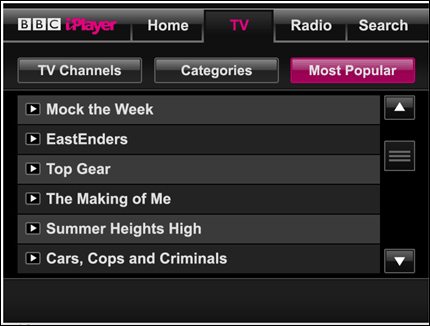 Our users told us that, when playing back BBC iPlayer programmes on Wii, they always wanted to play back in full-screen mode, not in a window within the browser as is often done on PCs, so the big screen interface is designed with that in mind: 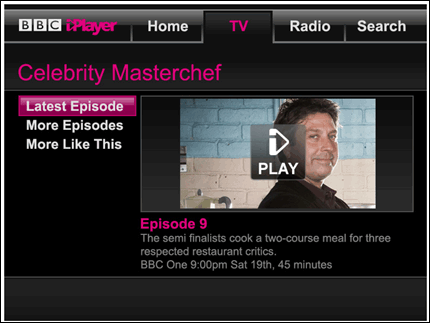 Choosing the most appropriate version of BBC iPlayer for your device is taken care of automatically by our servers. Head over to www.bbc.co.uk/iplayer and our server will take care of the rest.

If you don't have a Wii or run the Opera browser, you can still have a look to see what it's like: www.bbc.co.uk/iplayer/bigscreen (no guarantees that it will work with your browser if you're not on a Wii, though).

Finally, it must be noted that while we're providing an all-new user interface for Wii, the video stream is still the same video quality that we've been using since we went live back in March.

That's not ideal - but, alas, the Wii ships with Flash 7 which uses the older Sorenson Spark codec that gives lower video compression and poorer quality than the more recent On2 VP6 and H.264 codecs used in later versions of Flash found on your PC. We're very much looking forward to better quality video options on these devices - stay tuned for possible further developments on this front over the coming months.

So, if you have a Wii, why not try it out? Simply connect your Wii to the internet (you may need to also install the Internet Channel) then head over to www.bbc.co.uk/iplayer, then let us know your thoughts and ideas - we always welcome ideas and we try to take them into account when designing future BBC iPlayer releases.

PS: We're also working on bringing BBC iPlayer to Sony PS3, but we're not quite there yet as the PS3 uses a slightly older version of Flash which doesn't support some of the features used in our media player, and the very promising Flash 9 update now available on PS3 has some compatibility issues. Our Flash developers are working on it - stay tuned for updates.