Since we launched BBC iPlayer on the N96, I've seen a number of blog posts describing how the widget can be used on other Symbian series 60 devices (like the N95). At the moment, using the widget on devices other than the N96 is not supported - something we have been very clear about.

I can reassure andibeeb that this is not because the BBC has any kind of deal with Nokia to promote some types of phones over others. It is because we have not yet got the user experience on other devices to a point we are happy with.

While the mobile version of bbc.co.uk is a service that works across the broadest possible range of devices (even down to WML 1.0 browsers), Mobile BBC iPlayer is designed to be a much richer proposition. We have had to work very hard to get the level of user experience we are happy with and at the moment we have only been able to create that level of experience on the Nokia N96 and the Apple iPhone. The N96 improves on previous S60 devices in a number of ways like screen size and memory capacity, but one of the most important upgrades is with the way it integrates the browser and media player applications. 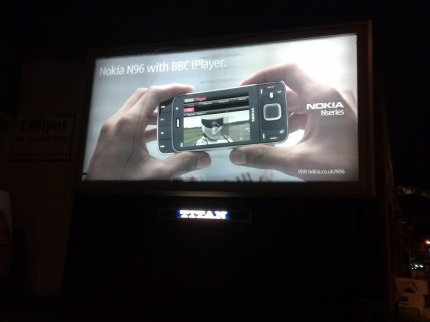 Previous handsets do not automatically carry the browser's current network connection settings over to the phone's media player. As a result, you could select Wi-Fi on the browser, but without knowing it end up watching streams over 3G connections. This could lead to you getting bigger bills than you were expecting.

Looking at how we could support legacy devices is one of the things that the team is working on at the moment and was something we have been looking at for a while but we have not cracked it yet. As I said in my original post, we want to introduce support for other devices as soon as we can and I will post more when we have some news.