N.B. Editor's note: Steve Bowbrick will be working for BBC Future Media & Technology as a "blogger-in-residence" for the next six months looking at, and talking about, ideas for a "common platform" and the BBC becoming more open. Make him welcome! 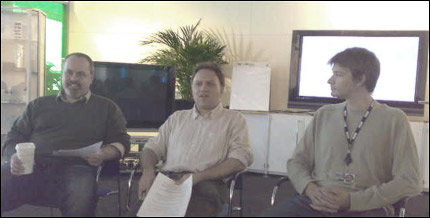 It's a truism that institutions that are important in one era find it difficult to maintain their relevance in the next. Everyone knows that the BBC in its second great era - the one starting about now - is going to be markedly different from the one that dominated the British broadcast ecology for the last 80 years. So far, so obvious.

The question, of course, is how will it differ? What will a national broadcaster funded by its viewers look like once the network era is properly underway? Can it survive in its current form at all?

Big questions. Happily. not ones that I plan to answer. Which brings me to my new job here.

I've been blogger-in-residence at BBC FM&T for a few days (I don't have my staff pass yet but I'm on the Beeb part of the Yammer microblogging system). I realise I've made it to 45 years old without ever working at the BBC, and it's genuinely exciting:

I find a big, breezy rather optimistic place full of brainy people (lots of them quite young) doing a huge variety of interesting things, many of which are aimed in one way or another at answering those big questions.

And the word that's on more or less everybody's lips is "openness".

• Should we be opening our banks of content and code to licence fee payers, entrepreneurs and organisations?

And for the BBC, these questions are given an extra urgency by the context: by the chaotic decline of commercial broadcast TV, by Ofcom's apparently unending review of public service media, by the troubled birth of the Kangaroo JV and even by Channel 4's bid for the social media high ground with 4iP.

So, fear of total systemic meltdown notwithstanding, over the next few months, I plan to roam the BBC's corridors - with my trusty guide Nick Reynolds - meeting everyone who has an opinion or an interesting project or a problem to solve with some relevance to the BBC's increasing openness and readiness to share.

I've been writing about this sort of thing for a long time (I've got cuttings going back to 1996) and not long ago, I helped to organise an event at Broadcasting House called The BBC: A Common Platform, which some of you will have attended.

You should bookmark or subscribe to commonplatform.co.uk [rss], where I'll be blogging everything.

Meanwhile, if you'd like to know more, or if you'd like to contribute to the project, from inside the BBC or outside, drop me a line or visit commonplatform.co.uk (and forgive me while I get the site finished!). And if you work for the Beeb and you see me in a corridor, stop me and say something entertaining.