There were two main challenges in redesigning the new version of BBC iPlayer:

A major part of the initial design brief was to offer, where relevant, radio programmes alongside television programmes. This was perhaps quite a controversial decision, as there aren't very many places on the rest of the web where this happens; however, we really wanted to offer both media so that a user interested in, say, history will be able to find the BBC's radio and tv output of an historical bent.

To start the process, we did a lot of brainstorming, creating user personas and mood boards and looking at equivalent non-BBC sites to find out which features make it easier for a user to find what that they want right away and for us to facilitate the discovery of new programmes.

For the visual design, we decided to continue the black, image-rich look, for several reasons. 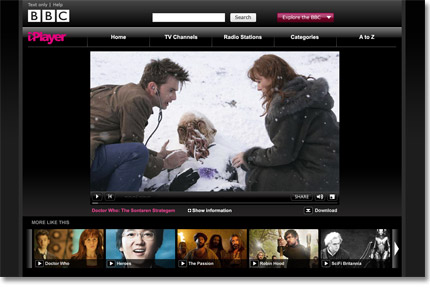 In terms of the interaction design, we wanted users to quickly and easily find a specific programme. Our solution was to add in proper list and schedule views and to group together multiple episodes of a programme, to avoid having to wade through 15 episodes of Chucklevision before finding Dragons' Den (or vice versa)!

Where a user isn't looking for any specific programme and just wants to find something entertaining to watch or listen to for the next 30 minutes, we developed the carousel feature which appears throughout the site, featuring big images and simple navigation to casually "flick" through a range of programmes. 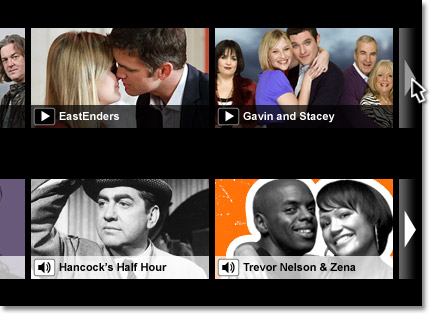 We also wanted iPlayer to become something people use more regularly, out of habit, on a day-to-day basis, so we added features like "Last Played" (which allows users to play programmes from where they left off) and telling the user ahead of time what's going to be available.

We were also keen to bring in the "widget" concept that's used at the new bbc.co.uk homepage to provide other ways of finding content. In future iterations, this is likely to be developed further to allow for a more personalised experience.

The final point in our design brief was to bring iPlayer more in keeping with bbc.co.uk as a whole. This involves bringing in the BBC header and footer which the previous site lacked, and using the new global visual language which is currently being implemented throughout bbc.co.uk. The global visual language is a set of guidelines which aim to bring more consistency to the site by introducing an underlying design grid and consistent design patterns, icons, buttons, image sizes and a pan-BBC audio/video player.

As a way of constantly reviewing our work, we also carried out several rounds of usability testing which had a big effect on the site design (particularly around the navigation).

We also conducted a qualitative focus group session of existing users of the iPlayer and Radio Player to gauge their "emotional response" to the new site. There is more quantitative research in the pipeline with a survey of 1,000 users - results are due in at the end of this month.

We're really pleased with the result and will be doing lots of iterations and refinements in the coming months. We're also currently working on implementing this new visual language throughout other iPlayer products across all platforms and devices, so whether you're streaming radio or downloading TV on your Wii, a television, or a mobile, it will feel like one familiar, consistent experience.

Your feedback is an essential part of this, so please do leave a comment.