I'm producer of the Sound Index, and it's great to see it being so well received by people on blogs, on the BBC Backstage mailing list and in the Observer. 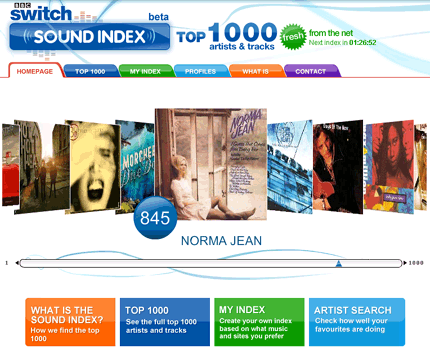 Obviously, I'm biased - but I genuinely believe that it's an exciting and innovative product.

However, in response to Mike Butcher's criticisms about not opening up the data, this is purely because it's currently a public service beta and, as it was intended as a proof of concept, has an end date of mid July.

Only if a longer-term future is secured for the Sound Index would we fully open up the RSS or other data. We don't want development to take place around data which could potentially come down and we would also need to shift to more a robust, longer-term server model to support this.

However, we have recently launched a widget of a top ten, both of the generic Index, and the customisable My Index, which does allow elements to be shared and embedded.

The Sound Index trial has been co-funded by both BBC Public Service and BBC Worldwide, as both were interested in investigating the semantic search and processing listing model. All running costs have been split between both IBM, whose Semantic Super Computing is used to crawl and analyse our partners' sites, and NovaRising who render the data and produce the front-end. The costs have included ongoing development as well as maintenance and hosting.

It is currently owned by BBC Switch, the new BBC offer for teens, due to the way in which teens consume and discuss music online and generate buzz about tracks and artists. There will be more functionality within the site added in the next couple of weeks, allowing more interaction and adding more value to the Index. However, we are keenly monitoring all feedback as the Sound Index trial is just as much about learning as it is about innovating - so please do leave a comment.