I started this blog post when I was on paternity leave with my first child, thinking I'd get it finished over a few days in my spare time.

Fool. As any of you with children know, there is no spare time with a newborn.

So, here I am now, having lived with - and used when I can - an Ubuntu Linux laptop for the last couple of months. I've been trying it out alongside my usual laptop (Sony Vaio running Windows XP), my new MacBook Pro, and a Vista notebook that we also have in the house.

Firstly, the most obvious advantage of Linux is that it's free (as in cost).

Free is a big advantage. It will, I hope, presage an entirely new range of inexpensive Linux-powered laptops - such as the Elonex £100 machine - that might fulfil an increasing need for web surfing (and iPlayer-type A/V consumption) on the move, with a bigger screen than phone handsets allow (notwithstanding the beauty of the iPhone's display), but much cheaper, smaller and simpler than current laptops.

The second big advantage of Linux is also obvious: it's free as in speech - or "open source" - and therefore any code created on this machine would be available to anyone else, free. (Not that I am about to start hacking into the LAMP stack, my serious coding days ended with Oracle some 14 years ago.)

I make these rather obvious unique-selling-proposition points about Linux because on their own - free and open source, they may well be compelling enough reasons for many to go the Linux route. Putting that aside though, I am intrigued as to how well Ubuntu stacks up as a consumer proposition, next to the might of Windows and MacOS.

Again, for many, this home test might be seen as a pointless exercise, as Linux is currently more frequently used at the enterprise level. (Indeed, a good proportion of bbc.co.uk runs on Linux servers.) The reason for Linux's use in corporations is usually because of its extremely compelling combination of price, performance, reliability and maintainability benefits borne out of (if I understood Jono Bacon correctly), both its relative simplicity / elegance of the design of the core OS, and the fact that at any one time there are literally hundreds of thousands of developers around the world working on improving the code.

But if Linux is going to be a substitute for Windows / MacOS, then I believe it needs to be an easy-to-use, reliable consumer proposition too. I'm no expert tester, so the following comments are merely my own, personal, experiences.

So, I did the ten things I might most commonly do on my XP machine, on the Linux laptop:

1. Installing the OS With the help of George in the office, we put Ubuntu Linux on to an HP laptop. Installation was straightforward.

Initial impressions of an OS with all the tools you need, but without extraneous, memory and hard-disk gobbling consumer apps that I won't use.

2. First thing at home, accessing my wifi Elegant. Easier than Windows: just worked; no hassles. Trying this at work: easy, and get a list of all available networks with the signal-strength of each network displayed in a simple well-designed table. Logging on the next time, it connects automatically and incredibly quickly to the office wifi. I'm already starting to like this.

3. On to the web, and to the BBC homepage Using Firefox, which over the last couple of weeks, appears more stable than Windows IE, and on a par with the Mac's Safari. Initially needed help to get it to display new BBC homepage properly, and the clock in the top right still sits on a black background rather than the colour of the rest of the page. Small quibbles, and ones that are probably caused by our setup rather than Firefox on Linux.

4. Go to BBC iPlayer Streaming works beautifully. Download service to come (please do not make all your comments about this point, which has been discussed before on this blog for example here).

5. Installing Skype With my sister living in Oz, and now an auntie, getting Skype video up and running has a new impetus. Installing the Ubuntu FeistyFawn version of Skype was easy, but I couldn't get access (Server connect failed message). On Windows and Mac, everything worked fine, first time.

It turned out I had installed an old version of Skype (I suppose quite easy when there is no central management of software releases for the few non- free / open source applications on Linux). The external webcam I have also worked out of the box with Windows (obviously, as it had a Windows disk), but I could not find any driver easily that worked with Linux. 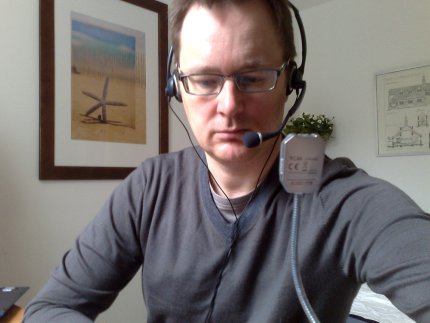 George Wright to the rescue with both of these issues, finding the latest version of Skype (albeit a rather simpler version than the Windows one), and, after a long hunt, finding a driver for the external video webcam. I appreciate a lot of drivers are preinstalled, but I'm starting to feel that perhaps the Linux OS is not aimed at my kind of usage (or my lack of time to invest in getting it all set up right).

6. Try some online banking Annoyingly, my bank explicitly doesn't allow access using Linux, for security reasons. Note to self: change to an "open" bank. Actually, what are the implications, if any, of trying online banking via Linux? Do any / most banks enable access? A partial list of UK banks and their support for GNU/ Linux is available here - but I have no idea of its accuracy.

7. Before progressing any further, decide to update my OS There are 67 updates: this is either great news, or a worrying sign of work-in-progress. The updates took 20 minutes to install. Didn't need me to reboot the computer though, nice.

8. Getting photos from my phone onto Flickr Now an easy task. Uploading photos from USB memory stick reader to Flickr. First, the card was instantly recognised and photos dragged to the desktop. Great. Then tried to install a Linux Flickr photo uploader. Flickr themselves don't offer one, so went to their recommended link to jUploadr. Unfortunately, the site was down.

Right, let's use their web-based form (at this point I discover that the screen flips sideways if you have a dialog box wider than the screen to a new "workspace": beautiful). The web-based photo uploader worked, and latest photos now on Flickr.

9. Then played around with image editing software on my desktop Basic, but simple and slick. This is becoming a theme with Linux. Don't expect the bells and whistles or much support from other websites (e.g. my bank, Flickr, Skype, some p2p sites etc.) and you'll be fine.

10. Finally, editing this blog post in word processor OpenOffice Very similar to MS Office's Word. Saving the file in the open ".odt" format means of course that Microsoft Word refuses to recognise it. I am starting to feel the open source community's frustration! I could have saved in Word format but this wasn't obvious at first, and a slightly scary dialogue box suggests that this is a Bad Thing to do.

So, there you have it. I've enjoyed using Ubuntu, it has a simplicity and elegance that I like and some great features that other OSes don't have (and I appreciate that I've only been scratching the surface). And it's free.

But I'd say it's horses for courses. For enterprise-side usage, or as a developers' workstation, or as a cheap platform for people with a fair amount of time on their hands and a willingness to deal with all the websites that only vaguely support Linux, fine.

For me, as a day to day operating system, would I churn from Windows or MacOS for it? Not yet; perhaps in a year or two. Critically though, I think the BBC can, and should, do more to support the Free and Open Source community, and I hope this has at least shown my commitment to listen and learn!