Last week, Dublin saw a gathering of software engineers, information architects and technologists to discuss The Web On The Move at the annual XTech conference.

For years we have been developing and promoting open data standards, enabling data portability. Recent developments have led to web-wide programming APIs and virtualization. It's no longer just our data on the move, it's our applications and even our servers too.

A few of us were there to talk about our development of the programme ontology, the upcoming BBC technology refresh and the new Identity framework, and APML and the attention economy. 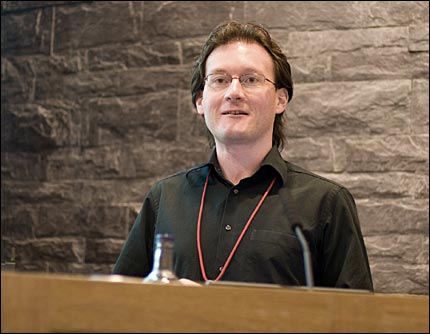 As you might expect, there's a real sense that we are at a tipping point - a sense that the technologies are starting to enable a new set of opportunities. But this isn't just wishful thinking - there are more companies adopting the underlying technologies which enable data sharing and portability.

As David Recordon of Six Apart noted in Wednesday morning's plenary, open software and hardware have become hip and have given small groups of developers the chance to build interesting web apps - and, more importantly, the chance to get them adopted. This is a new wave of web companies which expose their data via APIs and consume others' APIs. And what is interesting about these companies is that they are converging on common standards - in particular, OAuth and OpenID.

OAuth is a way to share abstract information. It allows you to authorise third party applications and rights over specific features in other applications.

So, for example, you can authorise Dopplr (a service that lets you share travel plans with your friends) to find other Dopplr users within your GMail email account without having to give Dopplr your email address and password. (Giving your password to other people or services is, by the way, a really bad idea.)

And speaking of OAuth, it was great to hear Kellan announce that from June 1st, Flickr will be supporting OAuth alongside the existing Flickr Authentication API. I think that this is really going to be the year we see large-scale adoption of OAuth, which is a good thing: after all, there really is nothing not to like.

The other technology that has quite a buzz about it is XMPP, a messaging and presence protocol. Wednesday afternoon saw Matt, Rabble and Seth stand in for Blaine to run a panel session answering questions about XMPP.

Parts of the web are becoming more and more about real-time conversation - see the rise of Twitter and the recent release of instant messaging in Facebook and presence services like Fire Eagle and Plazes. http isn't a great solution to deliver this kind of real-time data. It's not great because it's very inefficient - to keep up to date, a client application needs to poll the server every few seconds to check whether there's an update and the server needs to deal with this request, even if there is no update. But it needs to work this way round, because http can't push or broadcast information. XMPP can, because it can notify all of the clients that have subscribed to the XMPP server of the update.

Here at the BBC, Matt Wood has been playing around with XMPP, exposing EPG data via XMPP:

At the start of every radio broadcast I'm publishing metadata about that show to its station's node, wrapped in an Atom Entry. For your Linked Data entertainment it's also serialised as Turtle RDF conforming to the Programmes Ontology. 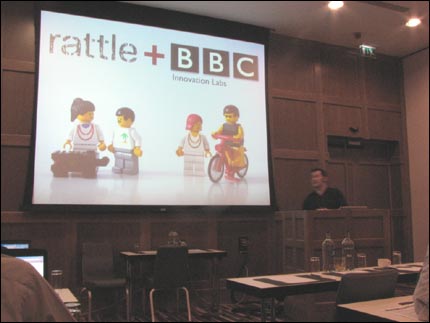 A final thought: it's also nice to hear about organisations that are exposing their data in machine-readable formats. In addition to our own work on exposing BBC programme metadata as XML, YAML, JSON and RDF, Jeni Tennison from the UK's Stationary Office presented their work to add RDFa to the London Gazette.