Yesterday, we launched a visual refresh of the BBC News and BBC Sport web sites, which follows on closely from the launch of embedded audio and video (see John O' Donovan's previous post) and is the latest phase in an ongoing process of iteration.

Our aspirations for this phase can be boiled down to this simple design goal:

we wanted a fresher, more modern and open look that makes better use of both horizontal space and photos.

In response to Steve Herrmann's and Ben Gallop's posts about the refresh, we had almost 1,000 comments by late last night.

There's a lot of useful detailed feedback that our technical teams are sifting through (thanks!) and several themes about the design have emerged:

Many of you are happy that we're now making better use of available horizontal space, but many have written (like Gareth Jones) that you now have to scroll horizontally to see the whole page.

We thought long and hard about the right moment to move to a new width. Go too early and we risked leaving too many people behind. Wait too long and we have an increasingly dissatisfying experience for a growing majority of users.

Our conviction that we'd reached the tipping point was borne out by the increasing amount of feedback we'd had from you about the old site not making good use of the horizontal screen real estate.

As Steve Herrmann and Ben Gallop have both mentioned, 95% of you have your screen resolution set to 1024 pixels wide or wider. And that number is growing every year.

As Richard Titus mentioned in his most recent post, this new width, which is part of the new pan-BBC language we'll be rolling out onto all of the BBC's new and redesigned sites, is still conservative compared to sites like Yahoo!, MSN, CNN and Sky.

A lot of you (like Robin Fisher) have praised the new design's use of white space, while others (like John Daniels) feel that it's too much.

Some have also mentioned that you have to scroll vertically in order to see the same amount of content that you used to see without scrolling.

We added the extra white space because a number of users told us, through surveys, listening labs and usability tests, that the previous design was starting to look "cluttered" and "busy". And many of you say you like the updated look and the extra room to breathe. So we'll continue to pay close attention to your feedback on this, both positive and negative, to see if we need to adjust the balance.

Several themes in your comments are about the new global masthead, which is part of the new pan-bbc.co.uk visual language.

Unfortunately, there were some last-minute development bugs and we weren't able to launch with the complete new global navigation, instead launching with the placeholder you've commented on. Now that we're up and running, we’ll be working hard to fix those bugs. In the meantime, here's a sneak preview of the global navigation, including the "Explore the BBC" menu, which offers easier access to more of the BBC than ever before. 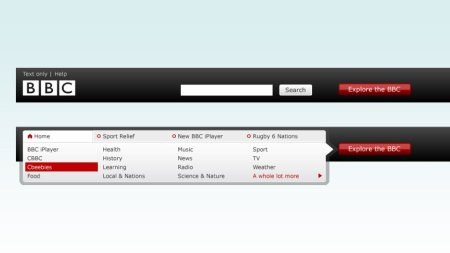 Julie Dodd will be blogging in the next week or so about the new BBC visual language, which is a big part of our work to modernise bbc.co.uk.

Some of you think that the type colours are too light. We'll explore this more as you settle into the design.

Several of you have said it'd be great to have more customisation on the BBC News and BBC Sport sites, and you're asking not just for content customisation but also for customising the page width to stretch with the browser or device.

This phase of the "site refresh" is just one of many planned over the next year, and our plans include adding more customistion in a later phase.

What we focus on next will be determined in part by the feedback we get to this first phase - so keep the comments coming!