Editors' note: This is a post based on an article in this week's edition of Ariel, the BBC's in-house weekly magazine, by Audio & Music Interactive's Head Of Distribution Technology John Ousby. John mentions prototype work on social radio that has been attracting attention across the web: among many others, Digital Spy links to the development of the Olinda hardware prototype and TechDigest even calls for "a BeebPhone, with a DAB receiver inside"!

On the subject of Olinda, Radio Today quotes AM&I's R&D man Tristan Ferne from the Radio At The Edge conference:

It shouldn't just be the BBC. This is really for all radio stations. I'd like your help.

If you have any thoughts on social radio, do please leave a comment below. 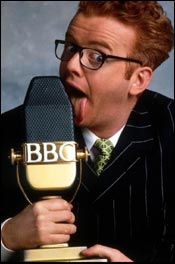 Blowing The Trumpet For Sharing

Rewind to the early '90s. I was walking to Catford station, radio in my pocket, listening to Chris Evans and company on his astounding GLR breakfast show. He jumped into the "honk your horn" feature. Suddenly, several dozen horns blared out around me. I felt like I was part of something bigger - a solitary experience was transformed into a shared one.

Despite presenters finding new and fun ways of uniting their audiences, shared experiences around radio and television have dwindled ever since radio stopped being a piece of furniture and moved to the pockets of youngsters keen not to share their parents' taste in music.

We are witnessing the growing popularity of content on demand and the increasing range and take-up of audio and video consumption on portable devices is growing. So should we be bothered? I think we should.

Of course it is possible for large numbers of people to share experiences in the on demand world. Look at YouTube, iPlayer and the Radio Player, where increasing numbers of people are asynchronously consuming the same content and commenting, rating, tagging and even talking about it later. There's something about sharing a live experience which adds a layer of depth to the relationship we have with our media.

Real social networking, where people from diverse backgrounds come together around their passions and interests, has great social value in an environment of increasing diversity and ghettoised communities.

There are some interesting early developments that new technology is making possible.

Take the UK Film Council. They have put digital projection into a third of UK cinemas and has been dipping their toes into social networking around film through myfilms.com for nearly a year now. What they are looking at now though is how they can use their infrastructure to allow people to choose what they want in their local cinema, breaking out of the cycle of two weeks of blockbusters followed by obsolescence until DVD. So, apart from opening up the long tail of film to a wide audience, the council could create opportunities for virtual communities transitioning to real world shared media experiences.

The German company Viif has developed an interesting application for the mobile phone where you can invite your friends to watch video clips with you, using video calling. You can see your friends and communicate with them while watching something together. This is a small step away from what is possible on Skype conference calls and MSN already, with kids chatting about what they are watching while attempting to do their homework.

In BBC Audio & Music interactive, we have developed a prototype radio with DAB and WiFi which allows social listening; you are alerted when any of your friends are listening to radio and have the option of tuning in to the same station. The radio knows what you and your friends are listening to, creating the backbone for recommendations and social networking around your radio tastes. The BBC developed the prototype, codenamed Olinda, with Schulze & Webb who are blogging about it here. 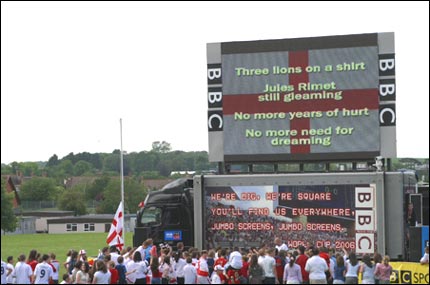 It's not all new, of course. Test the Nation on interactive TV, the Jonathan Ross mobile quiz and the innovative things being done on the BBC big screens around the country, to name a few, have all provided great insights into mass participation and connection around live media.

"Honk your horn" was forced off the air when the police branded it a traffic hazard. Hopefully new ways of uniting people around live media won't come to such a premature conclusion.