Yesterday we launched embedded media (see an example here) across the BBC News and Sport sites.

We are starting with just a few stories, but over the next few weeks, we will be converting most of our video and audio to be embedded. 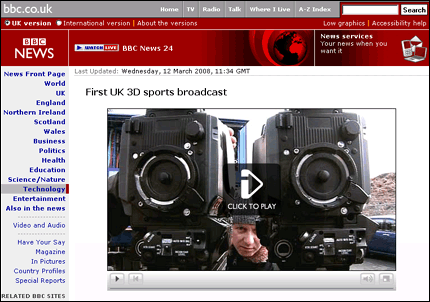 We're using an embedded media player which, within the BBC, is known by the secret code name of the Embedded Media Player - or EMP. This is a new site-wide media player built by the Journalism and iPlayer teams. More about this further down.

"So what does this change on the site?", you may ask.

Currently, our audio and video appears in popup windows using Real or Windows Media formats, which you get to by clicking on the Watch / Video or Listen / Audio links that you see in stories. You can see some examples in this story underneath the main picture.

This approach has served us well, but it was apparent from trials we ran in the middle of last year [for example, here], that in general, people find embedded media easier to engage with. No surprise there, as the unstoppable march of sites such as YouTube has proven. However, Pete Clifton also talked about how this may change the way we make video and provide added value to the stories it is associated with.

It has taken some time to put all the pieces in place to make this change, but there are a lot of moving parts to adapt without breaking anything that is being used on the live site.

For those who are interested, these media are created as clips (30sec - 3min long) and are submitted from all around the UK (and beyond) to a system called the MPS (Media Publishing System), which routes this media to the correct destination, transcoding it to the correct output format on the way.

Previously, this would be Windows and Real in both narrowband and nroadband versions for both formats. We also keep a higher quality copy so we can make further versions if required. Now we will only be making a Flash version for most video and audio, along with the archive copy. Life has just got a little simpler for us making the video and for the audience in engaging with it.

Once media are made available by the MPS, the CPS (Content Production System) is made aware of this and allows this video to be linked to stories. A big change here is that previously, the media were "hidden" in a popup console and not integrated with the site. With embedded media, each piece of media will have its own page (called a Media Asset Page or MAP - here's an example).

Apart from our obvious Talent In Creating Acronyms (TICA), you will notice that the MAP will then act as a permalink to the video or audio and is the destination to use when linking back to media items in general, especially to display video at its full size of 512 pixels wide. This media can then be linked to one or more stories, where it is placed in context within the story and will be displayed at either 400 or 256 pixels wide sizes, depending on where it is placed.

Bearing in mind that there are hundreds of users of the MPS and CPS systems generating hundreds of media clips each week, it has taken time to adapt these substantial systems and start to train users in the changes that embedded media will bring.

Putting that little embedded player onto the site has sent ripples of change through all of BBC Journalism.

On top of this, we have built the EMP in collaboration with the iPlayer team to be a unified player for all video and audio. This has meant decommissioning some other players, but over time there is little reason to have multiple players with different technical approaches. This is all about creating a consistent and familiar user experience for as much of our audience as possible. The EMP is not the same as the one currently used in iPlayer though it may look similar. It is a new application and will support a variety of new features.

A significant change for our international users will be that they will now also have higher quality Flash-based media akin to that served in the UK, rather than lower quality streams of Real or Windows Media. If you are interested in how this all works, then let us know and we will explain in a future blog post.

So the EMP is a small but feature rich and complex little application. Once it is rolled out across the Journalism sites, it will then be rolled out across the iPlayer and other BBC sites, and so needs to support lots of features and scenarios. There will be more information on this soon. Note, you will eventually be able to syndicate and embed BBC video in your own sites.

There will be some exceptions to using the EMP for now, generally where the media experience is heavily stylised or embedded within interactive games. We are also not moving live streams over to Flash yet, but aim to do so by the summer.

So, embedded media at last: it may look like just a small lonely video on this page, but it is the start of something big. The Technology and Sport sections is where we are rolling out the first changes to include embedded video over the next few weeks, so have a look and do let us know if you have any ideas about how you would like this to develop.