Some very interesting pick-up on our announcements yesterday about the 2m+ users of the iPlayer so far, and the strong growth in usage that we've witnessed since the Christmas day launch, seeing us break through the half million programmes mark on one day last week.

My answer: quite possibly, and let's hope so - but let's give it six months. 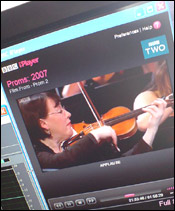 It's true that all on-demand TV services have seen an up-kick off the back of iPlayer, which is great: the real "Freeview over IP" moment will come I believe when, through a range of services such as iPlayer, the upcoming Kangaroo, and a BBC Archive proposition, the UK audience will be able to get practically any programme ever transmitted, on-demand. Lots of work still to be done here, but we've reached the tipping point for broadband TV, I believe.

One of the comments to Mark's blog post answered another question asked by blogger Iain Dale: "why does the BBC intend charging us twice for watching their programmes", referring to BBC Worldwide's deal to offer programmes through iTunes for £1.89.

'Phazer' succinctly answers this question of whether the licence fee payer hasn't already paid (through the licence fee) for a BBC programme offered via iTunes:

No, you paid for the BBC to licence the content for temporary broadcast. If the BBC were to licence it for copies to keep forever, the licence fee would have to be £800 a year. So, just as with BBC DVD's, they're sold, as then a percentage can go to rights holders.

This is an issue that comes up frequently. The fact is that even with the volumes far exceeding our plans, there has been negligible impact on the UK internet infrastructure. This is not to say that we're complacent, or do not take the issues of network capacity seriously; we do.

There may be a win-win for the industry where services like iPlayer drive demand from users for broadband access in the first place, and for higher bandwidth packages, and for (paid-for) quality-of-service guarantees from the ISPs. At a very constructive dinner I hosted recently with the ISPs, mobile network operators, and content providers (02, Virgin, CarePhoneWarehouse, BT, Tiscali, C4 and ITV amongst others), we agreed it was in no-one's interest to see the UK internet struggle.

The post does touch on a further interesting point, that "Despite access unbundling, 'middle mile' costs remain a key bottleneck", i.e. that well before we need a fully fibre end-to-end broadband network in the UK, there will need to be an upgrade to the UK's "back-haul" network.

Put another way, fibre to the home from the box in the street may not be needed for quite some time, and the core fibre backbone across the UK also has plenty of capacity. But the bit in the middle may need upgrading, and more competition may be needed to stimulate building this key part of the distribution chain.

Coincidentally, I was showing Ofcom CEO Ed Richards around a number of our new projects yesterday morning here in White City, and this exact subject came up. Something we've already touched on here and reported on BBC News, but when the industry regulator takes notice, so should we.

He posed the very interesting idea of the government encouraging using other infrastructure, such as sewers, to lay fibre optics down to create this new capacity in this "middle mile" business (the existing telco cable ducts being apparently totally full), and sent me a couple of links to companies operating in this space, including this article in yesterday's Independent. The business community has responded favourably.