It's a while since I've appeared in this kind of place, and I now have a different job with an unimaginably long title requiring a six inch business card.

I'm tasked with overseeing all the multi-media developments we have planned in Journalism at the BBC across the next five years - and that includes News, Sport, Weather, the Nations & Regions and Global News. All the plans are designed to make our excellent content more easily available on any platform, whenever and wherever the audience wants it. It promises to be quite a ride, and maybe I'll pop back from time to time to give you an update on what we are up to.

Anyhow, within this rather wide remit, other projects emerge that need me to get involved. One of these is "digital democracy", which some of you may have read about in Mark Thompson's speech a couple of weeks ago. It was a good read and the section most relevant to digital democracy began:

We want to take our coverage of Westminster, the Scottish Parliament, the Welsh Assembly, the Northern Ireland Assembly, the European Parliament, as well as local councils up and down the land and turn them into the most engaging, the most creative multimedia portal for democracy in the world, using BBC Parliament and our other television, networks, radio, the web and mobile. 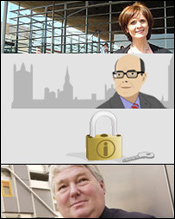 I'm now working through the detail of what that could mean in reality: what it might look like; how could it be really useful for the audience and what we could start doing by when. And having the Director General talking about it so passionately gives it all a certain focus...

Some things are very clear. If you look around bbc.co.uk, there is already a lot of coverage of our democratic institutions. On the News site, BBC Parliament, around the UK and many, many more places besides. There are high quality correspondents offering real insight like the unstoppable Nick Robinson and Betsan Powys, a multitude of debates and no doubt more guides than you could shake a stick at.

And when you look outside the BBC, there is also a lot happening. Some of the institutions themselves are showing real ambition and projects like Tom Steinberg's mySociety have innovative ways to engage the public in more relevant ways to the democractic process.

The BBC's public purpose around informed citizenship means it must play a vital role in this area. We already offer more day-to-day coverage of our institutions than anybody else, but a dynamic portal that brings together the best of what we have in audio, video and text, the best that others are doing, something that is easy to find, searchable, personalisable and sharable, feels like a fantastic goal.

And now the thinking has begun, I'm also eager to hear what the audience thinks about all this, and what they would like most from the digital democracy project. I await your thoughts with much anticipation.