Pic Of The Day: Ada Lovelace

A new feature, with images from around the BBC or places where BBC people are going so we can talk about what we're doing.

We thought we'd start with a picture of the largest meeting room in the home of the BBC Internet Blog, the Broadcast Centre. It's at the top on the fifth floor and is known as Ada Lovelace. 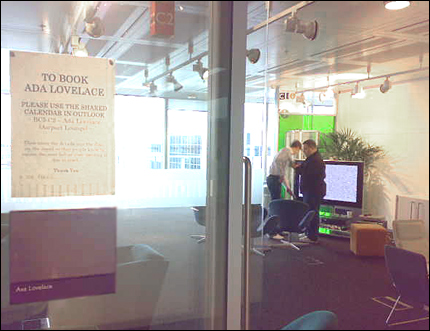 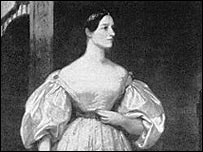 If you've seen the political comedy The Thick Of It, you'll be familiar with the open-plan nature of the Broadcast Centre, as some of it was filmed there. The meeting rooms dotted along the staircases are all named after pioneering figures in design, technology and innovation. So the unglamorously-named BC5C2 also bears the more striking name of Ada Lovelace.

Ada Lovelace (1815-1852) is important around these parts, not because she was the daughter of Lord Byron, but because of a love of numbers fostered by her mathematician mother which led to her work with Charles Babbage on his Analytical Engine - the forerunner of the modern computer.

Babbage himself didn't see as clearly as Lovelace the uses to which his imaginary machine could be put, including graphics and the composition of music. So as well as being possibly the first programmer, she also foresaw a world with Finding Nemo and the Aphex Twin [check out those artist pages!].

Lovelace gave her name to the programming language Ada, to a medal awarded by the British Computing Society, and to our meeting room, in which are born many of the projects discussed in this blog and where, if you wanted to, you can find an award for myBBC!

You can listen to audio on Ada Lovelace at the World Service's Learning English site, read the h2g2 entry or look at this news article on inventive women.